Updated : June 04, 2019 08:39 AM IST
Over the last one year, the share of quarterly slippages from top private banks has increased while that of top PSU banks has declined.
Highest decline in slippages were seen from Canara Bank, Federal bank and Bank of India.

We did mention in the review of Q3FY19 results that the giant has stood up but its knees are trembling. Well, in Q4FY19, banks are back to making losses; but it’s no sleeping giant reporting losses as outlook now seems brighter than in the last two years. For the first time in 14 quarters, net NPA ratio of the PSU banks is below 5 percent thanks to these banks making higher provisions and write-offs (write-offs do carry 100 percent PCR). Net NPA ratio was as high as 7.9 percent in Q4FY18. Over the last one year, the share of quarterly slippages from top private banks has increased while that of top PSU banks has declined. Q4FY19 is the first quarter in last four quarters where there is a deterioration or rise in slippages on a sequential basis for the top banks. YES Bank reported its first and highest ever loss in last 10-15 years owing to steep increase in stressed assets and provisions. Analysts cut estimate by as high as 30-45 percent range; highest cut in earnings seen amongst private banks estimates in history. IDFC First Bank continues with its net loss momentum as well for second quarter in a row.

Banking sector has now reported losses for fifth time in six quarters. PSU banks loss run rate continued for 9 quarters in a row while private banks reported lowest profit in last three quarters. Biggest losses were posted by Corporation and IDBI Bank; while highest profit growth was seen in J&K Bank and Federal Bank. IL&FS exposure was a key stressed account which almost all of the lenders have classified as NPA and had higher provisions. There is worry for the banking sector with respect to exposure to ADAG, Jet Airways (some have classified it as NPA), DHFL, real estate sector, NBFC sector, Zee group, etc. where pledged shares are being revoked and need to be seen as to how banks classify these accounts in Q1FY20 results. The outlook is brighter in terms of PSU banks’ earnings outlook as they have used the heavy capitalisation from govt to strengthen their balance sheet and are looking for healthy profits in FY20. On an average, PSU banks now have a provision coverage ratio of more than 70 percent. PSU banks have also strengthened provision coverage ratio on their NCLT accounts to >80-85 percent. Recovery from these NCLT accounts will be huge earnings booster for PSU banks.

For the record-breaking banks in Q4: Six banks came out of the prompt corrective action framework of RBI in Q4FY19: Bank of India, Oriental Bank of Commerce, Bank of Maharashtra, Allahabad Bank, Corporation Bank and Dhanlaxmi Bank. Dena Bank was under PCA, but now is a merged entity (with Bank of Baroda). While Punjab and Sind Bank is still standing on the verge of being put under PCA framework of RBI. IDBI Bank continues to have the worst book amongst Indian banks while Ujjivan and RBL Bank have the best book as of Q4FY19 (IndusInd Bank had held this rank till Q3FY19). The deposit growth is hard to come by (at higher rates) and majority of the banks are not opening their sanctioned line for disbursements. So, growth in business needs to be seen in Q1FY20 while there is slowdown in the economy. Many of the private banks have a credit-deposit (CD) ratio above 90-95 percent levels. The CD ratio of PSU banks are below 80 percent. Bond yields are at multiyear low which can provide cushion for treasury income in Q1FY20.

Market share of PSU banks continued to deteriorate, but in Q4FY19, is the lowest market share loss in last 4 quarters. PSU banks are now better capitalised than ever in the last three years. Some of them are still in pain like PNB and Allahabad Bank, but majority of them are out of the woods now. Recovery in NPAs or stressed accounts may not be possible for the first two quarters of FY20 (except for NCLT cases), but one may see gradual and healthy recovery from NPAs or stressed assets from Q3FY20 onwards.

Slippages are loans which turn into NPAs as payments are due for more than 90 days. The negative impact that slippages have for a bank is they lead to lower interest income while higher provisioning and thus denting the earning capacity of a bank. Its vice-versa impact, i.e. declining trend of slippages coupled with loan growth, means better earning capacity of the bank. 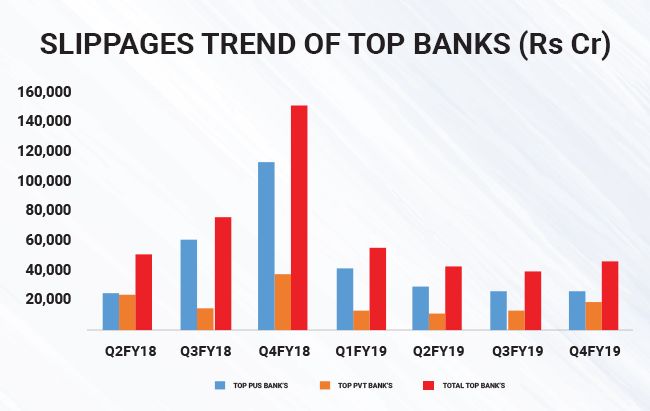 Indian banking sector (listed entities) have reported losses for five quarters out of last six quarters. Q4FY19 loss is the highest in last four quarters. The banking sector has reported a net loss of Rs 30,827 crore vs Rs 40,476 crore YOY for FY19. Pvt banks have reported a profit of Rs 43,014 crore vs Rs 41,828 crore, up 2.8 percent YOY in FY19 while PSU banks’ net loss for FY19 has declined to Rs 73,841 crore vs Rs 82,304 crore, down 10.3 percent YOY. PSU banks have reported their second highest quarterly loss in Q4FY19 (remember that we don’t have numbers for Dena and Vijaya Bank who have advances of around Rs 1.85-1.9 lakh crore together).

PSU banks continue with their net loss momentum for 9 quarters in a row while private banks reported lowest profit in last three quarters. The overall banking sector saw a decline of 4.7 percent QOQ in its GNPA to Rs 9.01 lakh crore vs Rs 9.5 lakh crore in Q3FY19. Gross NPA ratio was at 9.93 percent vs 10.86 percent QOQ.

PSU banks have reported a net loss of Rs 30,905 crore vs Rs 11,563 crore, up 167.3 percent QOQ. They have reported net losses for 12 quarters out of the last 15 quarters totalling to Rs2,01,0853 crore. Their share in incremental formation of bad loans or slippages have been coming down and provisions are elevated due to ageing of NPAs. Five PSU banks have come out of prompt corrective action framework -- Bank of India, Oriental Bank of Commerce, Allahabad Bank, Corporation Bank and Bank of Maharashtra. There is a sixth bank, Dena Bank, which has come out of PCA on account of merger with Bank of Baroda. PSU banks continue to lose their market share to private banks. PSU banks have lost mkt share of >900bps or >9 percent in last 14 quarters.

The GNPA in absolute value for PSU banks has decreased to Rs 7.68 lakh crore in Q4FY19 vs Rs 8.12 lakh core in Q3FY19, down 5.5 percent QOQ. They have been more prudent in improving their provision coverage ratio. The core provision coverage ratio (i.e. provision coverage ratio without technical write-off) has improved for PSU banks from 41.3 percent in Q3FY16 to 62 percent in Q4FY19. Treasury gains also helped lower the net loss for PSU banks and you can expect cushion from treasury business in Q1FY20 too due to lower yields. PSU bankers have said that they expect further recovery from NCLT List accounts in FY20. The profitability of PSU banks was also hit on account of higher provisions for ageing of NPAs and some of them improving their net NPA ratio. One of the best thing to happen in this quarter despite all the bad results, residual stress in the balance sheet is in single digits (as percentage of the loan book). This is perhaps the lowest ever residual stress in the balance sheet of PSU banks over the last 3-5 years. Five PSU banks have been moved out of PCA framework while Dena Bank has come out automatically due to merger with BOB.

We now have five PSU banks under PCA.

The parameters that invite prompt corrective action from the RBI are:

Net NPAs more than 6 percent but less than 9 percent

Net NPAs over 10 percent but less than 15 percent

Net NPAs 15 percent and above.

Negative return on assets for 2 years

Negative Return on assets for 3 years

Negative Return on assets for 4 years

Tier I leverage ratio of more than 25x

Tier I leverage ratio of more than 28.6x

Once PCA is triggered, the bank faces restrictions on expenses such as opening branches, recruiting staff and giving increments to employees. Further, the bank can disburse loans only to those companies whose borrowing is above investment grades.

They will also not be able to pick up capital from the market but mostly from the government and PSU agencies  such as LIC.

The net profit for private banks was at Rs 10,375 crore, up 36.4 percent YOY and down 13.3 percent QOQ. The quarterly profits of the private banks is on the lower side in last three quarters. The worrying factor amongst private banks was that they saw an increase in slippages for second quarter in a row by market leaders. GNPA was largely stable at Rs1.33 lakh crore, down 0.4 percent QOQ. The good part is that they continue to gain market share for 14th quarter in a row on the back of strong loan growth, which has also enabled them to make higher provisions and thereby, improving their net NPA. Loan growth was at 4.6 percent QOQ, which led to better income for private banks. Net NPA of private banks was at Rs 51789 crore, down 0.6 percent QOQ. Some of the positive surprise in private bank results came from the likes of ICICI Bank, Axis Bank, Federal Bank and Ujjivan SFB. Negative surprise came in from YES Bank (worst ever quarter), IndusInd Bank and IDFC First Bank. 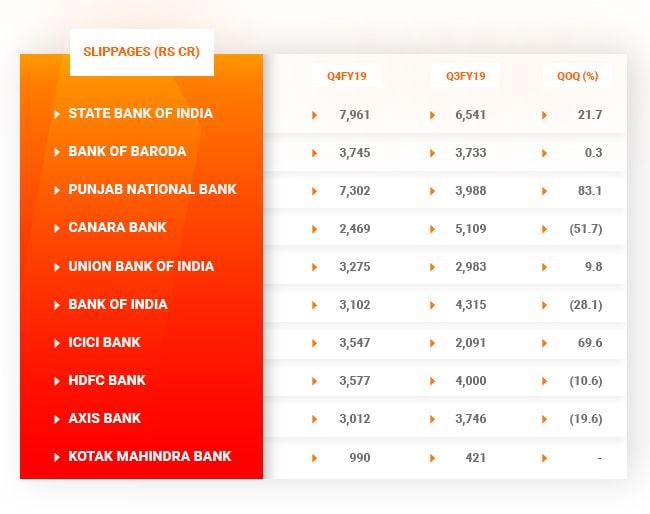