“Look, a temple!” Mani, who drives me from the picturesque Thiruvanthapuram airport down to Melattingal had been gleefully pointing out to the temples and churches along the route, and there are more than I care to remember.

Melattingal is a picturesque little town, embedded deep within the innards of Thiruvanthapuram district, surrounded by more villages and more temples. So, what does it have to do with luxury? Over the past year, I have been on a trail to discover luxury, not in our cities, but the hinterlands, in traditions that have been upended for the future, in the work of entrepreneurs and artisans who, in their quiet way, have rediscovered India’s centuries-old luxury offerings, but in contemporary ways.

This exploration has taken me across the length of Kerala over the past few months. The agenda: To explore the luxury end of Ayurveda and how heritage is being retrofitted for modern times (more of that later). Ernst & Young estimates that the Indian wellness industry will be worth Rs 1.5 lakh crore in 2019/20; 2 per cent of this (about Rs 3,000 crore) is the rejuvenation segment.

Wellness is to the 21st century what flower power was to the 60s and 70s. Beyond the cold statistics, an interesting development has been unfolding: The emergence of luxury Ayurveda centres/spas.

The new-age Ayurveda healing centres are still angsty about calling themselves ‘spas’; instead, they label themselves as Ayurveda resorts or retreats or even a village.

Ayurveda, among the world’s ancient healing systems, has been spoken about for several reasons – from the impact of its treatments to the austerity of its centres, which have traditionally eschewed the razzmatazz one associates with modern spas. Centres such as Kottakkal Arya Vaidyasala are set in lush surroundings, but function as hospitals.

Kerala is witnessing the emergence of a new segment of luxury Ayurveda retreats and healing centres that are sticklers for traditions, but do everything possible to appeal to an entirely new generation of luxury travellers, many of them inbound tourists from Europe or the US, besides a set of elite Indians.

Mekosha Ayurveda Spasuites defines this fast-emerging segment better than many others. It is dedicated to Ayurveda’s esoteric set of ideas, therapies and treatments, and yet is a modern spa with all the amenities except one. Unlike a hotel, you follow a schedule and you eat what Chef Anoop Appukuttan and Dr Maneesh, the resident doctor, draw up as set menu for the day (or a customised menu for a guest, depending on the plan they are on). 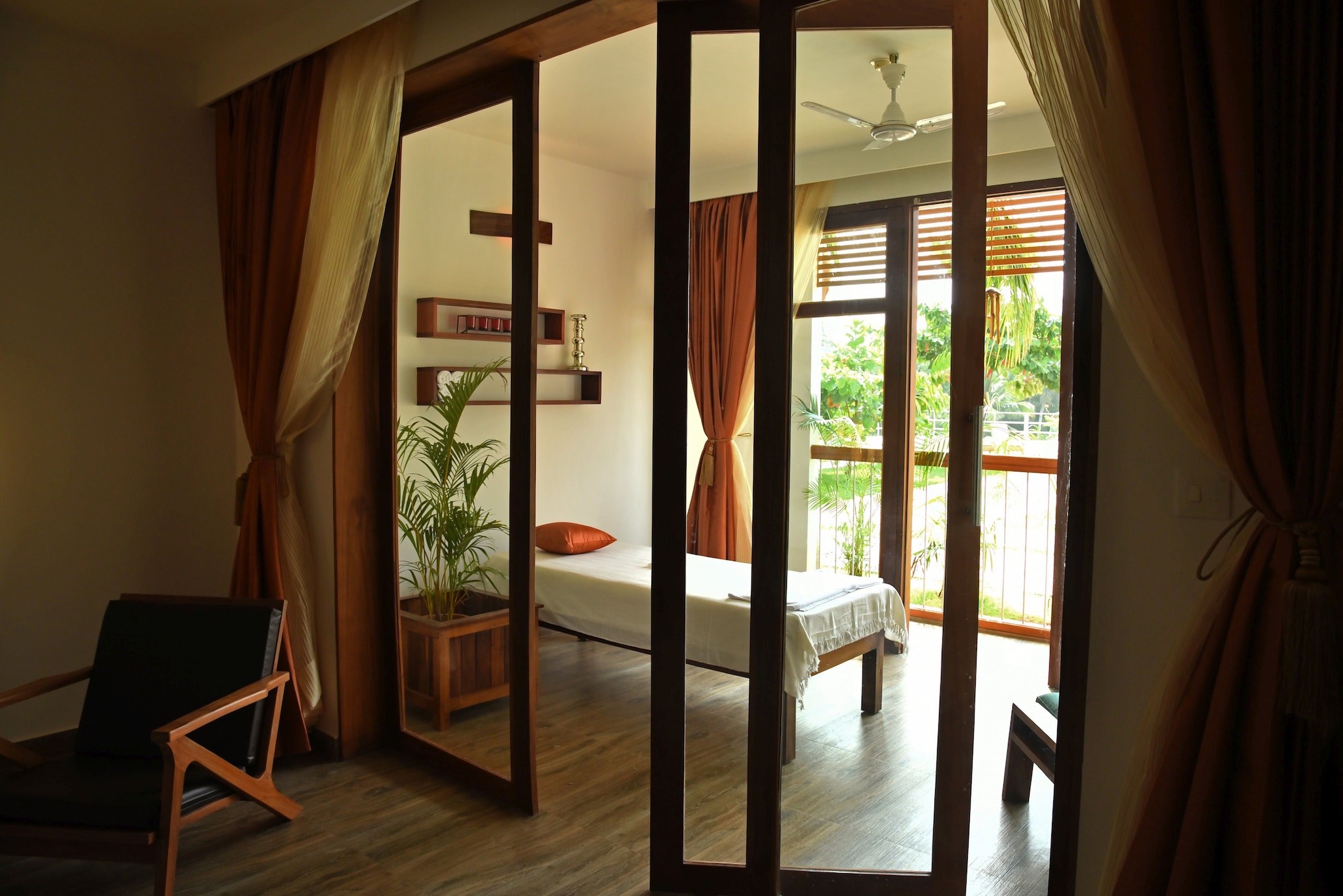 Set on the beautiful banks of the Attingal Aaru River with views of eagles sweeping down to claim their fish, and redolent with passion fruit, fig trees and a butterfly garden, Mekosha is everything bespoke. Including the treatments that Dr Maneesh, a quiet man at most times, draws up after a long conversation about your ailments, lifestyle, quirks and your body issues. I was recommended Marma, a therapy that involves massages and application of warm herbal concoctions, for my persistent knee pain.

There are just a handful of Marma practitioners and one of them is Dr Uni, who tells me, “The human body has 107 Marma points or pressure centres that are said to be a getaway to the seven chakras, which control the flow of energy. The 108th Marma point is to the soul.” Like a good Marma doctor, every morning, he places a little balm on the 108th point to invoke the prana inside me. 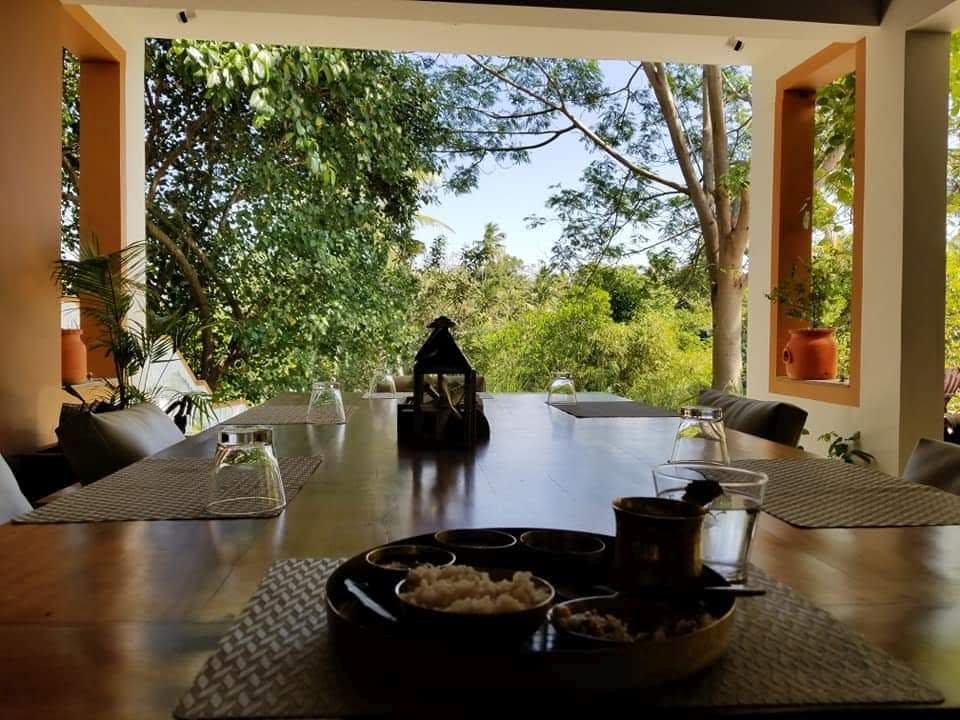 This column, however, is not about Marma (though I must mention that the pain has disappeared). It is about how spas such as Mekosha are changing the way we experience Ayurveda. Elizabeth Joseph, its loquacious general manager tells me that they don’t call the rooms, well, rooms. They call them homes. “It is designed like a beautiful home,” which it is if one goes by the informality of the space. But what Mekosha also offers are spasuites. You don’t have to step out to get to the spa room for the massages (unless you are taking one of those exfoliating baths or shirodhara). The masseur comes to your room, which has an attached private spa suite, where therapies and massages are administered. After the treatment, you can sit around and let the copious amount of oil and the herbs used for marma to soak right in.

The days of ‘smelly’ Ayurveda are over. While the therapies and treatments are authentic, the experience is boutique and customised. As the founder, Ram Wasan says, “Unlike other Ayurveda spas, we do not slot a massage at some unearthly morning. Our guests are often stressed out from vagaries of urban living and need to catch up on their sleep. We have built an ambience that blends the best of both worlds — the wisdom of ancient medicine and the comfort of a modern facility. The aim is to offer transformational vacations. While the approach is clinical, the ambiance and the setting are relaxed and easy.”

The serene location and the river perch where I spent evenings reading, play a vital role in the process of healing. Often, guests end up sitting on the community table, sharing life stories and experiences. “It is my personal belief that water has a calming effect on your body, so I knew this was the spot for Mekosha. The suites and the restaurant are all angled towards the water. The retreat itself is a minimal, modernistic building with straight clean lines, the beige and cream of the wood contrasting with the lush greenery outside.” The ingredients used to cook the food come from the grounds itself or the towns close-by. Mekosha, which will see several more iterations soon, one even in Rajasthan, does not resemble a hotel: there is no large lobby or reception desk, and each in the team of 11 has an idiosyncratic personality and very strong views.

A stay here is also an opportunity to explore the countryside – hop over to the jetty one morning to watch the fishing boats sail in or out, head to Varkala beach for a spot of evening spent on its golden sands or walking down the cliff that fringes it, and if Joseph and Dr Uni are up to it, go looking for an isolated stretch of the backwaters.

At the other end of the spectrum is the sprawling Kairali – The Ayurvedic Healing Village stretched across 50 acres. This one resembles a true-blue design-oriented resort, with its differently coloured and shaped villas – in shades of earth and green/blue/yellow, in shapes such as oval and rectangular, designed as per vaastu traditions and shrouded by the thick foliage of native trees. Each villa houses the rare valambari conch, which is said to engender positive vibrations in the body. Extensive use of red oxide in the flooring and laterite stones ensure that the villas stay cool even when the temperatures outside are rising. My villa has everything a creature of comfort might need — air-conditioning, a television and room service. But the water in the thermos is pink and infused with herbs (Pattanga and Gokshura) to promote wellness, the welcome basket is freshly cut fruit from the organic garden, the rubber slippers promise to slip in an acupuncture session and I brush my teeth with a powder made of arimedastwak (for healthy gums), yashti (which has anti-bacterial properties) and ela (prevents bad breath).

A charming stream cuts through the rambling grounds and a river flows nearby. The village is set to the captivating backdrop of the Western Ghats in Palakkad. A few villas home the spa where therapists, based on the diagnosis of a host of doctors, employ authentic methods of massages, exfoliation and baths to set right your doshas. Food plays a crucial role, with chefs ensuring adherence to a diet. Here, my knees and joints get the kadikizhi treatment, a massage with herbs used to alleviate joint and muscle pain. The owners, KV Ramesh and Gita Ramesh, hail from a family of traditional Ayurveda practitioners and doctors, inheriting it as part of their genetic makeup. 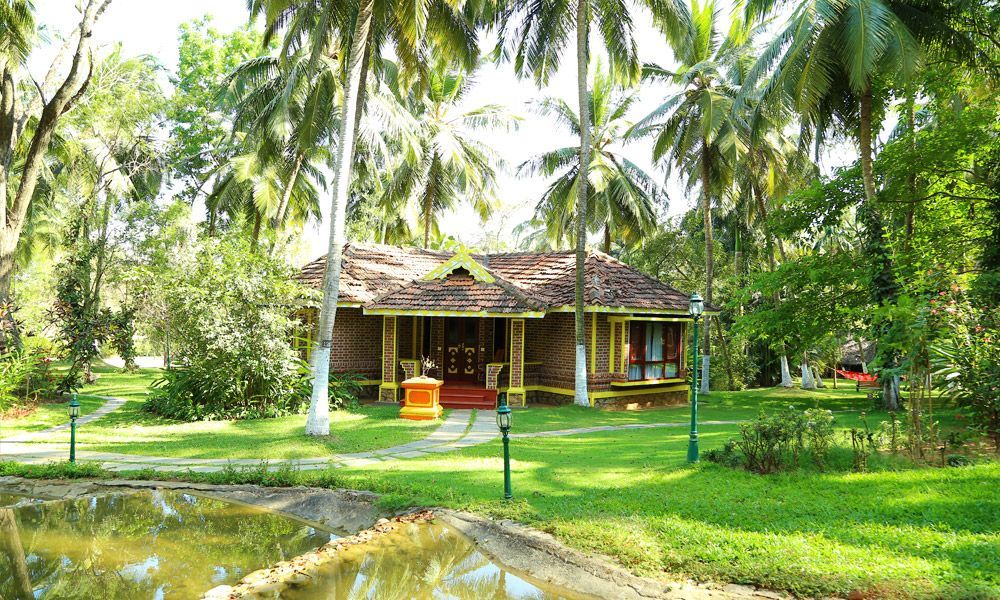 Kairali is more of a sprawling empire with treatment centres in 35 locations, including eight outside India, the healing village that hosts guests at the Palakkad resort, and a line of medical and cosmetic products that are retailed from the retreat and online.

There are several other retreats with Ayurveda firmly at their core. Somatheeram Ayurveda Resort on a hillock south of the Kovalam beach encourages a culture of Ayurvedic holidays and meditation tours. Perched on a sharp cliff above a secluded beach on the Kovalam coast itself is the superlative Niraamaya Retreats Surya Samudra, which bills itself as a wellness retreat offering a host of Ayurveda-based therapies, yoga, sound meditation and mindfulness sessions.

Svatma in Thanjavur is an experiential boutique hotel that provides a wellness experience using vibrant sound therapy, based on the transcending technique of healing through music. This stretch of once-Chola land was renowned for its exploration of art, music and architecture, and is credited with the creation of the Thanjavur Veena, an ancient stringed instrument known to produce mellifluous music. A growing number of retreats in the region are structuring long-stay programmes for the rising number of guests who desire access to Ayurveda, without losing out on creature comforts.