Assembly election results 2021: Beyond West Bengal and the defeat for the BJP

Assembly election results 2021: Beyond West Bengal and the defeat for the BJP 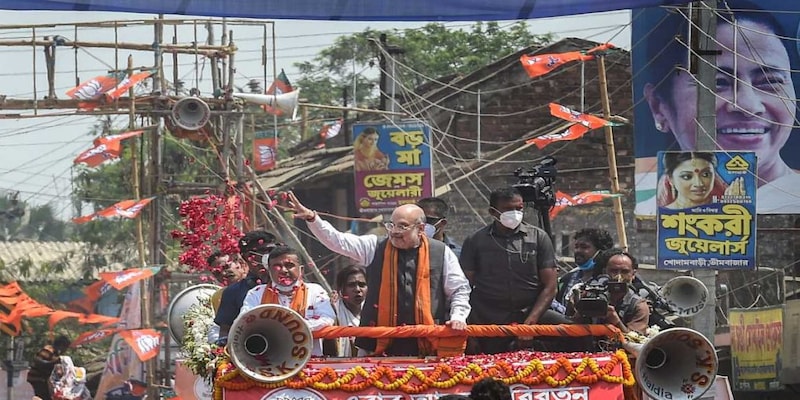 The BJP should humbly accept the verdict and focus on building its base in West Bengal for future elections.

So the wait is over, and the results of the assembly elections are here to analyse. However, the debate on the West Bengal verdict has overshadowed the mandate in the four other states and union territory. Interestingly, there are several takeaways to highlight from the election results. Because not only the TMC in West Bengal but the NDA in Assam and the LDF in Kerala have also returned to power, and the contests in these states were no less fierce.

Perhaps the debates are centred around the decision of West Bengal because the BJP failed to achieve its much-publicised 'Mission 200+' in the state. And the mandate is being evaluated as an embarrassing defeat of the saffron party since it left nothing to chance in its attempt to dislodge the TMC regime. Ironically, the campaign was equally bitter in Assam, where the BJP alliance is retaining power, but probably that does not merit the recognition of the critics.
Nonetheless, before discussing the West Bengal results and the electoral message for the BJP, let's examine the decision of the other states beginning with Kerala, where the ruling Left Democratic Front broke the 40-year long jinx. CPM stalwart and incumbent Chief Minister Pinarayi Vijayan scripted history by returning to power as Kerala has been voting alternatively for the LDF and the UDF in the past four decades.
While Pinarayi Vijayan won the confidence of the people by handling the Covid pandemic and the 2018 Kerala floods appropriately, the election mandate is indeed a loss of face for the Congress, which probably relied on the voting pattern to take turns to power. The blow is harder for Rahul Gandhi, who extensively campaigned for the party in Kerala - and Assam - hoping that the double victory would make his reascension to the Congress president post easy. Now the plan could be deferred, maybe till the assembly elections next year.
The Assam results are even more worrying for Congress because the party believed that an alliance with the AIUDF would help it consolidate all anti-BJP votes in the state. Both Rahul and Priyanka Gandhi vociferously raised the CAA issue to woo the Muslims and the Bengali speaking Hindus. They widely canvassed the state reaching out to all sections of voters but failed to stop the BJP-led government from being reelected.
In Tamil Nadu, more than the anti-incumbency factor, the AIADMK seems to have paid the price of being a divided house with multiple faces around, while the DMK promised a single-handed rule in the state. Even though the BJP is presumed to be controlling the AIADMK government, the party never held any significance for the voters in Tamil Nadu. So there was almost nothing at stake for the saffron party to lose here.
In Union Territory Puducherry, however, the BJP has made inroads in this election, winning several seats, while the NDA alliance is set to form the government. Clearly, the people gave an edge to the NDA despite the outcry of the Congress, which blamed the BJP for the fall of the Narayanasamy government.
Coming back to West Bengal, one should not lose sight of the pattern in which the state has always voted. From the Congress regime to the Left government to the TMC rule in West Bengal, the voters have never switched their loyalty in a single election. It has always been years of build-up before a party finally came to power. The TMC (post the split with the Congress in 1998) made it to the Writers' Building in its third attempt in 2011.
The BJP, with just over 10 percent vote share in the 2016 assembly elections, managed to win only three seats in West Bengal. The crucial gain was witnessed in the 2019 general elections when its vote share jumped to 40.7%, and the saffron party bagged 16 Lok Sabha seats. This time around, the BJP had generated huge anticipations with its high-voltage, aggressive campaigning. But, if West Bengal's electoral history is any yardstick, only a miracle would have projected the BJP to the seat of power in its first serious attempt.
In truth, what the BJP has gained in this election has come from the loss of the Sanjukta Morcha. Mamata Banerjee's TMC has not only survived but also emerged stronger in West Bengal. The victory is exceptional because she fought it all on her own, despite hordes of her former aides quitting the TMC. However, this is also a fact that now she will have to face a stronger BJP in the state assembly.
Undoubtedly, the Modi factor couldn't make a big difference in West Bengal, but it certainly played its role in the BJP's growth. And it also can't be denied that the electorate may have exercised their franchise intelligently, choosing Mamata Banerjee for the Chief Minister's post, and when it came to the next Lok Sabha elections, they may send even more BJP MPs from the state to support Narendra Modi for PM in 2024.
The BJP must understand that ridiculing Didi in the rallies did no good to the party, nor it behoved anyone to do it. The mockery certainly galvanised the votes of women and TMC sympathisers in Mamata Banerjee's favour. The BJP must learn from this mistake and not repeat it.
The BJP should humbly accept the verdict and focus on building its base in West Bengal for future elections. Despite provocations, the BJP leaders must not engage in rancorous verbal wars with the critics over the Bengal results. They should also be mindful that the party still has the mandate to lead the nation till 2024. And it should make the most of it trying to take the country forward. No matter what, the BJP leadership's current priority should be to pull India out of the Covid crisis.
—Om Tiwari is a Delhi-based journalist and columnist. The views expressed are personal
Click to read his other columns
(Edited by : Ajay Vaishnav)
Check out our in-depth Market Coverage, Business News & get real-time Stock Market Updates on CNBC-TV18. Also, Watch our channels CNBC-TV18, CNBC Awaaz and CNBC Bajar Live on-the-go!