After nine years, Bose Krishnamachari returns with a solo show that digs deep into the heart of darkness in India

Updated : February 13, 2020 02:58 PM IST
‘The Mirror Sees Best in the Dark’ has nine big projects with 90 assemblages that spark a discourse on India’s descent into chaos and anarchy.
Bose juxtaposes concepts of minimalism and maximalism, drawn from his life and from India.
The contemporary Emami Art gallery, the venue of the exhibition, offers museum-worthy large spaces.

These numbers gain significance in Bose Krishnamachari’s new body of work. The artist and co-founder of Kochi-Muziris Biennale is exhibiting his first solo show in 9 years at Emami Art within Kolkata Centre for Creativity (KCC). The intermediary years have been spent on building and nurturing the world’s first artist-led and India’s only art biennale, the success of which is obvious to not just those in the world of art. It is a biennale that attracts large sections of the public to participate and engage with the art in various interesting ways.

Nine projects, with over 90 assemblages, then, make up ‘The Mirror Sees Best in the Dark’. Bose employs contrasting worlds of minimalism and maximalism to question and comment on the dark times we live in and the extreme discourses that have become part of our consciousness, our private and public lives. “At the core of the works are 10 words that have come to define our consciousness,” says Krishnamachari. “Words like nationalism, capitalism God, regionalism, racism, chauvinism, narcissism, and such, all connected to the present global situation in general, and the Indian context in particular,” he says. Large-scale art projects spread across the huge contemporary art gallery Emami Art interpret and represent these words in different ways. Krishnamachari has used a host of interesting materials such as granite and mirror to reflect his concerns and make a statement about our present time. As culture theorist and curator Ranjit Hoskote says about his art: “How fast can sound travel through graphite, copper, steel, or stone? Very fast, and with considerable resonance, in the hands of an ingenious, versatile and socially engaged artist like Bose Krishnamachari, who relays through his work a powerful commitment to effecting transformation in the political and cultural contexts of the historical moment.”

Krishnamachari on the nine projects that form the nucleus of his new show.

At the core of the idea: Is the rapid rise of regionalism, religion disharmony and nationalism, which marks our times and the rise of religious chauvinism. “You need to keep some distance from religion. If you are addicted or dictated by it, the situation becomes dangerous, as is obvious. Everyone talks about how Hitler and Nazis killed five million Jews. But the world has seen the rise of several dictators responsible for mass murder, like the Congo genocide. Everyone is nervous about our times. Through my art, I am pointing out the need for sensitivity to problems created by religion and nationalism.” The artworks meld various materials and art forms, architecture and art, creating a sort of visual theatre in the beautiful gallery. The ‘museum-like’ venue: “I conceptualised the scale of the art with the gallery in mind. You don’t have big galleries in India that allow you to do large-scale artworks, works that could fit in a museum. In 2016, art consultant Anupa Mehta took me to see Emami Art and introduce me to Richa (Agarwal, CEO Emami Art). The gallery was still under construction and was it was meant to open with my show two years later. Unfortunately, that could not happen. It is an exciting space to show in and perfect for my current exhibition. The art spreads over 9,000sq.ft.” The gallery is located within KCC which is spread across a rather large 70,000sq.ft of space which has 14ft tall ceilings. It is headlined by Agarwal, who, along with her husband Aditya Agarwal, the director of Emami Group of Companies, is a passionate art collector. They have put together an enviable collection for the Emami corporate office. In one of his art projects, ‘10 Commandments in Silence’, Krishnamachari has used Braille, considered a language of minimalism. “I was doing theatre from the age of 17 to 21, which is when I encountered absurd theatre. I bring that idea of absurd, and abstract quality, to my art. So, while some art like is minimal, others such as ‘The 9 Rasas and One Soft Cut’, handcrafted in teakwood, print, metal and acrylic mirror, is maximal and ornate. Indians are ostentatious by nature. Beauty is synonymous with ornamentation for us, a fact visible in gilded frames. A material as maximal as gold is used for ornamenting our own selves and our art, as is visible in Tanjore paintings.” 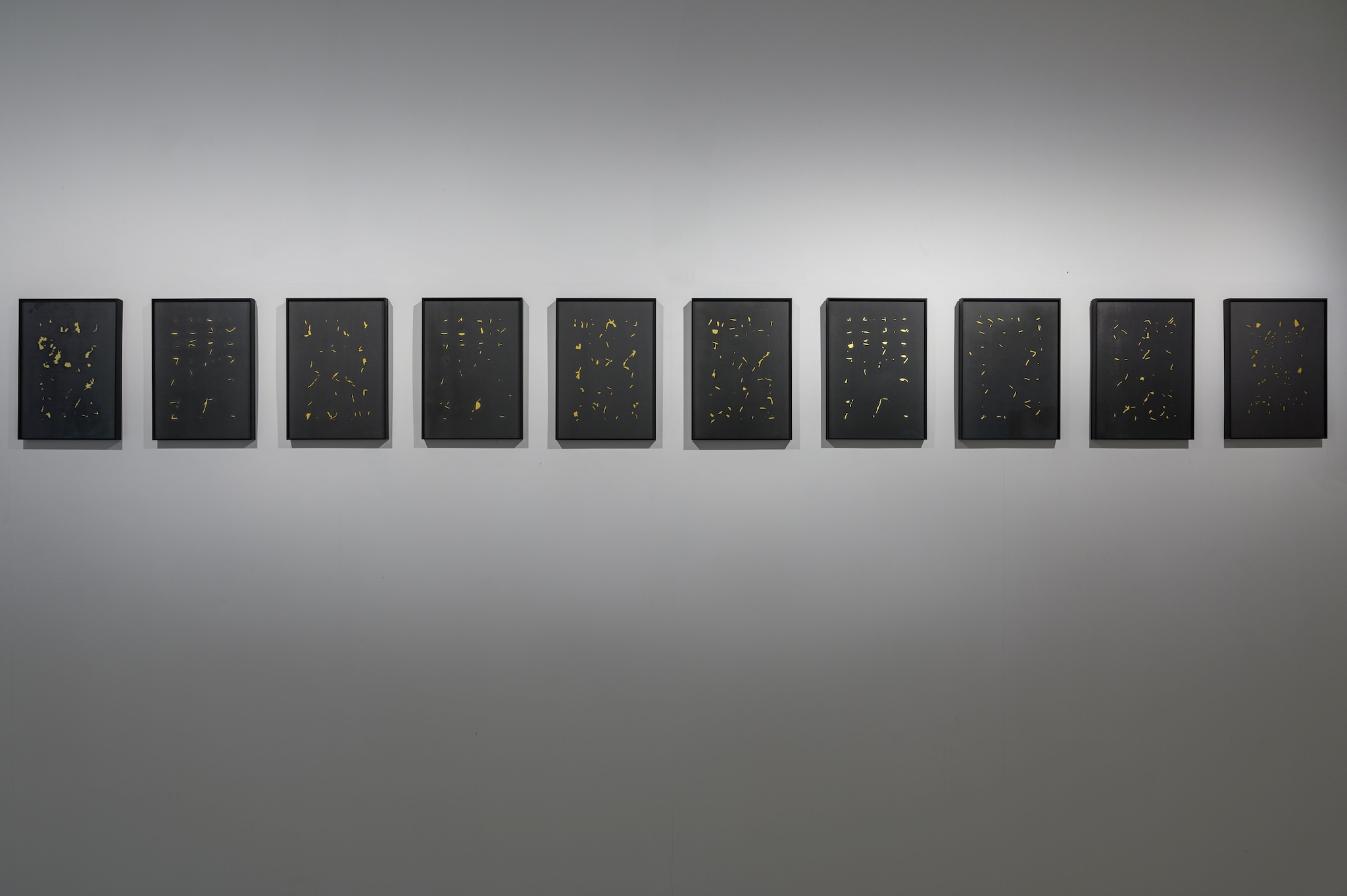 At the maximal end of his current art projects is a work that draws its name from the title of the exhibition. For the titular project ‘Mirror Sees Best in the Dark’, he has used nine coloured acrylic glass panels, within which is placed the Aranmula mirror.

The artwork ‘Sanctum Sanctorum’, made using teakwood and Aranmula Kannadi (or Aranmula mirror, a handmade metal-alloy mirror made in Aranmula, a small town in Pathanamthitta) and non-reflective glass, he has created a temporary room in 120x90ft dimensions that hold nine frames of variable sizes, depending on the size of the text on each. “Each work has four or five layers; the first is gilded, decorated frames, next come toughened glass, then digitally-cut thin mirrors pasted on acrylic sheet. Behind the acrylic sheets, there is a golden mirror,” he says.

The material palette: An art-meets-architecture project like this is also focussed on the material palette used. Bose has deployed a wide-ranging material palette to explore the heart of darkness in contemporary society, from stone to paper, graphite, ceramic made in Baroda, wood, MDF, Painted MDF, glass, and, of course, mirror. “The idea is the molecule and you expand it by using the right materials. I am fascinated by the work done by the Indian craftsmen and I have used Kerala artisans to carve teakwood.” Not just carved teakwood, even the Aranmula mirrors in his centrepiece work are considered a traditional metallurgical feat. They are produced by excessive polishing of the dark metal surface for several days straight, till they become bright enough to reflect. Nine carved wooden frames with Aranmula Mirrors embedded in coloured acrylic glass, jutting out of the wall, informs this work. “Mirror is among the darkest surfaces and is the best material I could deploy to represent a concept such as narcissism, an idea that captures the idea of an all-powerful ruler, a sort of dictator.” Elsewhere in the exhibition is his ingenious use of completely contrasting material to the delicate mirror; two sculptures in a tough material like granite. The art project ‘-2019 +’ is chiselled out of found stone, created to be an artefact of posterity. Here, Krishnamachari is inspired by Marcel Duchamp, the French-American artist credited for inventing the ‘readymade’ or the idea of taking something preexisting and elevating it into art. “I also found inspiration from the Chhatrapati Shivaji Maharaj Vastu Sangrahalaya (the Prince of Wales Museum) in Mumbai, which has objects with indecipherable typography on them. “Maybe after 5,000 years, my work will reflect our times for the future generations, when it is excavated,” he smiles.