A magnificent Souza is discovered after five decades in the US

Updated : September 24, 2018 11:55 AM IST
Crucifixon, a 1963 painting by FN Souza, will be on public display after 54 years.
At the Hindu Temple Society in Flushing, Queens – the oldest Hindu temple in New York –Indian-Americans gathered for the nine-day celebration of Ganesh Chathurthi.

A magnificent Souza work is enjoying a renaissance after 54 years. It is a momentous time for all the art lovers gathered at the ground-breaking new exhibition The Progressive Revolution: Modern Art for a New India, which shows the work of the Progressive Artists’ Group as never before seen. For several years, this 1963 painting, which is the largest Crucifixion that Souza ever made, was kept rolled up in a studio.

f the Asia Society said, “It was last seen at his first solo exhibition, The Human and the Divine Predicament, at London’s Grosvenor Gallery in 1964, before disappearing into a private collection — its whereabouts disputed for years. This is the first time it has been publicly displayed in 54 years.” The exhibition, which brings together 80 works of art from the Progressive Artists, many of them together for the first time, has many surprises for gallery visitors. There are intriguing stories behind the paintings and in fact, there is the much seen photograph of the Progressive artists together – and the two artworks on the wall in this iconic photograph are actually physically present in this exhibition.

So this is an exhibition to browse and mull over, and learn many unknown facts about India’s quintessential moderns, as works from private collections from India to America are displayed together here along with those from public museums, and you see their collective vision of a New India, a secular India. Jumabhoy points out, “As the Progressives visualised modern India as a heterogeneous entity, they set out to prove that they were both Indian and international – the definition of each term contingent on the other.”

Looking at the elaborate stone silhouette of the temple, the rush of devotees and hearing the clang of drums, you could have been forgiven for thinking you were back in Chennai. But no, this was the Hindu Temple Society in Flushing, Queens – the oldest Hindu temple in New York set in a working-class neighborhood – and Indian-Americans had gathered for the nine-day celebration of Ganesh Chathurthi.

Spirituality is something most Indians bring with them in their flight to America and it was impressive to see CEOs, bankers, business people and techies abandon their suits for dhotis and kurtas on this special day as Ganesha’s chariot was taken in procession around Main Street. In fact, the many IT devotees ensured that the entire event was live-streamed. 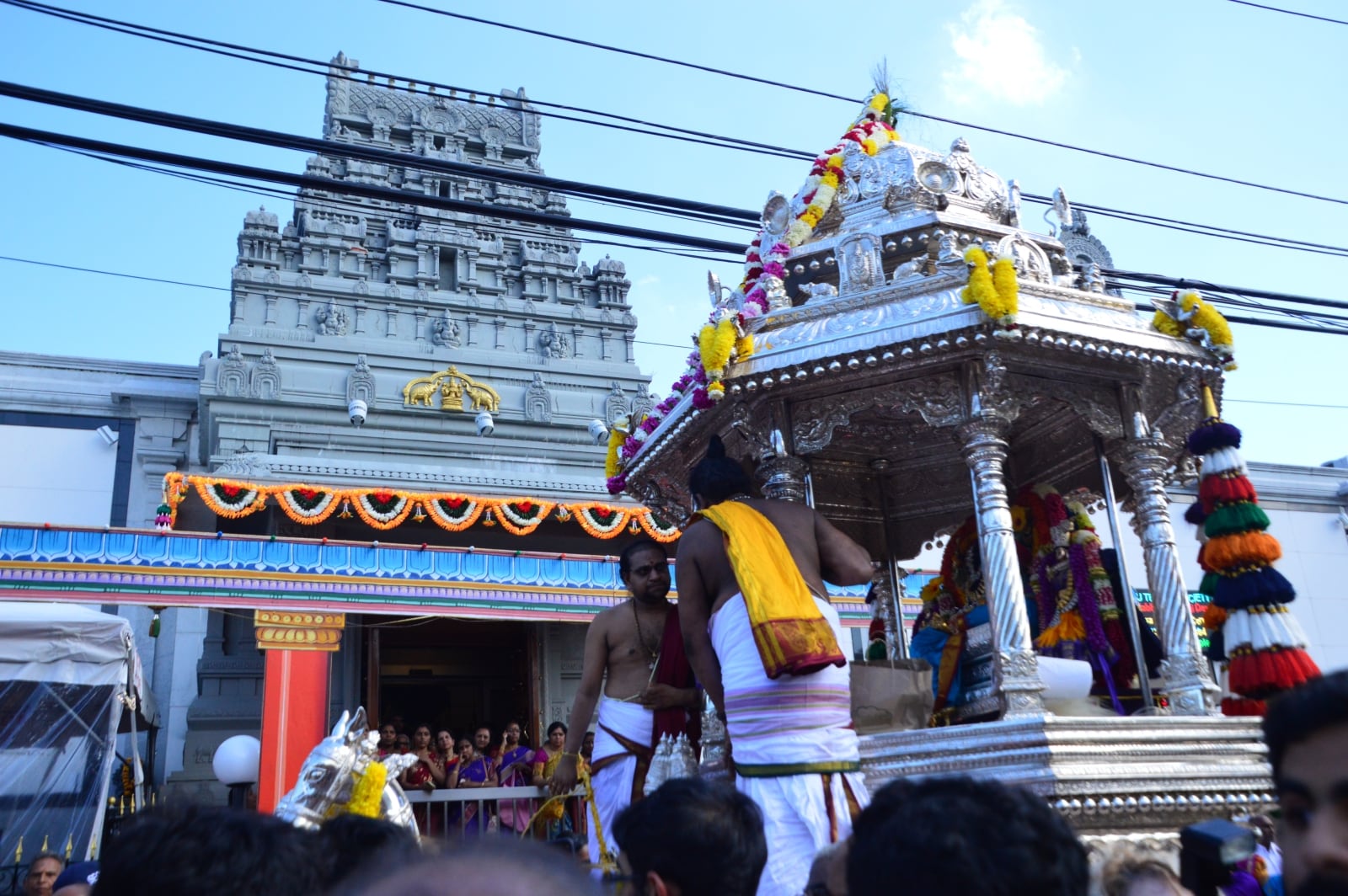 At the Hindu Temple Society in Flushing, Queens – the oldest Hindu temple in New York –Indian-Americans gathered for the nine-day celebration of Ganesh Chathurthi.

Ganesha has become quite a part of the neighborhood as people danced, drums clanged and store-owners gave out mango drinks and Glaxo biscuits to the crowds. The temple had close to 10,000 visitors and over the nine days 60,000 lunch platters were given out from giant pots of daal and rice and about 10,000 laddoos.

As Dr Mysorekar, president of the temple, said, “It’s a very unique procession – diverse people come together because Ganesha is a symbol of a Universal God. Whether it’s a learning process or curiosity but it brings different people in.”

Indians in America have stayed with their belief and their faith. “It is something we should all be very proud of,” agrees Mysorekar.  “We are Americans and at the same time we have kept our Hindu traditions and we continue to follow our religion while believing strongly in interfaith. As Indians we reach out to everybody.” The Hindu temple has fit right into this American neighborhood, is active on the civic boards and in fact, is so well-loved in the local community that Lord Ganesha was given VIP treatment with his chariot being led by a New York police patrol car.

India On The Move

Amitabh Kant, CEO of government think-tank NITI Aayog, was in New York and enthralled audiences at the Asia Society with a futuristic view of India in 2050. What will the world's fastest-growing economy — the sixth-largest economy overall — look like in 2050? He informed Indian-Americans how India is going to be a world player in the years to come with its youthful population and its immense talent. “India is the only country with a billion biometrics, it’s the only country with a billion bank accounts and it’s the only country which is using technology to leapfrog,” 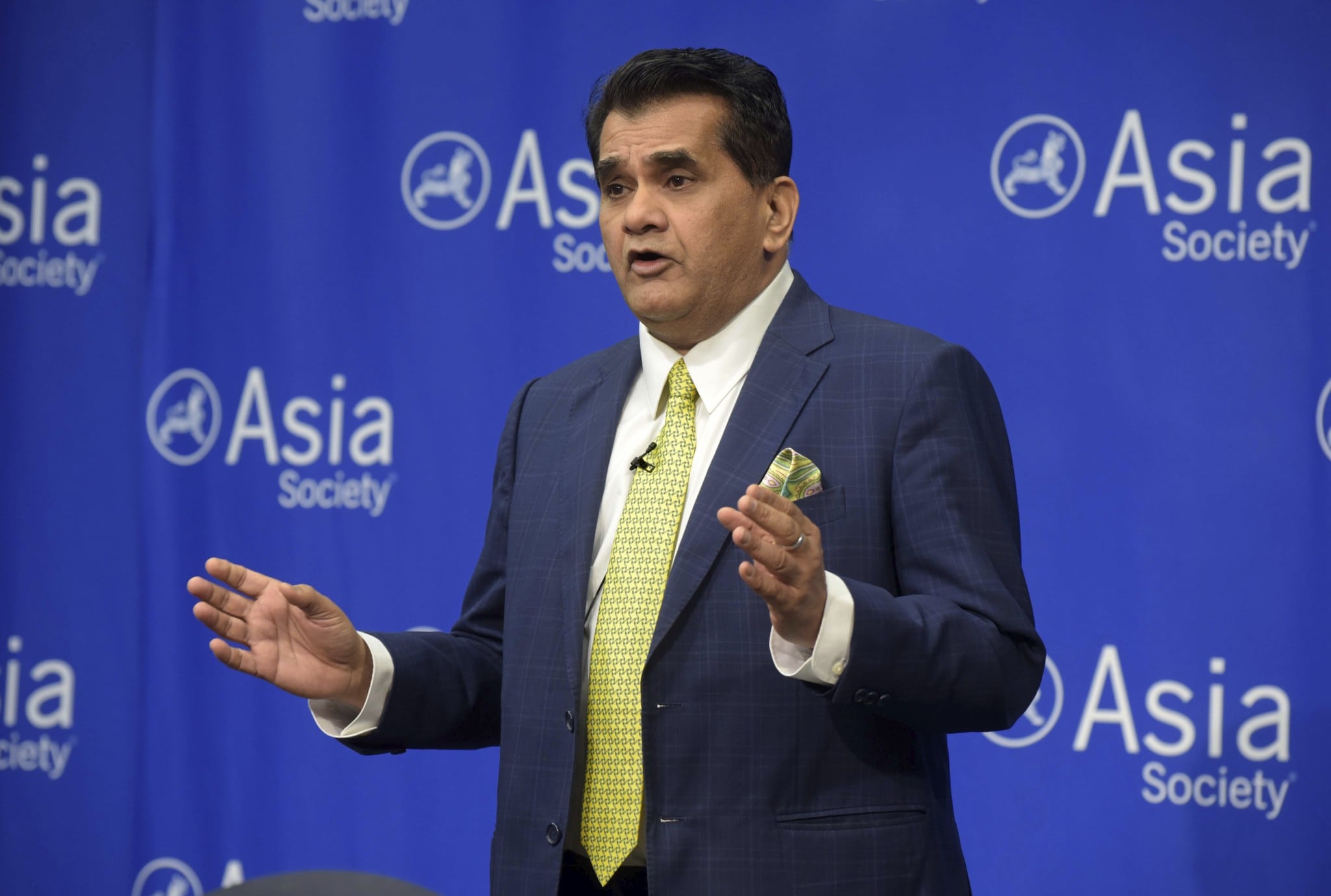 Kant discussed the challenges too. As he noted: “In the next five decades India will have over 700 million people getting urbanised. The process of urbanisation has ended in America but in India the process has just begun. The challenge for India is to really create two Americas – and do it in a far more innovative and sustainable manner, in a compact, dense manner, recycling water and waste. The challenge is how India does innovative and sustainable urbanization, and how it creates world-class infrastructure.”

His talk was followed by a panel discussion with some thought leaders – Asia Society vice- president Tom Nagorski, Vinita Jain, the founder and chairman of Biotique, Charles R. Kaye, co-CEO of private equity firm Warburg Pincus, and Arun M Kumar, Chairman and CEO of KPMG India. The discussion was moderated by journalist and editor Bobby Ghosh.

The large audience also chimed in with timely questions which showed the strong interest in India’s future. The entire event was livestreamed so you can have a front row seat to the entire event that the luncheon guests got to see. Well, maybe you don’t get to taste the Asia Society lunch!

The Season of India Gala Glitters

The Progressives have brought a lot of art lovers, dealers and curators to New York for this show and it was a total love fest at the opening Season of India Gala which was co-chaired by Sangita Jindal and Sana H Sabbagh at the elegant Pierre on Fifth Avenue. Well-known names from the worlds of business, art, scholarship and philanthropy had all come together to support the arts and celebrate the new exhibition of some of India’s most important art.

In fact this kicks off the Season of India with different events running all the way to January 2019. (The exhibition, along with many thought-provoking panels, can be seen from September 14, 2018 through January 20, 2019.) India has indeed come to America!

Have you signed up for Primo, our daily newsletter? It has all the stories and data on the market, business, economy and tech that you need to know.
Tags Amitabh Kant Ganesh Chathurthi Ganesh Chathurthi in US Grosvenor Gallery India in America Lavina Melwani Niti Aayog Progressive Artists Views