A legacy of flavors from Floyd Cardoz – a year later, his presence lingers

It was in March of last year that New York lost the much-loved chef Floyd Cardoz – he was one of the first people that the Indian-American community lost and he was one who was engaged in so many different worlds. COVID-19 is that brutal force that allows no goodbyes, no final farewells. Millions of families across the world have faced it, and in each case, the parting is traumatic, with each person battling a very private nightmare. Barkha Cardoz, wife, mother and daughter, could not have imagined this ending to her fairy-tale love story with noted chef Floyd Cardoz. They were the toast of the culinary world and their home in New Jersey was a place of love, camaraderie and many new beginnings. Until Floyd succumbed to this horrific new virus – the novel coronavirus – which was taking over the world.

It was in March of last year that New York lost the much-loved chef Floyd Cardoz – he was one of the first people that the Indian-American community lost and he was one who was engaged in so many different worlds. Chef and restaurateur, he had introduced the West to the nuances of Indian spices at the iconic Tabla, Paowalla, The Bread Bar and more. He brought joy to the simplest meal and was a great evangelist for Indian cuisine.

Chef Floyd Cardoz and his wife Barkha Cardoz
With COVID-19 a constant presence, life has gone on for most of us - muddled, stressed, just putting one foot in front of the other in this dreadful time of the pandemic.
For Barkha, Floyd’s wife, COVID-19 has never let up and the pain never subsides. The grief has escalated with the horrific COVID-19 catastrophe in India, especially in her hometown of Mumbai where Floyd’s mother, who is 90, lives. Barkha understands, from firsthand experience, the pain and turmoil of coronavirus and the way it has affected near and dear ones.
As is human nature, Floyd and she would often live in the future, making plans six months ahead, ten months down the road. She does not do that anymore. “I learned a big lesson last year that all you have is – now,” she says. “The only thing that you're sure of is the moment you're in. I don't even know if I'm going to see the evening. I have this past year seen a lot of pain and turmoil, but there’s also been a lot of emotional and mental growth, of realizing that you have to live in the moment.  Every morning I say to myself - You've been granted today and just do what's right and make a difference - and that's how I live.”
Barkha still feels the presence of Floyd when she cooks the foods he had shared with them, the spice-blends he had concocted especially for her to make cooking family dinners easier for her. The result has been a sharing with the larger world of food lovers in which Barkha has partnered with spice house Burlap & Barrel to make signature blends, Floyd Cardoz Masalas. These were conceived by Floyd back in 2019 and are now available to all, to share the passion and spice Floyd brought into his cooking.
The three fine spice-blends are Garam Masala, Kashmiri Masala and Goan Masala -  a project started by Floyd but brought to fruition by Barkha with the two co-founders of Burlap & Barrel, a public benefit corporation.  Each masala is created like a fine aria in its complex composition. The Kashmir Masala ingredients are Kashmiri chilli, coriander, ginger, fennel, cinnamon, turmeric, cinnamon leaf, black cardamom, yellow cardamom, mace, and cloves.
She recalled in a letter she wrote to Floyd: “I was so nervous to grind and blend those first 800 pounds of spices with Ethan and Ori, wanting to get things perfect for you. But I felt you with us—guiding my hand, nudging me to trust my years of experience and exposure to flavours...and it worked. When we were done, I felt confident and calm. I knew that, all together, we had created a flavour legacy.”
Floyd had always been known for his generous spirit, be it mentoring upcoming chefs or giving back to the community. When he won the top prize of $110,000 on Top Chef Masters, he donated it to start an education foundation - The Young Scientist Cancer Research Fund (YSCRF) at the Tisch Cancer Institute at the Mount Sinai School of Medicine. Floyd himself had been in biomedicine and wanted to give high school students the opportunity, irrespective of financial ability. He also received the James Beard Humanitarian of the Year Award for all that he did for others. 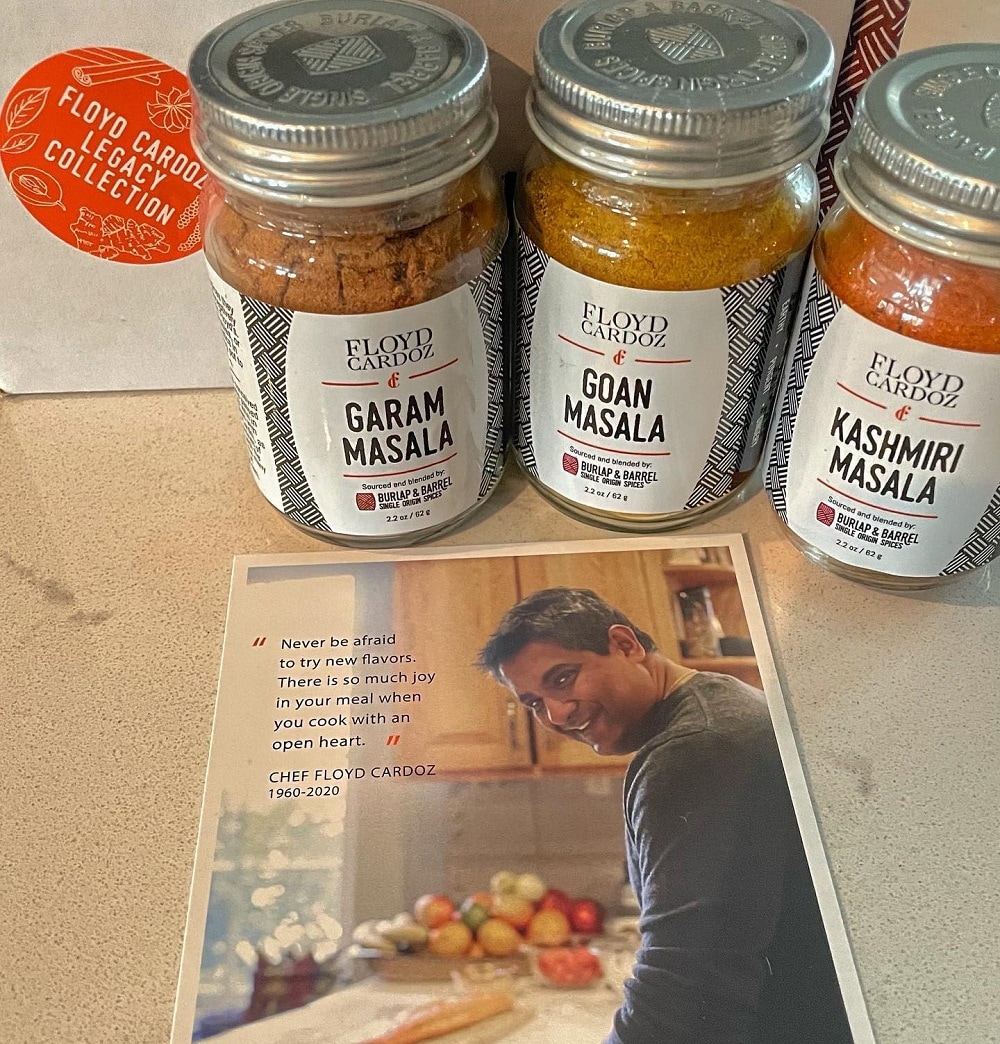 The Floyd Cardoz Legacy Masalas
So with the FC Masalas, it was a given that a portion from every jar would always go to a charity project. Says Barkha; “When we started doing the masalas we had been very clear that we had to pay it forward. We had to do something that would help us make a difference, however small it was.”
With Floyd Cardoz Legacy LLC,   Barkha is slowly edging back into life, keeping Floyd’s memory alive with legacy projects, including the Burlap and Barrel collaboration. She recalls, “Floyd used to help me learn, help me grow and made me a partner in whatever he was doing. So I feel like now it’s my turn to be doing that, with him guiding me and showing me the way.”
Barkha has slowly re-entered the culinary world, participating on talk shows and food networks, sharing Floyd’s memories and cuisine, and also interacting with groups of female chefs and emerging talents.
She was a batchmate with Floyd in hospitality school, so would she now consider showcasing her own talents as a chef?  She demurs: “I’ve had struggles with that so far because my biggest cheerleader was my husband. Yes, I cook for him every day but to say I’ll do that is hard – maybe in a couple of years, maybe in time I can. I do love teaching and it’s something I’ve done forever – I would love to teach people how to cook Indian food.”
Barkha has interacted with many of the chefs on social media and has started sharing Floyd’s recipes and her own, dipping her toes in the water. She says, “There are so many amazing people doing it right now and it is so beautiful to see it. I love to do it, hands-on, in-person, small groups, just for the fun of it, to let people see what a beautiful cuisine we have. I may do it in the future but I'm not ready yet, it's just hard for me.”
As she starts her solo journey, Barkha Cardoz knows that Floyd is the wind beneath her wings and the respect and support the food industry had for him is behind her.   She says, “You don't realize it is there till you need it and it shows up every day, Every day, somebody shows up in my corner with something; whether it’s a kind word, whether it's sending me a text message or phone call or something shows up on my doorstep or it's just that kindness and generosity of spirit and compassion. I know that when I'm ready there will be enough people to embrace and help me.”
In the meantime, as Barkha Cardoz adjusts to the new normal of life with her two sons Peter and Justin, she continues to receive messages from all those who were impacted by Floyd’s giving and caring nature. In these difficult times, she says the only way forward is kindness: “I just want people to be kind. I want everybody to remember Floyd and his kindness, his realness and humanity. If they can learn something from it, and make themselves better and make life better for everyone else that would be amazing. I won’t rest until everyone knows about Floyd and his love for spices and Indian food. ”
-Lavina Melwani is a New York-based journalist who blogs at Lassi with Lavina. Read her columns here.
(Edited by : Pradeep Suresh V)
Previous Article

Teachers' Day 2021: A look at Indian films that celebrate the teacher-student bond

From Haiti earthquake to New York floods: A look at how natural calamities are taking a toll on the planet in 2021