A diary of train travel during the 'Janata Curfew': More discipline, little joy and no cries of 'chai, chai'

Updated : March 25, 2020 06:26 AM IST
On March 22, between 7 am and 9 pm, India observed ‘Janata Curfew’, whose idea was mooted by Prime Minister Narendra Modi, to encourage the concept of social distancing and curb the spread of the deadly coronavirus.
From a platform ticket -- which one usually buys for Rs 10 -- costing Rs 50, to the way passengers treated each other, COVID-19 changed my train experience like never before.
While generally we Indians love to socialise on train journeys, this time, the air was clearly tense.

Considering India’s large middle-class and poor population, trains continue to remain the preferred mode of transport for many even today.

To be precise, Indian Railways, with a total network of 67,415 kms, carries more than 23 million passengers in its 13,323 trains daily. Though many of us travel by the train frequently, it happens rarely that you experience something – good or bad – that remains with you forever. Those who travelled on the day of ‘Janata Curfew’ just experienced that. After all, they were travelling at a time all of India – perhaps for the first time in the country's history – was at a standstill.

On March 22, between 7 am and 9 pm, India observed ‘Janata Curfew’, whose idea was mooted by Prime Minister Narendra Modi, to encourage the concept of social distancing and curb the spread of the deadly coronavirus.

The Indian Railways announced that it would cancel trains originating between 12 am and 10 pm on March 22. However, the ones that already commenced their journeys before 12 am were allowed to operate till they reached their destinations.

I happened to be on one such train.

Following a one-month break for personal reasons, I was heading to Mumbai from Vijayawada to resume work. Of course, a lot has changed in this month across the world and in the country, which was evidently visible in my near 24-hour journey.

From a platform ticket -- which one usually buys for Rs 10 -- costing Rs 50, to the way passengers treated each other, COVID-19 changed my train experience like never before.

At the platform ticket counter, people stood in the queue with immense discipline, without pushing each other, maintaining a decent distance. While happy, I also reflected that it had to take a deadly virus for us to learn this. Everyone carried their own luggages in the absence of 'coolies'. The stations wore a deserted look.

Vijayawada, the fourth-busiest station in the country (it serves about 1.4 lakh passengers and hosts 330 trains a day), looked like one from the hinterlands of the country. The train I was travelling in – Vishakhapatnam-LTT Express -- bore a deserted look, with many vacant berths. The common sight of multiple passengers occupying a single seat was not to be seen and the few passengers present had the whole berth to themselves. A Journey Without “Chai Chai Chai”

The train left Vijayawada at 6:50 am, but with one difference. Not a single vendor selling bottled water or tea. Imagine a domestic train journey without the ring of the familiar “chai chai” cry of the vendors.

Having packed no food, I hoped I would get to pick up some idlies. But that wasn't to be - the train didn't have a pantry car and I later learnt IRCTC had suspended its catering service. So biscuits and chips and water became our staple.

Finally, we spotted a food stall at a station after a good 10 hours. What did it serve? Non-vegetarian food at a time most wanted to avoid it. More biscuits and chips. There was one big change: while generally we Indians love to socialise on train journeys, this time, the air was clearly tense. There was hardly any communication between passengers. Those who brought food didn’t offer it to others, and if they did, the other didn’t accept.

The other big change: clearly , each person on the train was caring about hygiene. Most wore masks throughout the journey, and cleaned their hands with sanitizers every now and then. I kept cleaning my phones at regular intervals.

Conversation, if any, was all about coronavirus, lockdowns, curfew, trains and flight cancellations. Phones kept ringing throughout the journey with the passengers updating their loved ones about how they were. The truth is all they wanted to check was if their loved ones were coughing or sneezing, and vice versa. Never in our dreams would have we imagined a person sneezing or coughing on a train would be akin to having a time bomb.

As the hours went by, the train pulled into Greater Mumbai region but couldn't complete its full journey. It had to be halted at Thane, some said because other trains ahead had stopped in their tracks, keeping with the Railways' suspension of all trains. 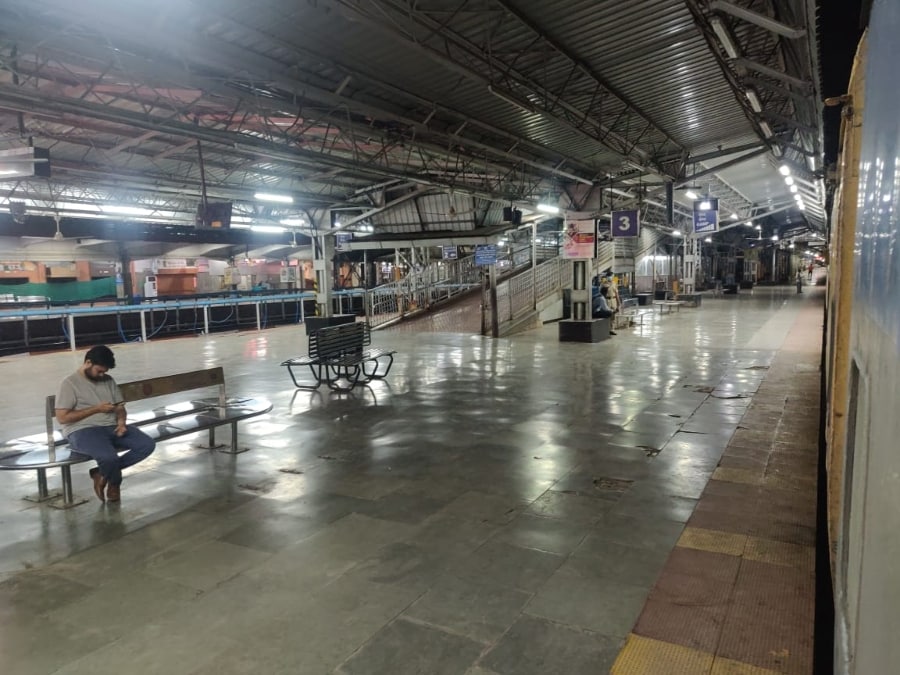 Though the journey was shortened, it felt like one of the longest I have ever had.

It had its positives -- disciplined passengers, a clean train, sparsely crowded platforms and coaches, and travellers maintaining hygiene. But my heart sat heavy that all of this had come at a cost, health-wise and economically.
Tags coronavirus Indian Railways janata curfew Lockdowns Narendra Modi
Published : March 24, 2020 06:46 PM IST