A death in America: Indian-Americans confront racism in the nation

A death in America: Indian-Americans confront racism in the nation This movement, largely peaceful, has ripped across America and re-ignited in many countries across the world from the UK to Japan.

“I can’t breathe” were the last words of George Floyd, an unarmed, handcuffed black man in Minneapolis who died in custody, after his neck was pressed under the knee of a white policeman for 8 minutes and 46 seconds while three officers stood and watched.

These three words have become the rallying cry against injustice and police brutality across America. Millions have marched across hundreds of cities in all 50 states. To watch it in real time on the streets or on television is to realize we are in the midst of history being made, in the birth of a revolution.
This movement, largely peaceful, has ripped across America and re-ignited in many countries across the world from the UK to Japan. What is astounding and a game-changer is the fact that the protesters are black, white and brown and from every strata of society, gender and age. Many of them are young, in their 20’s and 30’s, protesting for the first time. According to Pew Research Center, two-thirds of US adults say they support the movement, with 38 percent saying they strongly support it. Courtesy: Creative Commons
So where do Indian-Americans fit into this unfolding story?
There are several Indian-Americans who are playing a strong role in the civic life of the country, from the legal profession to community organizations. We turned to Manohar Raju who is the elected Public Defender of San Francisco. He is the first Indian-American elected Public Defender in the country and one of the founding members of Public Defenders for Racial Justice.
“It is vitally important to realize that brutal police violence against Black and Brown people is just one part of a criminal legal system impacted by racial inequities at every point,” he says, “It is crucial that we as public defenders continue to speak out about the atrocities that pervade the criminal legal system and continue to fight vigorously--one case at a time and structurally—to bring about more just results and equitable reform.”
The police brutality that George Floyd underwent was captured on camera but not all inequities can be recorded.  As Raju points out, “Inequality under the law is a problem that is hard to capture on video, but it’s something my public defender colleagues and I witness each day. When structural racism and biases pervade courthouses, people’s lives — and the lives of their families — are ravaged by unjust prison sentences. The scrutiny with which the public is now watching police shootings on video needs to be applied equally to American courthouses.”
There is a long history of solidarity between South Asians and the Black Civil Rights struggle in the US, and Raju shares some of the examples: Ram Manohar Lohia taught at the Highlander Activist Training center and was jailed for violating Jim Crow laws; Bayard Rustin, a lead organizer of the 1963 March on Washington, founded a Free India Committee; The Civil Rights Movement led to the Immigration Act of 1965 which opened up immigration for Indians.
He says that Indian-Americans who are not already involved in the racial justice struggle can help by donating their time and money to organizations focused on the empowerment of black communities and protecting their rights.
Vanita Gupta is an attorney who has been empowering the black community all throughout her work as a civil rights lawyer and activist. She is President and CEO of The Leadership Conference on Civil and Human Rights, an iconic organization which lobbied for and won the passage of the Civil Rights Act of 1957, the Civil Rights Act of 1960, the Civil Rights Act of 1964, the Voting Rights Act of 1965, and the Fair Housing Act of 1968. 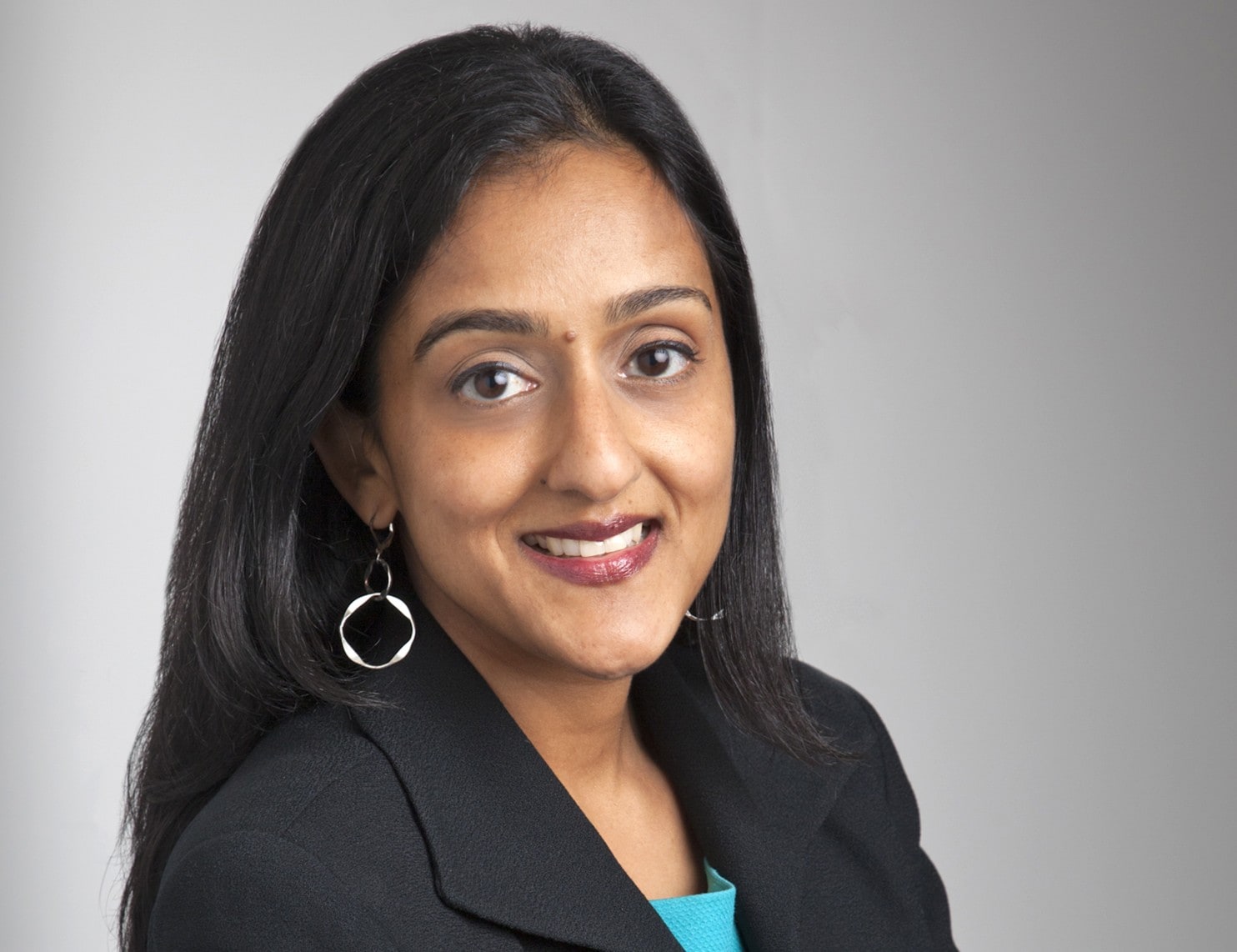 Vanita Gupta
Gupta served as Acting Assistant Attorney General and Head of the US Department of Justice’s Civil Rights Division, and was appointed by former President Barack Obama as the chief civil rights prosecutor for the United States,
Gupta has consistently made news for her bold moves. Her first case, fresh out of law school and working with the ACLU,  changed the lives of 35 mostly blacks who had been convicted on cocaine possession charges and sentenced for 60-300 years. This was almost 10 percent of the 5000 population of the small town of Tulia in Texas. She managed to overturn their convictions and helped to negotiate a $ 6 million settlement for them, as well as have the drug task force responsible for this miscarriage of justice disbanded.
Speaking recently at a virtual Civil Rights Town Hall organized by Indiaspora, a community organization, she said, “Mr. Floyd’s death really reopened wounds that expose the degree to which there are two justice systems, two kinds of sets of communities in this country. The history of police brutality against black people in particular, is a long and storied one.” Monika Kalra Varma With Manohar Raju (The San Francisco Public Defender) and Jamie Allison (Executive Director of the Walter & Elise Haas Fund)
She feels that this confluence of events is a turning point for the nation and there’s a feeling that one can’t go back to normal and people are demanding more of their elected officials.
The Leadership Conference works on civil and human rights in coalition with over 220 organizations and they have asked members of Congress for eight specific changes to address police violence. Over 440 organizations have signed on to the platform and are working with Congress on a comprehensive bill to ban chokehold and create a national registry of police misconduct, among other changes.
Gupta submitted written testimony to the President’s Commission on Law Enforcement and the Administration of Justice highlighting the need for transformative reform of policing at both the federal and state levels.
Monika Kalra Varma, Executive Director at Lawyers’ Committee for Civil Rights of the San Francisco Bay Area, is another Indian-American who has been deeply involved in the fight for racial justice. It is one of the oldest civil rights organizations on the West coast formed in 1968, after the killings of Bobby Kennedy and Dr. Martin Luther King, bringing private attorneys to support the civil rights movement.
“We work with at least 1000 attorneys at different law firms around the Bay Area and the areas of our focus are racial justice, economic justice which is intimately tied to racial justice, and immigrant rights," she says
Working on areas around the protests, she says, “We really look at ways in which wealth and opportunity is taken out of communities of color and ways in which we can put that opportunity back. One of the ways that wealth is taken out of communities is through over-policing.”
While Indian-American communities have also had to face racism, it pales in comparison to what the black community has been subjected to, right from slavery to police brutality. How does she think the Indian community is reacting to the current situation?
She’s pleased at the self reflection that is taking place and that more of the community is joining the conversation. “I think there's a lot of anti-blackness in our own communities and I think we're finally beginning to talk about it, and recognize it. I don't think many members of our community talk about or think about the benefits that we have because of the civil rights movement, because of the black communities.”
Varma believes it is a hopeful time with people looking within and working to mobilize around the protests. Since we cannot put ourselves completely in their shoes, it’s better to follow the lead of those who have actually undergone the experience. She says, “Let the communities that are affected drive this agenda and tell us what's needed and let's get behind and support them. There’s a lot of support from the South Asian community in this moment, and a lot of it is quite frankly just really long overdue and really wonderful to see.”
Lavina Melwani is a New York-based journalist who blogs at Lassi with Lavina.
Read her columns here.
Check out our in-depth Market Coverage, Business News & get real-time Stock Market Updates on CNBC-TV18. Also, Watch our channels CNBC-TV18, CNBC Awaaz and CNBC Bajar Live on-the-go!