A (Swiss) house for Mr Chaplin

Updated : June 27, 2018 05:21 PM IST
The real Charlie Chaplin, the English comic actor, filmmaker, and composer who featured in more than 80 films in his 75-year career.
The restaurant upstairs serves fish and chips in a nod to his London boyhood.

Never before have I been so lost in a 37-acre, 19-room, 3-storied manor. A white neoclassical manor, with carpeted wooden staircase, manicured lawns, a grand piano, a deathbed and junipers and oaks bent with age. I was looking for the Tramp, the little vagrant with baggy trousers, derby hat and bamboo cane. I knew he lived here.

But the silver-haired nearly-leaping old man in the foyer of Manoir de Ban or Champ de Ban Estate Manor in Vevey (Switzerland) startled me. He was not The Tramp who once inspired the hungry-me to eat my shoes (his edible shoes in The Gold Rush were made of licorice) and made me look utterly silly when I, like him, tried the dance of the dinner rolls.

The made-of-wax silver-haired old man? Did I get the wrong address? I was about to walk away when I noticed that impish glint in the old man’s eyes. I knew it was him.

The real Charlie Chaplin, the English comic actor, filmmaker, and composer who featured in more than 80 films in his 75-year career.  Tagged ‘the most famous man in the world’, he boasted “I am known in parts of the world by people who have never heard of Jesus Christ”.

Switzerland - and this home - was fortuitous. In 1952, while on an ocean liner with  his family in Europe, Chaplin learnt that he could not re-enter the United States without submitting to an interrogation about his leftist leanings and morality. He refused to return to the ‘moral pomposity’ of the United States with its ‘hate-beleaguered atmosphere’. “A friend suggested Switzerland,” he wrote in his 1964 memoir, My Autobiography, though author Peter Ackroyd in his 2014 book Charlie Chaplin suggests the lenient Swiss tax code was the big lure. Whatever the ruse, Chaplin lived in this 1840-built manor for 25 years (1952-1977).

The manor has been restored and refashioned into a museum that is part of Chaplin’s World that also includes as immersive cinema space where unforgettable Chaplin movie scenes have been recreated. In the auditorium, images of him flit on a large screen.

The real man melding funnily with the reel man. The restaurant upstairs serves fish and chips in a nod to his London boyhood. In the garden is the ancient cypress, Michael Jackson’s favourite tree that the singer would often climb in a moment of mirth.

His Life on the Walls

However, it is inside the house that one sees the real Chaplin. There’s a grand piano on which he edited the music for his films. Blue walls chronicle his life with Oona, his fourth and last wife, 36 years his junior and the eight children he had with her. In the boudoir, he watches a film unspool from the large projector. In one corner stands Sophia Loren in red; in a bathroom, Einstein is acting goofy.

There’s a large collage of overnight guests who visited him (including Mahatma Gandhi and Pandit Jawaharlal Nehru). One room houses the original luggage with which he travelled around the world and an interactive map narrates his visits to various countries. Death silences laughter in the room with a wooden bed dressed in blue linen on which Chaplin breathed his last on Christmas day of 1977.

In Vevey, I spent the day with Charlie Chaplin. When the gates to the manor closed,  I waited at the Chaplin World bus stop to take me to the banks of Lake Geneva where his bronze statue stands amidst a bed of flowers. The bus was late. No one was watching. I am no Chaplin but I tried to trot jauntily. Like the Little Tramp. 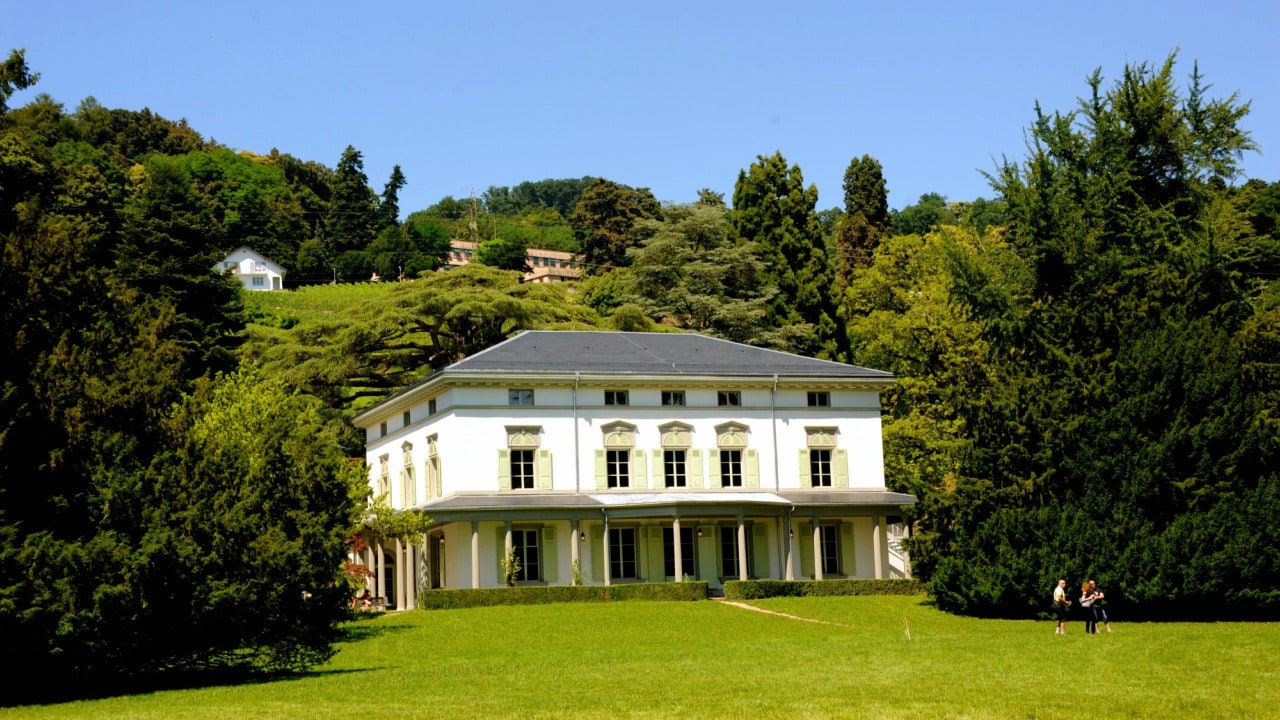 A statue of Einstein inside the Charlie Chaplin Museum in Vevey. 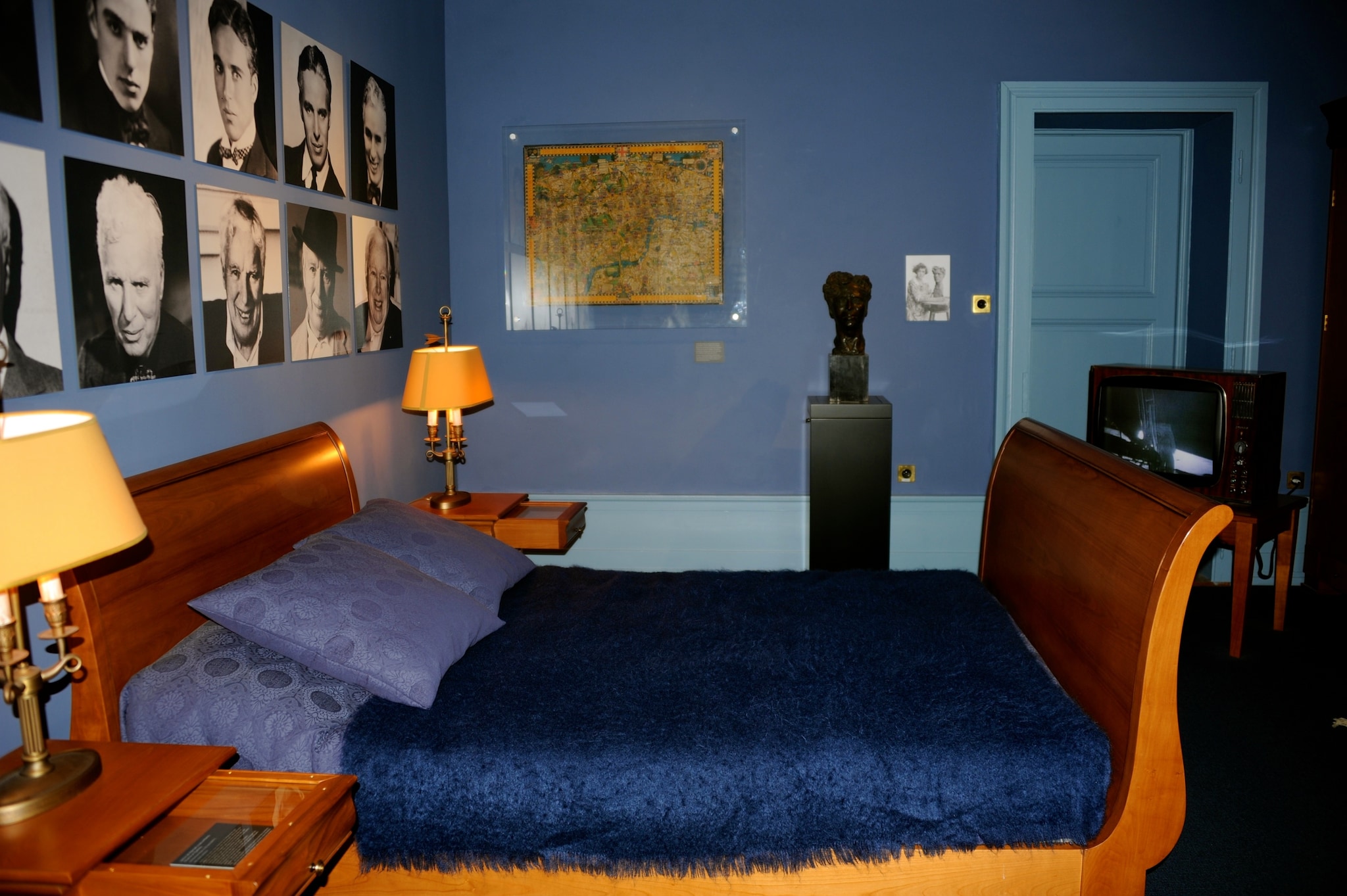 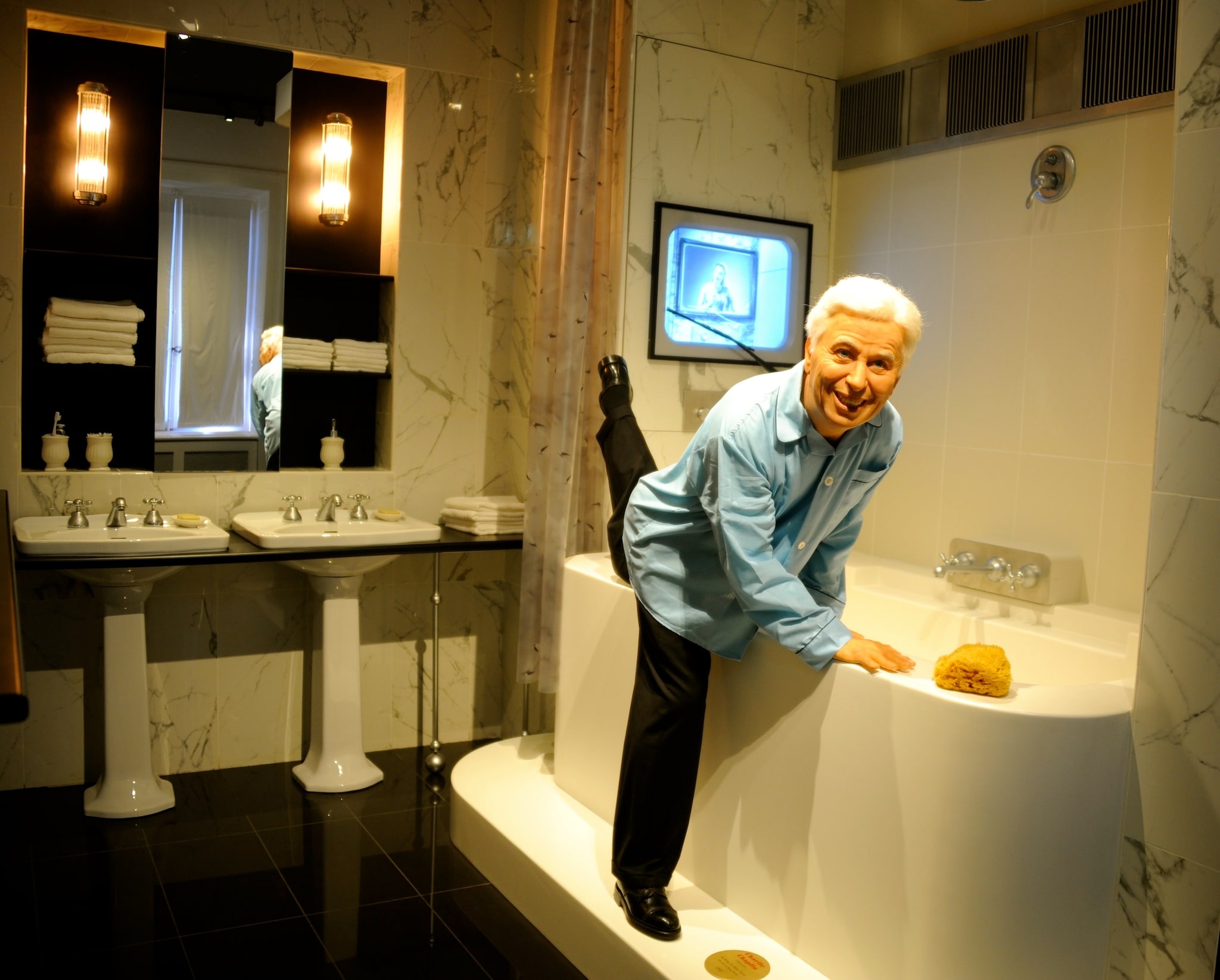 Life-size statue of Charlie Chaplin in his Vevey home. What more in Vevey:

Walk to the banks of Lake Geneva for a look at Vevey’s famed 8-metre tall Fork Sculpture in the sea.

Step into Nestle Art Museum. Do not miss the museum ‘nest’ which is located at the  exact location where Henri Nestle first developed his infant cereal in 1866. The Y-shaped Nestle headquarters in Vevey is still considered one of the most beautiful buildings in Switzerland. 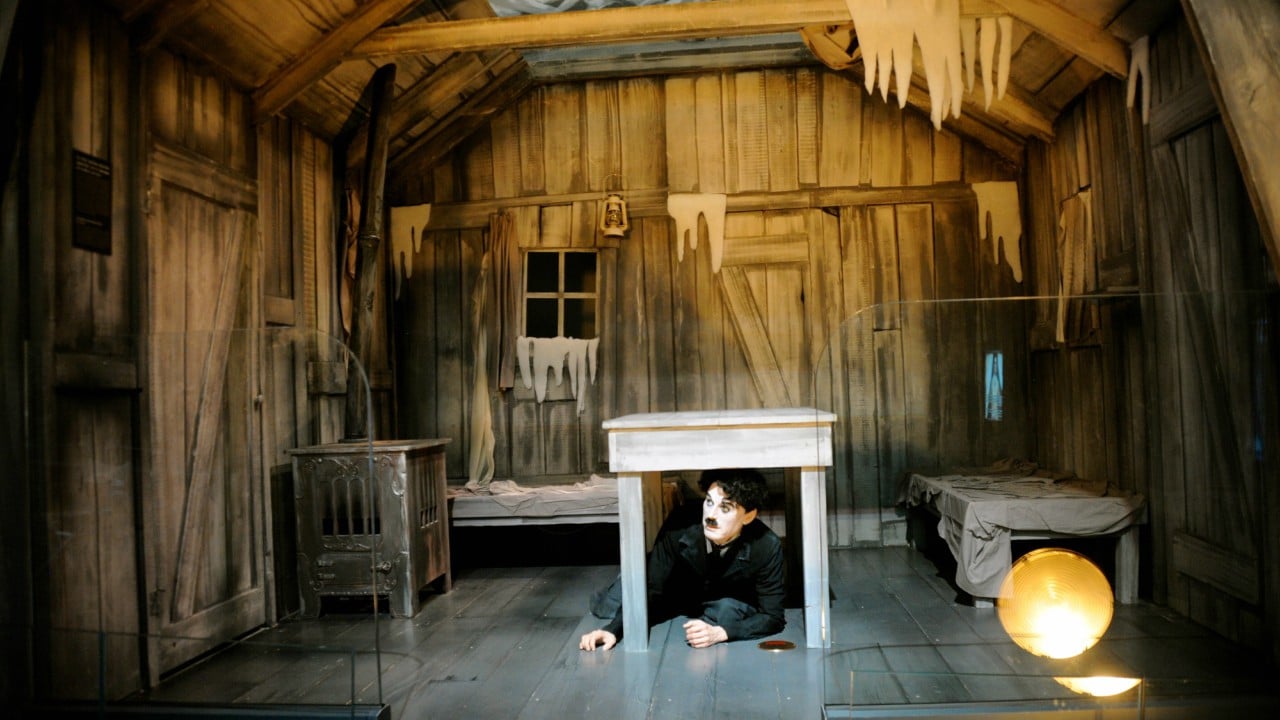 A scene from a Charlie Chaplin recreated in the Museum. 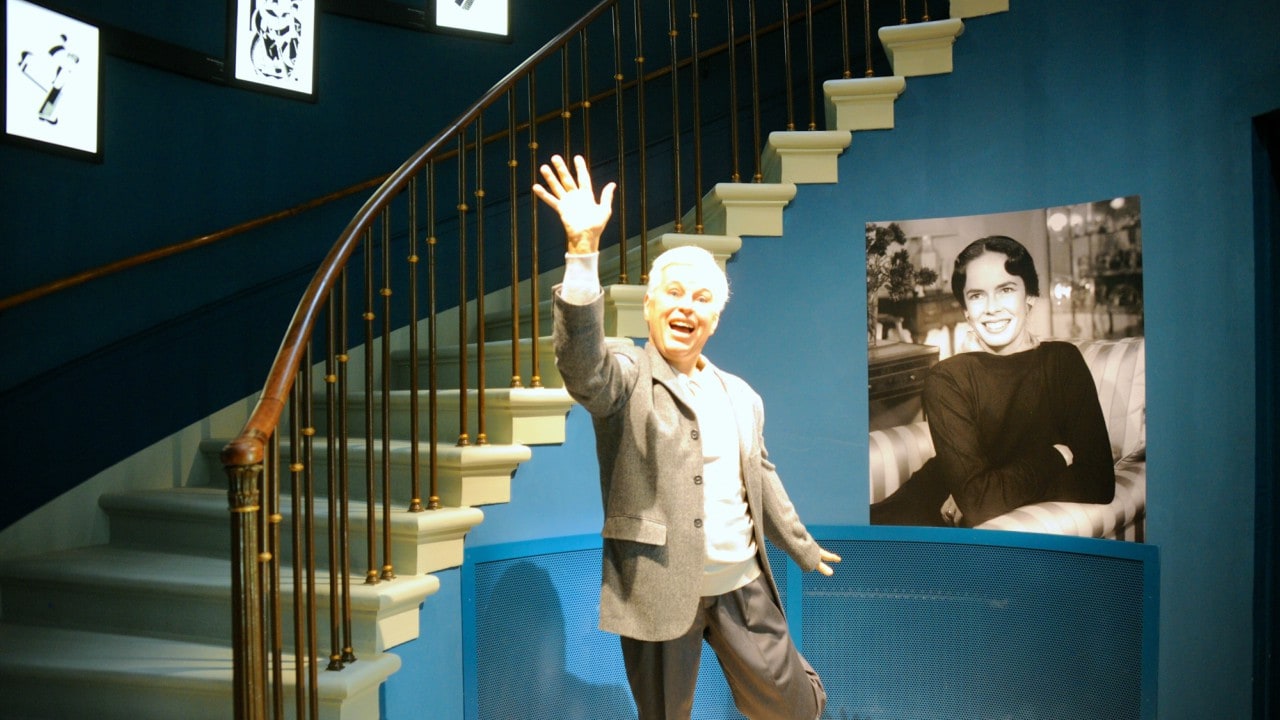 Charlie Chaplin statue at the entrance of his home which is now open to public. Life-size statue of Charlie Chaplin and his wife Oona in their Vevey home.

“The whole point of the Little Fellow is that no matter how down on his ass he is, no matter how well the jackals succeed in tearing him apart, he’s still a man of dignity. He is a man with a soul. A point of view. He has an air of romantic hunger.” - Charlie Chaplin describing the idea of the Tramp, his most famous creation.