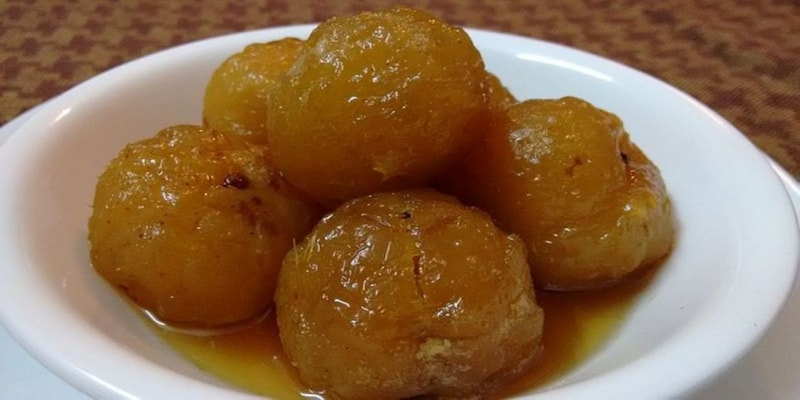 Research conducted to determine whether amla is beneficial for persons with arthritis discovered that it did exhibit a favourable reaction owing to its preventive powers against cartilage.

Almost every Indian home has a pitcher of murabba, a sweet and spicy condiment. When winter comes, it's time to sit under the sun during cosy afternoons and chew on some amla murabba, especially found in every household in Delhi, Rajasthan, Uttar Pradesh and Gujarat.

The infamous murabba has a long history that begins in the ovens of the Arabs and continues all the way to the tables of India. It all started with the notion of preserving fruits so that they could be eaten for months at a time. There is no better time than now to start preparing the meal so that it is ready when winter finally arrives in your city.
But first, let's take a closer look at the murabba and its history to figure out why it became so famous before we offer some recipes.
Murabba, what is it?
The murabba, in its simplest definition, is a kind of sweet preserve created by soaking fruits in a mixture of spices and sugars. Mango and amla are the most common types of murabba, however, other fruits and vegetables including apples and cherries are also acceptable.
The practice of preserving fruit by soaking it in sugar syrup has been passed down through the centuries.
Fruit soaked in a syrup of high-density sugars is supposed to generate an environment with low water activity, which inhibits the growth of germs. This has several advantages, including an increased storage life and a consistent flavour throughout time.
ALSO READ: With its breathtaking scenery and pleasant temperature Shimla is most regal of all hill resorts
Background on the Murabba
Since sugar is crucial to the murabba's preparation, learning the origins of sugar production is essential to understanding the dish's history.
According to popular myth, sugarcane cultivation and processing began in the Indian subcontinent. The Gupta Dynasty, which ruled from around 250 to 350 AD, learned how to extract sugarcane juice by pressing the plant and crystallise it by boiling it.
Once the sugar was secured, commerce and exports paved the way for the murabba's eventual rise to prominence. Jams were initially made in Persia when sugarcane was brought back by Darius the Great after his invasion of India.
Arabs in Persia, upon learning of this technique, set out to investigate its full potential and determine how else it might be used to preserve foods for extended periods of time by cooking them in sugar. Originally known as anbijat, the name murabba was later adopted for these preserved fruits.
But the arrival of the Mughals on the Indian subcontinent is also connected to this dish.
Why do Indians like eating murabbas so much?
The sweet preserves' popularity is due to more than just their delicious flavour. Consider amla, among the most well-known murabbas. Here are some reasons why you should include it in your winter meal plans.
Immune system enhancer
The dish offers a healthy dose of Vitamins A, C, and E in every bite. As winter is when colds and flu are most common, this meal is fantastic to add to your routine.
Amazing for the stomach
Murabba is a great digestive aid since its preparation process preserves the fruit or vegetable's natural fibres. It has been believed to alleviate gastritis when combined with sugar and honey.
Soothing effects on arthritic joints
Research conducted to determine whether amla is beneficial for persons with arthritis discovered that it did exhibit a favourable reaction owing to its preventive powers against cartilage. This is because Vitamin C is vital in facilitating the production of collagen.
Used to treat iron deficiency
By raising the amount of haemoglobin in the blood, amla may be used to treat anaemia and other iron shortages. Women who have excessive menstrual bleeding benefit greatly from this function as well.
Detoxifies the system
Nutritionist Avni Kaul writes that amla is beneficial to include in your diet in an article for Health Shots. “It aids in liver health and detoxification. Both the brain and the neurological system benefit from the use of amla. It helps regulate your immune system and has potent antimicrobial, antiviral, and antifungal activities.”
ALSO READ: Magical and miraculous, here is the Land of Mirages - Deserts in Rajasthan
(Edited by : Sudarsanan Mani)
Check out our in-depth Market Coverage, Business News & get real-time Stock Market Updates on CNBC-TV18. Also, Watch our channels CNBC-TV18, CNBC Awaaz and CNBC Bajar Live on-the-go!