The mystery of spicy chocolate

The mystery of spicy chocolate 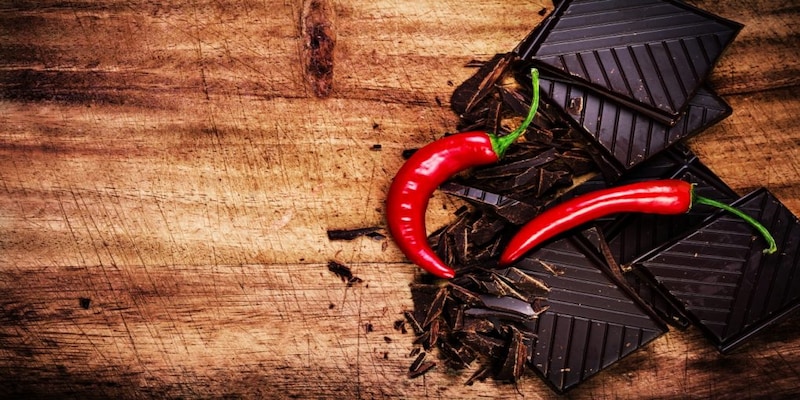 The Aztecs and Mayas created a bitter drink from chocolate and chile that paved the way for modern spicy chocolate. Spicy chocolate often includes chilli, although other spices may be used as well.

What, exactly, is spicy chocolate?
However it's presented, spicy chocolate is always chocolate flavoured with chillies and other spices. One may utilise chocolate in several ways, from making chocolate bars and truffles to baking chocolate desserts. As a result, you can add a kick to just about everything that calls for chocolate.
Spicy chocolate often includes chilli, although other spices may be used as well. Commonly used chillies for spicy chocolate include Mexican ancho, Aleppo, chipotle, cayenne pepper, and guajillo. The flavours of cinnamon and vanilla go particularly well with these spicy peppers. Paprika, cardamom, and ginger are just a few of the possible spices.
Also Read: Visit 8 favourite food markets in London for more ecological fresh delicacies
The popularity of Spicy Chocolate begs the question, of why.
Spicy chocolate is famous because it tastes nice, but not everyone like the combination of chocolate and chilli. Do you recall the first time Remy's brother had cheese and strawberries in the movie Ratatouille? The combination of chocolate and chilli creates a symphony of flavours that is both euphoric and intoxicating. The combination of spicy chocolate and the potency of its beneficial ingredients creates a culinary explosion in the mouth and a positive physical response in the body.
Whence comes spicy chocolate?
The original spicy chocolate, popularised by the Mayans in Mexico, was spiced with chilli peppers, as well as other components including cocoa, water, corn, and chilli powder. Cocoa was carried back to Spain by the conquering Spanish in the 15th century, and a sugared drink variant quickly gained popularity. London didn't have chocolate until the 1700s because the Spaniards kept it a secret for approximately a century. The city soon became home to a proliferation of "chocolate houses," which functioned much as cafes do today. Serving chocolate with milk was the norm in London after the custom was brought there from Jamaica in the late 1700s.
Can you benefit from eating spicy chocolate?
Polyphenols found abundantly in cocoa, are powerful antioxidants that have been linked to a variety of health advantages. Polyphenols have beneficial effects on inflammation, circulation, blood pressure, cholesterol, and glucose regulation.
Also Read: Five best finger-licking foods you can’t miss out on while in Punjab
There are a lot of healthy compounds called carotenoids in chilli peppers. The capsaicin in chilli peppers is the primary carotenoid responsible for the chillies' spiciness. Since capsaicin has anti-inflammatory properties, it benefits cardiovascular health. As a result of their ability to speed up the metabolic rate, chilli peppers may help dieters shed extra pounds. Capsaicin has been shown to be effective as a topical analgesic.
Antioxidants abound in cinnamon, making this sweet, widely used spice excellent for health. There are many polyphenols in cinnamon, just as there are in chilli peppers. In research pitting cinnamon against other popular "superfoods," like garlic and oregano, cinnamon emerged victorious in terms of its antioxidant power.
Cinnamon has been shown to reduce inflammation and promote tissue health in laboratory studies. This suggests that cinnamon's potential health benefits include protecting against heart disease, assisting with blood sugar control in people with type 2 diabetics, lowering "bad" LDL cholesterol, and lowering blood pressure.
Also Read: Is peanut butter really healthy? It depends
(Edited by : Priyanka Deshpande)
Check out our in-depth Market Coverage, Business News & get real-time Stock Market Updates on CNBC-TV18. Also, Watch our channels CNBC-TV18, CNBC Awaaz and CNBC Bajar Live on-the-go!