Drinks, whether those that accompany meals or those that can be enjoyed on their own at any time of day are something that Indians adore even more than their cuisine. In spite of the widespread belief that tea is India's national beverage, there is much more to Indian beverage culture than just masala chai and other types of tea.

When you step foot in India, you are likely to find people gathered in groups enjoying a laugh over a beverage or simply enjoying their beverage in the fresh air. After a long and tiring day, you will see them return to a cup of tea. A beverage is more than just a drink; it is an emotion for Indians. In spite of the widespread belief that tea is India's national beverage, there is much more to Indian beverage culture than just masala chai and other types of tea. 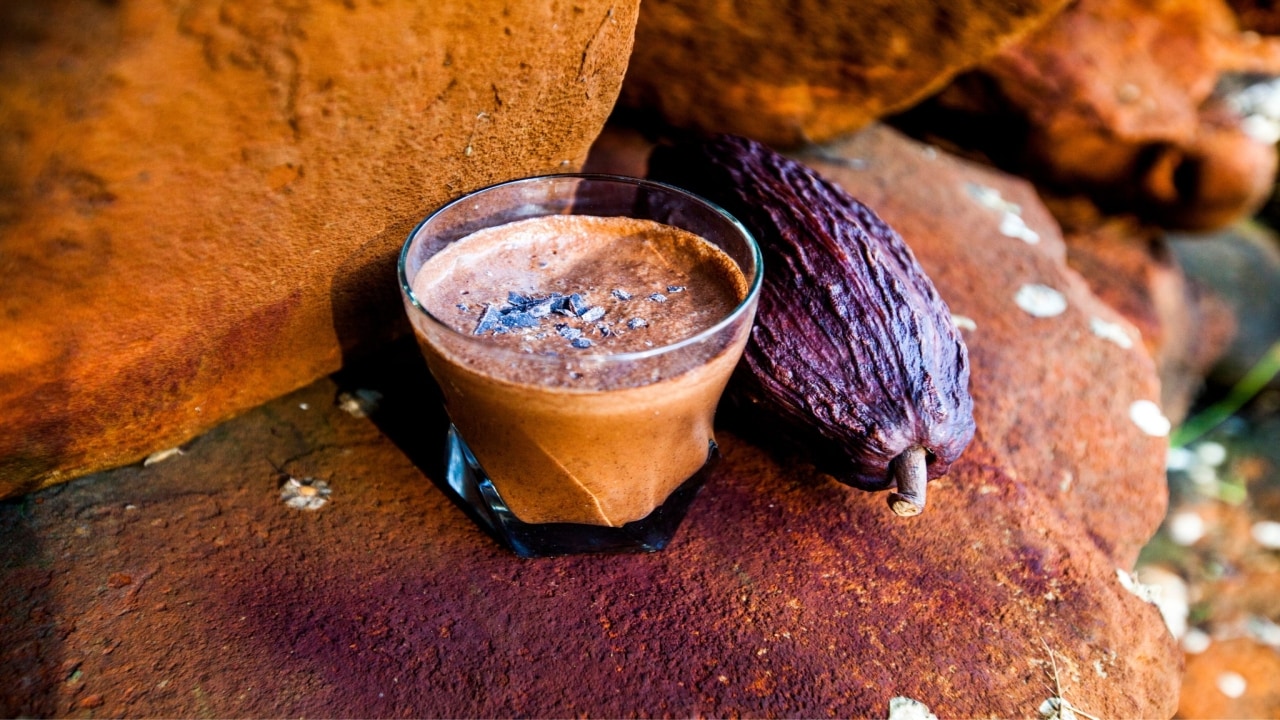 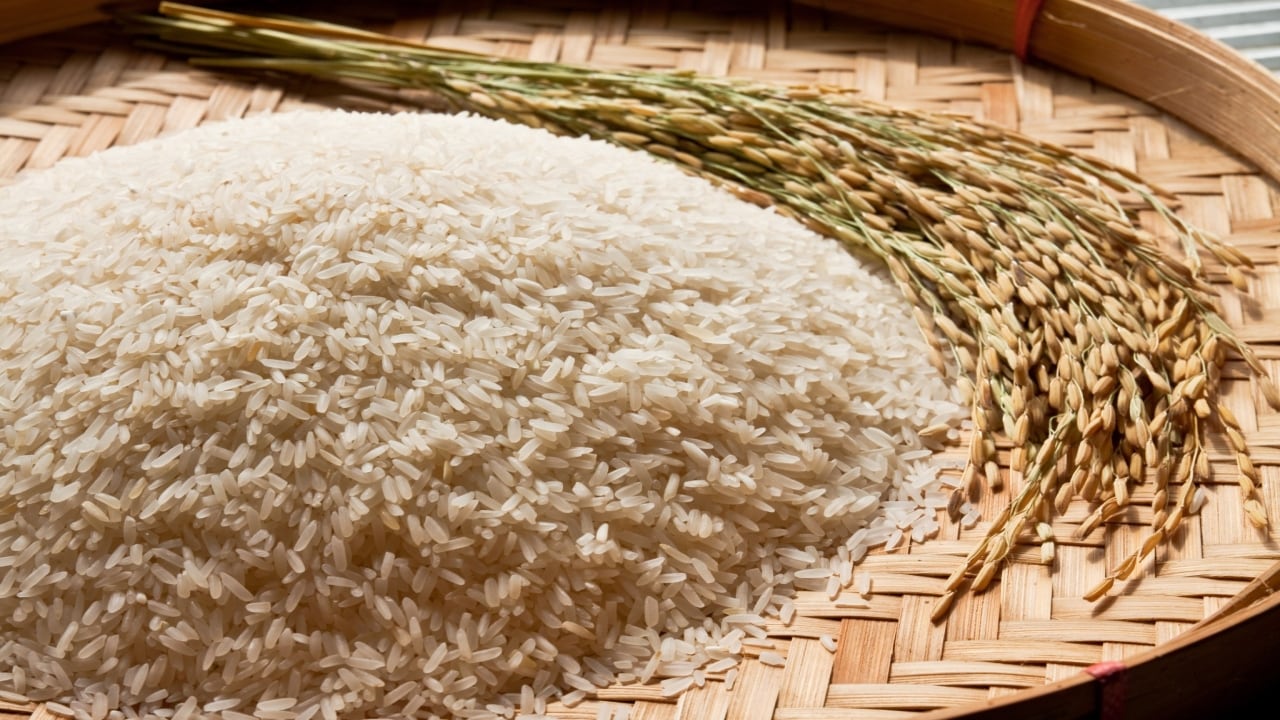 Because Zutho is so nutritious, Angamis will often bring it with them when they go out to work in the fields. They add ginger, chillies, or chutney to this beverage before drinking it.
A wonderful exotic drink serving as the window to the Naga culture that you must try
NUN CHAI THAT TELEPORTS YOU TO KASHMIR KI WAADIYAN
Though with increased access to the internet and a passion for trips to Kashmir, we are all crazy with Kahwa, and why wouldn't we be, it's the ideal drink with various spices and a hint of 'Kesar,' but have you heard of Noon Chai?
Nun Chai and Kehwa Are Much More Than Just Drinks in Kashmir.
The tradition of drinking "Nun Chai" dates back generations to Kashmir. The peculiar flavour and colour of this tea are due to a combination of many things, one of which is the use of baking soda (also known as sodium bicarbonate). An attractive red hue is produced in the brewed tea as a consequence of a chemical reaction between the soda and the tea leaves. To get the desired pink hue, the brewed tea water must be beaten and aerated vigorously to introduce air into the mixture. 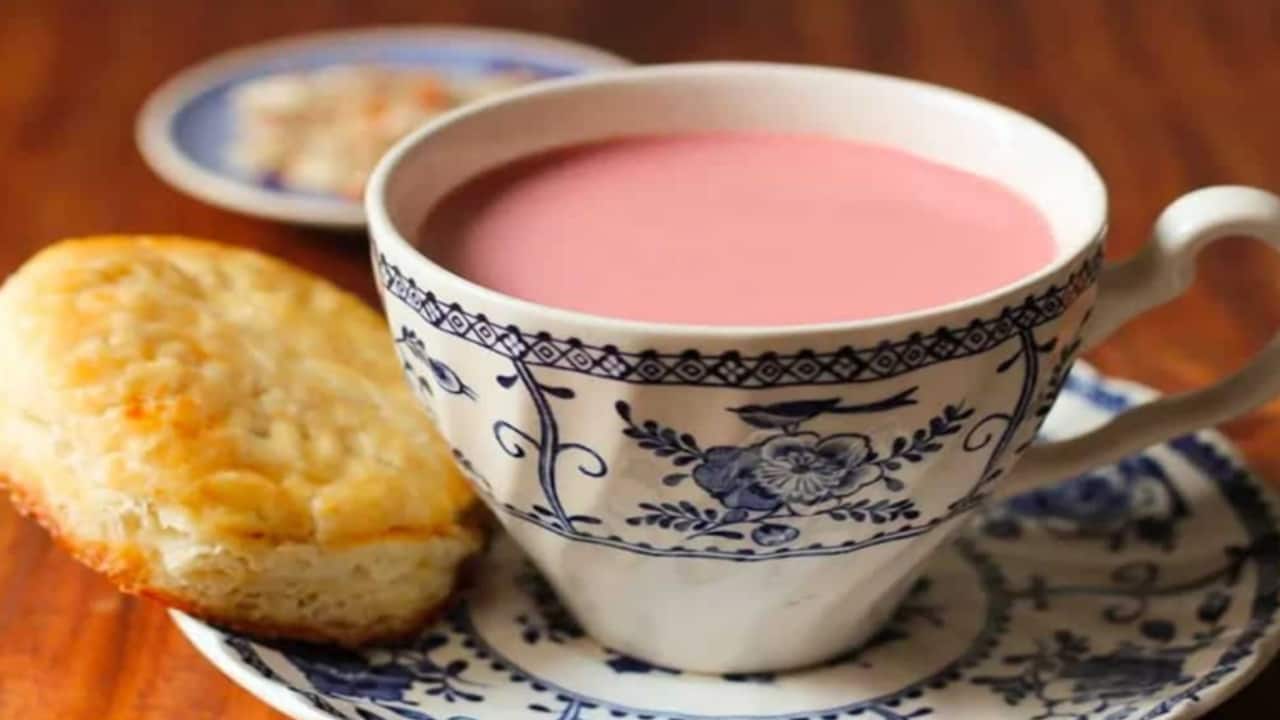 According to local legend in Kashmir, a cup of chai at midday would keep you cool in the summer and warm in the winter. The cardamom and baking soda in this remedy are what give it its reputation for warding off indigestion and gas. L-theanine, an amino acid found in it, has been linked to a decrease in stress and anxiety.
The beverage is often served with naan, a kind of traditional Kashmiri bread, but it also pairs surprisingly well with baked goods like naan khatai, a type of famous Indian shortbread cookie.
Also Read: Just what makes coffee ‘strong’? Caffeine and bitterness aren't to thank
Although it's simple to find the recipe online and much simpler to get the ingredients at any local or online shop. And no matter how the pink tea tastes on the tongue, seeing a blanket of snow outside the window always makes it seem more festive. The authenticity of Noon Chain in ‘Kasmir ki Waadiyan’ hits a different nerve.
NEERA, A NATURAL COOLANT FROM TAMIL NADU
On particularly warm days, the chance encounter with a roadside seller selling tender coconuts or sugarcane juice seems like a gift from heaven. When they taste Neera, the people of Tamil Nadu experience the same sense of gratitude and blessing.
Neera, as many Tamilians will tell you, is not the same thing as juice or water from tender coconuts; rather, it is the whole of the coconut in liquid form.
The traditional non-alcoholic beverage that is derived from the sap of local palmyrah trees has been a popular drink in communities across many different regions of India. This natural drink is high in minerals such as calcium and vitamin C, and it does not contain any alcohol. This extract is also used to make palmgur, sometimes known as palm jaggery. The naturally sweet drink is beneficial for restoring a healthy sugar balance, as well as treating ulcers, heart disease, kidney stones, and anaemia. Consuming the liquid that comes from cutting open a coconut boosts immunity and is beneficial to one's general health. It is safe to consume even for diabetic individuals as well.
This refreshing beverage, which can be purchased with ease on Flipkart, is the best way to unwind during the hot summer months; however, the best place to enjoy it is while driving through the beautiful southern state of Tamil Nadu, which is rich in history and culture.
THE COOLER FROM ODIHSA - MANDIA PEJ
A beverage called mandia pej, which is produced from ragi and rice and originated in Odisha, is a staple food for the Adivasis and other tribespeople who live in the southern part of Orissa.
The technique of creating the drink calls for very little work on the part of the cook. After cooking rice, the water that is left behind is combined with powdered ragi, and the resulting concoction is stored in an airtight container for many days. It is something that everyone makes at home, and it is something that is both inexpensive and filling. After the two components have been joined, there is a waiting period during which fermentation must take place. The combination is then made into a nourishing soup and eaten in order to bring down the fever.
Also Read: Explore the world and discover the best-kept travel secret: Georgian cuisine
You should switch from your usual beverage to this time-honoured drink brought to you by the many ethnic groups that are located in the Koraput region. If you're getting tired of the traditional lemonade, iced tea, squash, and "jal jeera," then you should give this one a go.
This time-honoured beverage not only quenches the thirst that comes on as a result of a long day's work, but it also provides the greatest possible way of relaxing both the body and the mind.
‘YU” FROM THE BALMY SCENIC LAND OF MANIPUR
A state whose culture, history, food, and highly diverse people are what set it apart is most certainly Manipur, and you are most definitely missing out on something major if you have heard of or know about or experienced 'Yu' from Manipur. In Manipur, the herb yu has a long history of usage in traditional medicine, as well as in the role of a sedative and an offering in religious ceremonies. Rice from the area is allowed to ferment, and then the resulting liquid is distilled. Rice and a flattened, dry disc called hamei, which is made from a chopped and powdered wild creeper called yangli, are both used in the preparation of the drink. Together, these two ingredients are referred to as hamei. The locals choose unpolished rice as their primary source of sustenance due to its increased nutrient density, and the local beverage tastes best when it is combined with this kind of rice.
While men take care of the crops during the day, women are responsible for brewing Yu in the mornings and selling it to bigger breweries as well as at their hotels in the evenings so they may make a living. 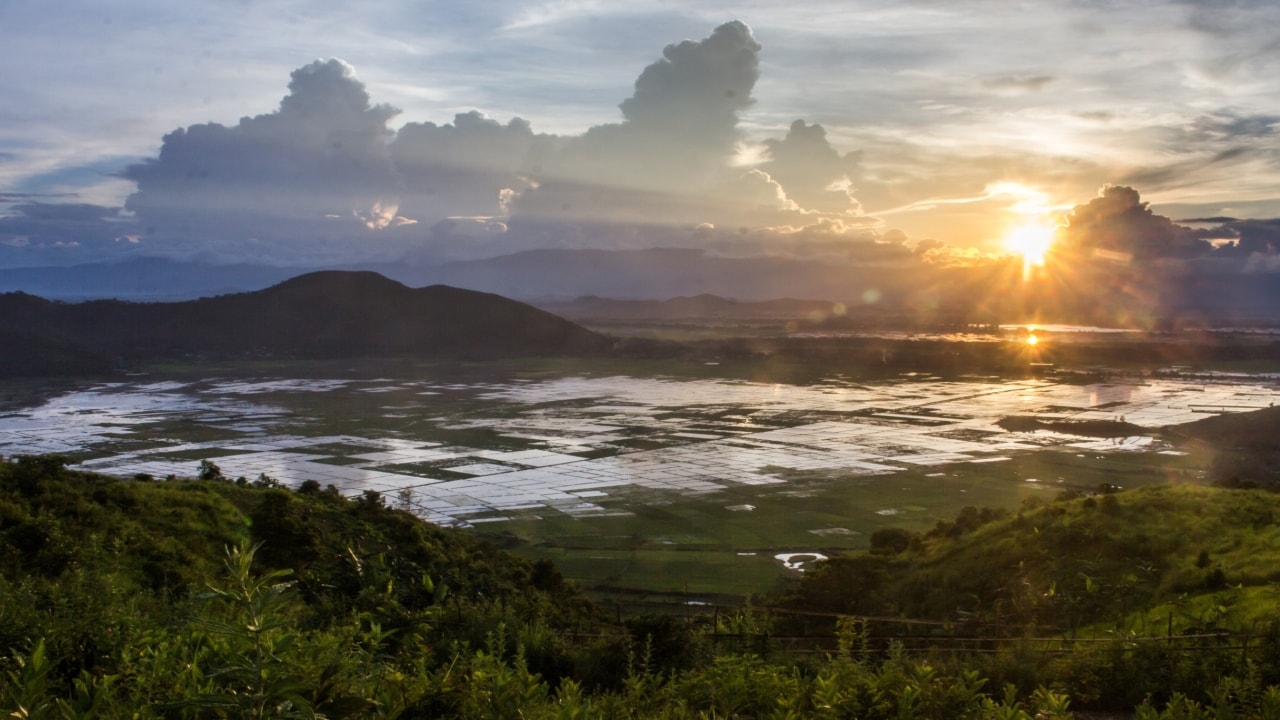 You need to find some time to unwind and appreciate the beauty of Manipur while basking in the glow of your own company and just being in the moment and enjoying a glass of Yu.
THE RED-HUED BURANSH JUICE OF UTTARAKHAND
BURANSH is the scientific name for the plant known more commonly as rhododendron. Because it is the state tree of Uttarakhand and its blossoming is one of the most otherworldly sights visitors may see in the state, a flawless juice produced of Buransh would have been an injustice; however, this is not the case. 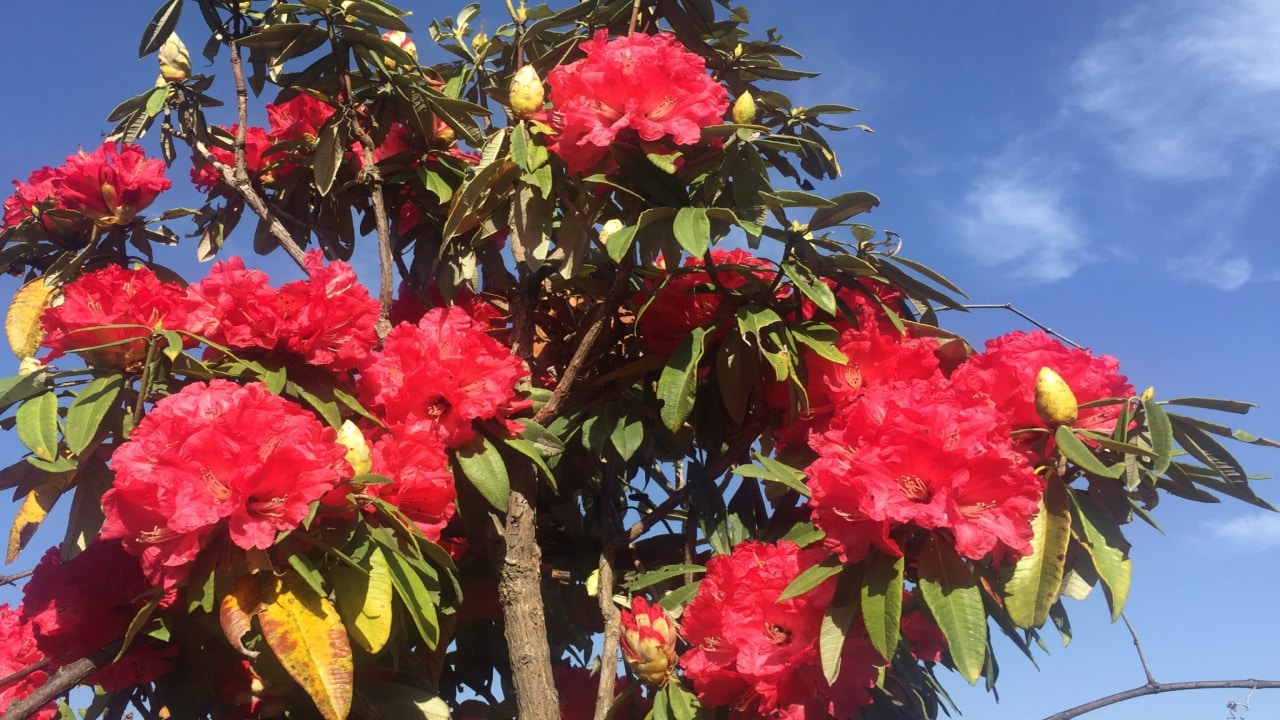 Women in traditional Garhwali villages would harvest these sugary blooms and store them in jars. The flower was originally used for many things, including grinding chutney and pickles, making sacrifices to deities, and treating a variety of illnesses.
This flower was pressed into juice in 1986 and quickly became Uttarakhand’s signature drink.
The drink appears like any other red beverage made with strawberry, raspberry, or rose juices when served in plain glass. With only one taste, though, you realize that it is unlike anything you've ever experienced. The continuous jelly-like sweet and unique flavour will have you longing for it more and more with each and every sip you take.
The delicious juice has been shown in clinical trials to treat cardiovascular disease, diabetes, liver and kidney disorders, and even cancer. The drink's frequent use has also been shown to be effective in reducing the symptoms of minor seasonal illnesses, diarrhoea, dysentery, hair loss, and acne.
Available online and also in shops these lovely red-hued juice must be a vital condiment in your fridge, or just arrive in Uttarakhand and be greeted by this welcome drink of the state.
BUTTER TEA ENJOYED IN THE HILLS OF LADAKH
You may or may not be familiar with the famous butter tea, a salty beverage made by boiling tea with baking soda and salt then, after the tea has cooled, adding a large chunk of butter to the tea in a samovar. This butter is often made from yak's milk using specialised wooden equipment to churn the milk. Tea from Ladakh makes perfect sense, and it tastes much better when enjoyed among the stunning natural beauty of the area. On an average cold day, if you wrap yourself in a blanket and drink a cup of Tibetan butter tea, you may realise that you don't need anything else. This is the best way to battle the icy winds of the Himalayas and with the medicinal advantage of making your immune system strong.
Tibetan butter tea is more than simply a drink; it's a necessity and a symbol of hospitality; when you visit a Tibetan house, your host will likely give you a cup as a means of displaying their appreciation for your presence. Travel to Hemis Gompa (monastery) to have the tastiest butter tea, maybe the best Tibetan salted tea, you'll ever taste. It would be a terrible sin not to try this tea during the winter, and everything they claim is true.
Drinks, whether those that accompany meals or those that can be enjoyed on their own at any time of day are something that Indians adore even more than their cuisine. There is no such thing as a full day in the life of the typical Indian without at least one cup of their favourite tea. However, drinking tea is not the only perk that may be obtained. The variety of beverages available to you has significantly increased as a result of the ones described above.
These are the drinks that are worth tasting, and you should put them on your list in order to have an experience that will make your mouth wet.
When you give them a try, you will find that they completely blow your mind.
So either take a quick swig or give it your all and guzzle it down!
(Edited by : Priyanka Deshpande)
Check out our in-depth Market Coverage, Business News & get real-time Stock Market Updates on CNBC-TV18. Also, Watch our channels CNBC-TV18, CNBC Awaaz and CNBC Bajar Live on-the-go!