Fancy a trip from Paris to Istanbul aboard Orient Express? Be ready to pay...

Fancy a trip from Paris to Istanbul aboard Orient Express? Be ready to pay... 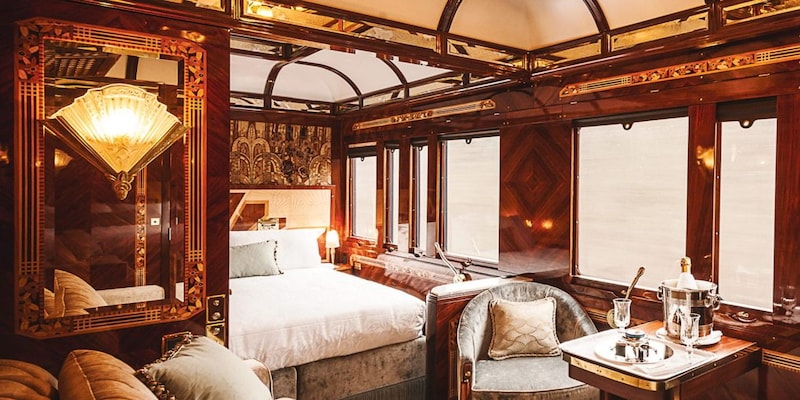 Orient Express Train is one of the most popular and luxurious trains in Europe. The train offers unique experiences and promises unforgettable moments along the way. The majority of society’s class members travelled through this luxury train. And now anyone who is willing to spend $2,300 (almost Rs 1,72,480) for a one-night trip can hop on.

But this is just the starting price to go from Florence to Paris aboard the Venice Simplon-Orient-Express, operated by the LVMH-owned travel brand Belmond. Be ready to pay much more on other routes.
The train has a total of six suites as three new grand suites were added during the train’s closure. The suites now fit two passengers, have bedrooms, lounge areas, private bathrooms made up of marble, and blown Italian glasses. The prices for the same start at $7,200 (Rs 5,39,800) per person for short journeys.
Also Read:
Travel guide: Ultimate North Goa itinerary for budget vacation in Oct-Nov
The majority of trips on this train last one night. But the most popular journey lasts for almost 5 days and it takes on the historic route from Paris to Istanbul. This train travels this route once in a year in August and the cabins usually sell out in a year in advance, said Gary Franklin, vice president, Belmond Trains and Cruises.
Twin cabins for this 5-day journey to Istanbul costs $47,650 (almost Rs. 35,72,500 ) while grand suites go for a whopping price of $1,50,000 (almost Rs 1,12,46,025). All the six suites are as of now booked for the August 2022 annual trip.
The History
The Venice Simplon- Orient Express consists of 11 sleeping cars, three restaurant cars, one bar car, and two staff cars. This makes the train longest passenger train in the country.
Also Read: Green travel: Google updates Maps, Search to help cut emissions, save energy
Franklin, in a conversation with CNBC, said each of the 17 carriages was a part of Europe’s Orient Express, a train that connected Paris and Istanbul. The service later expanded to cities across Europe.
The New Routes
Due to the coronavirus pandemic, the train missed its entire travel season in 2020. It has now been relaunched with new routes. In addition to London, Paris, and Venice, the popular luxury train now travels to Amsterdam, Rome, Florence, Brussels, and Geneva too.
(Edited by : Jomy Jos Pullokaran)
Check out our in-depth Market Coverage, Business News & get real-time Stock Market Updates on CNBC-TV18. Also, Watch our channels CNBC-TV18, CNBC Awaaz and CNBC Bajar Live on-the-go!