In December, the temperature is just right for a trip to the tropics. Also, there are a ton of celebrations planned this month. Exciting extras include adventurous pursuits. And the regional cuisines are gastronomic delights. Decide to go South, and then go South.

South India, one of India's regions, has a wealth of tourist attractions. The southern part of the nation is home to some of the country's most stunning beaches, as well as a wealth of wildlife, historical sites, cultural activities, and thrilling excursions. Discovering new areas in southern India during Christmas is an unparalleled pleasure.

In December, the temperature is just right for a trip to the tropics. Also, there are a ton of celebrations planned this month. Exciting extras include adventurous pursuits. And the regional cuisines are gastronomic delights. Decide to go South, and then go South.
There is a vast list of top wintertime destinations in southern India. If you're planning a vacation to South India in December, you may expect some really unforgettable moments.
Kodaikanal Kodaikanal, known as the princess of all the hill stations in India, is the most popular winter vacation spot in all of South India. Kodaikanal, a small hill station in Tamil Nadu, has picturesque vistas of lakes, waterfalls, valleys, and green hills. Kodaikanal Lake, the main attraction in the area, serves as the focal point of the business. Located at an elevation of 2,000 metres, this lake has the form of a star and is surrounded by verdant trees. Kodaikanal is a beautiful destination to visit in the winter, with fantastic opportunities for trekking to waterfalls and learning about the region's abundant flora.
ALSO READ: From Kedarkantha to Pindari Glacier: Top five trekking destinations in Uttarakhand
One of the nicest things about this winter vacation spot is the ethereal vista of Kodaikanal Lake in the rain. The weather at Kodaikanal may become very frigid in the winter, with temperatures often dropping to the low. It seems like it's snowing because the fog freezes into crystals and then falls on the leaves and other surfaces. Finally, gaur is easiest to see in the woods throughout the winter. The animals are enticed to visit Kodaikanal when the population decreases.
Alappuzha As the ‘Venice of the East,’ Alappuzha (Alleppey) has a stellar reputation. Alleppey, the heart of Kerala's backwaters and home to a vast network of hinterlands and much more than a thousand houseboats, is one of the state's most popular tourist destinations. In Alappuzha, you may stay aboard houseboats that are modernized versions of the traditional Kettuvallams. The Malayalam term kettuvallam comes from the words kettu, which refers to dwelling buildings, and vallam, which refers to boats. Tonnes of grain and spices were formerly transported using kettuvallam, a vessel with a matted covering that spans over wooden hulls.
Houseboats now have all the conveniences of a high-end hotel, including air conditioning, flushing toilets, comfortable seating areas, cooking facilities, and even a fishing deck. From the comfort of a houseboat, you can take in the sights and sounds of life along the coconut tree-lined canals. The tranquil waterways and verdant surroundings make it an ideal spot to relax. The 137-year-old pier at Alappuzha Beach, which juts out into the water, and the Portuguese-built lighthouse from the 17th Century only add to the allure of the area. The city has gained international recognition for its boat racing, marine goods, and coir production.
ALSO READ: Why Bandra is an emotion, and totally must visit locale of Mumbai
Get ready to get lost in the maze of canals that make up this little city's compact downtown and bus terminal. Whether you're headed west to the coast or any other route into the backwaters, you'll find that Alleppey transforms into a sophisticated, verdant oasis as you near the aquatic world of huts, hoofed canoes, toddy stores, and houseboats. Gently drift while taking in views of lush green paddy fields, winding rivers, and quaint riverside villages. This is where nature's finest blessings have been bestowed onto the earth. Visit Alleppey and check out all the top attractions that it has to offer.
Ooty Ooty, a resort town in the foothills of the Western Ghats, is another of South India's top winter getaways. In Tamil Nadu's Nilgiri district, you'll find a place called Udhagamandalam. Famous for its ponds and dams, parks and gardens, tribal museums, tea factories, historical structures, and the ancient Nilgiri Mountain Railway, Ooty was formerly the summer capital of the British-ruled Madras Presidency.
Ooty is well-known in India as a wonderful place to visit during the winter. The tranquillity and soothing effects of Ooty's winter landscape are well-known. In the winter, when fog and mist settle over the nearby hills, the scenery is at its most picturesque. White clouds hover above the beautiful tea estates on the hillsides, creating a picture-postcard scene. More importantly, the cool climate makes exploring the area a pleasurable experience.
Coorg 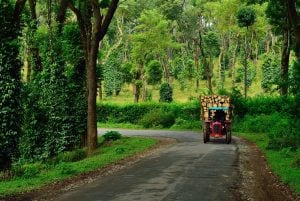 Relaxing coffee aromas will greet you as you open your eyes, and the foggy hills and streams here are a sight to see. Coorg, sometimes called the ‘Scotland of India,’ has earned that nickname because of its alluring blend of historical significance, modern comforts and excitement, and delicious food. The breathtaking beauty and luxury of this hill town in the Western Ghats have made it renowned as a centre for the coffee industry.
The foggy environment is home to the Kodavas, a distinct native clan famed for their expertise in martial arts and their warm hospitality; they are responsible for much of the region's rich culture. Coorg will push you to the extremes of your emotions, from awe at the majesty of this paradisiacal region, to physical challenge on a walk, to in-depth cultural understanding at Madikeri Fort, to heart-pounding excitement at Abbey Falls, to mouth-wateringly spicy curries, to deliciously sweet, handcrafted chocolates.
Since there are so many things to do within the home, it's perfect for every kind of traveller, whether they're in the mood for adventure, exploration, culinary delights, or just peace and quiet. The Keil Poldu (weapons worship), the Cauvery Shankaramana (river goddess return), and the Huttari are just a few of the well-known celebrations (harvest).
Pondicherry Travellers from Tamil Nadu often make a short trip to Pondicherry, one of South India's most visited tourist spots. Union Territory of Pondicherry is around 165 km from Chennai. Pondicherry, a city in India that was a French colony until 1954, is widely regarded as one of the country's best examples of environmental sustainability. Everywhere you look, you'll find a picturesque scene of white French colonial houses, tree-lined streets, and posh stores. Pondicherry is a popular tourist destination because of its picturesque rural landscapes of brown and green settlements against a clear sky on a bright, sunny day.
It is most pleasant to go around Pondicherry from November through February. Now is the time to take advantage of the area's many cafés, wander along its beaches, and partake in water sports. In addition, numerous businesses provide scuba diving and surfing lessons throughout the winter, when the weather is mild and the water is warm. If taking one of these classes has been on your list for a while, winter in Pondicherry is the best time to do it because of the mild weather and low tuition rates. The International Yoga Conference, held annually in January in Pondicherry, is another highlight of the season. One of the highlights of the event is the opportunity to learn new yoga and painting techniques.
The Bottom Line
There are several festivals in the southern part of India in the month of December. Besides that, the weather has never been better. Hampi, Kottamkhuzy, Bidar, Chennai, and Kochi are the greatest destinations to visit in south India in December due to the gorgeous scenery and festive atmosphere. The streets of these cities come alive with festivals such as Kochi Carnival and Kerala's Perumthottam Tharavad, where visitors may witness dance displays, listen to traditional music from indigenous groups, and feast on dishes from the region's culinary masters. We hope that our list of the best places to explore in southern India in December helps you and your loved ones have a wonderful holiday season and a memorable end to the year.
(Edited by : Sudarsanan Mani)
Check out our in-depth Market Coverage, Business News & get real-time Stock Market Updates on CNBC-TV18. Also, Watch our channels CNBC-TV18, CNBC Awaaz and CNBC Bajar Live on-the-go!