Jodhpur is often referred to as 'The Blue City' and here is why!

Jodhpur is often referred to as 'The Blue City' and here is why! 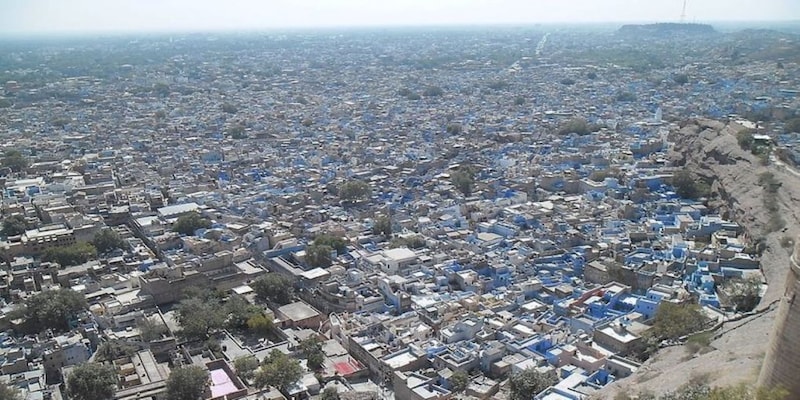 Travelling to this beautiful city would be an educational and unforgettable adventure. The city's rich history is on full display.

Jodhpur, like every other city in Rajasthan, has its own special charm. Jodhpur, the state capital and the second biggest city, is on the edge of the enormous Thar desert. Travelling to this beautiful city would be an educational and unforgettable adventure. The city's rich history is on full display in its many congested streets and alleys, bustling marketplaces, and bustling populations of businesspeople, women in colourful clothing, children at play in the street, cows, and canines that coexist with humans with great ease.

Many of the boxy homes in this community are painted a gorgeous blue, resembling the sea amid the otherwise parched Indian environment, per the creator of the settlement, Rao Jodha. Each of Jodhpur's distinctive hues carries with it a fascinating tale from the city's past.
ALSO READ:
Whopping 500 plus day wait for US visa appointment for Indians, similar delays for UK & other Schengen countries
The original Brahmin population included priests and town elders, and the blue pigment covering a home may have formerly signalled that its residents belonged to this elite group. The Brahmins, who lived in a relatively small section of the city, were able to buy copper sulphate limestone washes for their homes and used them. Blue exterior paint was expensive, and only the Brahmins could afford it, therefore the colour became symbolic of aristocratic status. While traditionally blue was associated with Brahmin households, in modern times it has become a symbol of belonging for those of other castes as well.
There's also the idea that blue reflect the Sun's heat well, helping to keep interiors cool. Since none of Rajasthan's other major towns shares this quirky colour scheme, it's hard to see how this explanation might work. There was also the fact that insects were known to eat through lime mixture walls and buildings, which was more of a functional purpose than an aesthetic one. Insects may be kept at bay with the use of copper sulphate. Under certain situations, copper sulphate changes colour, giving the homes their signature blue hue.
From this vantage point, you can see the ancient city of Jodhpur, which is known for its distinctive blue homes, as if you were flying over it. The magnificent Mehrangarh Fort is perched on a 125-metre-high hill, reached by a meandering road. The walls reach heights of 36 metres, providing an extra bit of protection. From these heights, visitors can see why this ancient city is known as ‘the blue city,’ even if they don't know the full story behind the colour's prominence.
Palaces, sand dunes, massive forts, and rough camel rides—are just some of the reasons to visit this region. The scenery is breathtaking, and any time spent there will be time well spent.
ALSO READ: When to travel to Leh and Ladakh: Ideal season to plan your vacation
(Edited by : Sudarsanan Mani)
Check out our in-depth Market Coverage, Business News & get real-time Stock Market Updates on CNBC-TV18. Also, Watch our channels CNBC-TV18, CNBC Awaaz and CNBC Bajar Live on-the-go!