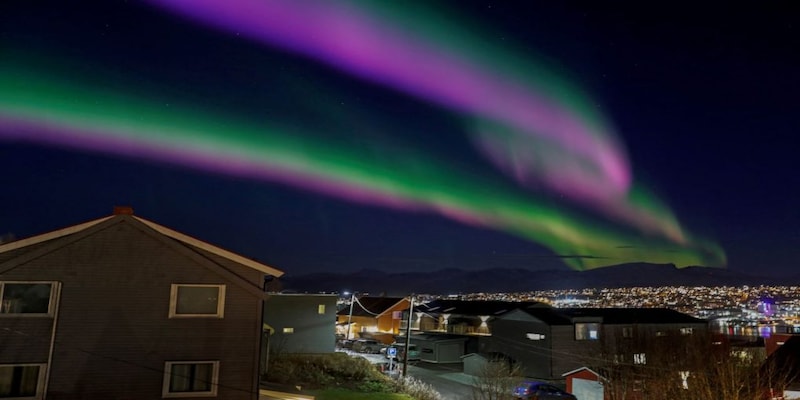 There are still plenty of people that choose to visit the capital of Iceland. It's easy to lose track of the Northern Lights between all the geothermal hot springs, volcanic hikes, and fascinating museums

Many people put off seeing the northern lights until they are older or have retired because the conditions must be just right for such a spectacular show to occur. However, there's some good news: the Aurora Borealis should be visible right now. December through March is often the greatest time to witness this elusive natural phenomenon because of the extended hours of darkness and bright night sky during those months. Moreover, the tourism sector is eager to assist you in seeing the northern lights by providing you with new lodging options, specialised excursions (including one directed just at ladies), and other one-of-a-kind adventures.

We've compiled a list of the best places to go to see the celestial ballet based on their reliability, visibility, and other factors.
1. Tromso, Norway
The city's prime location in the aurora region in the Norwegian Polar region has earned it a reputation as a top destination for Northern Lights enthusiasts from across the globe. As the Northern Lights may be seen in Tromso from September to April, making it a favourite destination for British tourists. The flight time from London is about 3.5 hours. There are more taverns and pubs per person in this city than in the whole of Norway combined.
2. Lapland, Sweden
Getting to Kiruna, the crown jewel of Sweden's wilderness is a profoundly gratifying experience since it offers a good aurora display away from the crowds of visitors. With a population of just 18,000, the Arctic is essentially uncharted territory. The alternative is to visit the town of Jukkasjärvi, home to less than 600 people, and stay at the ICEHOTEL. From October to March is prime time to see the lights, however early and late displays with prolonged clear weather are not unheard of.
The Lule archipelago in Swedish Lapland is another great spot, both for its dark skies and the abundance of winter activities—like camping, husky dog sledging, and ice fishing—that can be enjoyed in conjunction with the watching. Additionally, beginning in December 2021, there will be a direct connection from the United Kingdom to Lule, making a trip to Swedish Lapland easier than ever before.
3. Reykjavik, Iceland
There are still plenty of people that choose to visit the capital of Iceland. It's easy to lose track of the Northern Lights between all the geothermal hot springs, volcanic hikes, and fascinating museums. However, we strongly advise against it, since this performance is very repeatable.
ALSO READ:  Trails of Royal India: Visit these destinations that were once ruled by Maharajas
Similarly to Tromso, the months of September through April are prime times for seeing the Northern Lights. Go to Hofdabrekka, which is close to Vik in south Iceland, to see the spectacle in tranquil seclusion. Getting to Reykjavik is easy and affordable because of the city's proximity to the airport and the fact that it's a fairly walkable metropolis.
4. Yukon, Canada
There aren't many sites that are as isolated, wild, and gorgeous as this one, making you feel so far off from civilization. Combine it with a multicoloured display of solar wind with magnetic disturbance, and you may get the finest natural experience conceivable in Canada during a display of the Northern Lights. Beginning in late August and continuing through the winter and into the early spring, the display is available to see.
5.  Rovaniemi, a town in Finland
Rovaniemi, Finland, exemplifies the snowy wilderness since it is located above the Arctic Circle. You may spend your days in Lapland doing exciting activities like Siberian dog sledging, ice fishing, and snowmobile safaris in preparation for the highlight of your trip: seeing the Northern Lights. The best time to visit Rovaniemi is between September and April, which is also the peak season in Scandinavia. Even better, it's the North Pole, so it's the perfect spot to spend Christmas with the kids.
ALSO READ: 3 unique homestays in Kerala that make for a perfect soul soothing retreat
Alaska, Greenland, Canada, Iceland, Norway, Sweden, and Finland, all located north of the Arctic Circle, are among the world's finest vacation destinations. However, you shouldn't restrict yourself; the southern lights are visible from the southern hemisphere as well. The aurora lights are still the main attraction.
You should plan your trip around the new moon for optimal viewing conditions. It's important to stay alert all night long for the northern lights because they can appear and vanish suddenly.
(Edited by : Sudarsanan Mani)
Check out our in-depth Market Coverage, Business News & get real-time Stock Market Updates on CNBC-TV18. Also, Watch our channels CNBC-TV18, CNBC Awaaz and CNBC Bajar Live on-the-go!