Delhi Republic Day Parade Full Dress Rehearsal: The parade will start at 10:30 am on Monday from Vijay Chowk and will proceed towards the Red Fort. The Delhi Traffic Police said traffic restrictions are effective on Monday, as well as, on and Tuesday in Delhi. Check routes to avoid and metro timings here:

The Delhi Traffic Police has issued a traffic advisory in view of the Republic Day Parade Full Dress Rehearsal on Monday. Several arrangements and restrictions have been put in place to ensure the smooth conduct of the rehearsal. In its advisory, the Delhi Police informed about the route of the parade, suggested routes and bus terminating points, apart from traffic restrictions.

The parade rehearsal will start at 10:30 am on Monday from Vijay Chowk and will proceed towards the Red Fort. It will pass through the Kartavya Path, C-Hexagon, a roundabout statue of Netaji Subhash Chandra Bose, Tilak Marg, Bahadur Shah Zafar Marg, and Netaji Subhash Marg.
TRAFFIC RESTRICTIONS:
> No traffic will be allowed on Kartavya Path from Vijay Chowk to India Gate from 6 pm on Sunday till the end of the parade on Monday.
> C-Hexagon-India Gate will be closed for traffic from 9:15 am on Monday till the parade crosses Tilak Marg.
> From 10:30 am on Monday, traffic on Tilak Marg, BSZ Marg, and Subhash Marg will not be allowed in both direction. Cross-traffic will only be allowed depending upon the movement of the parade.
For suggested routes and bus terminating points, check the chart below 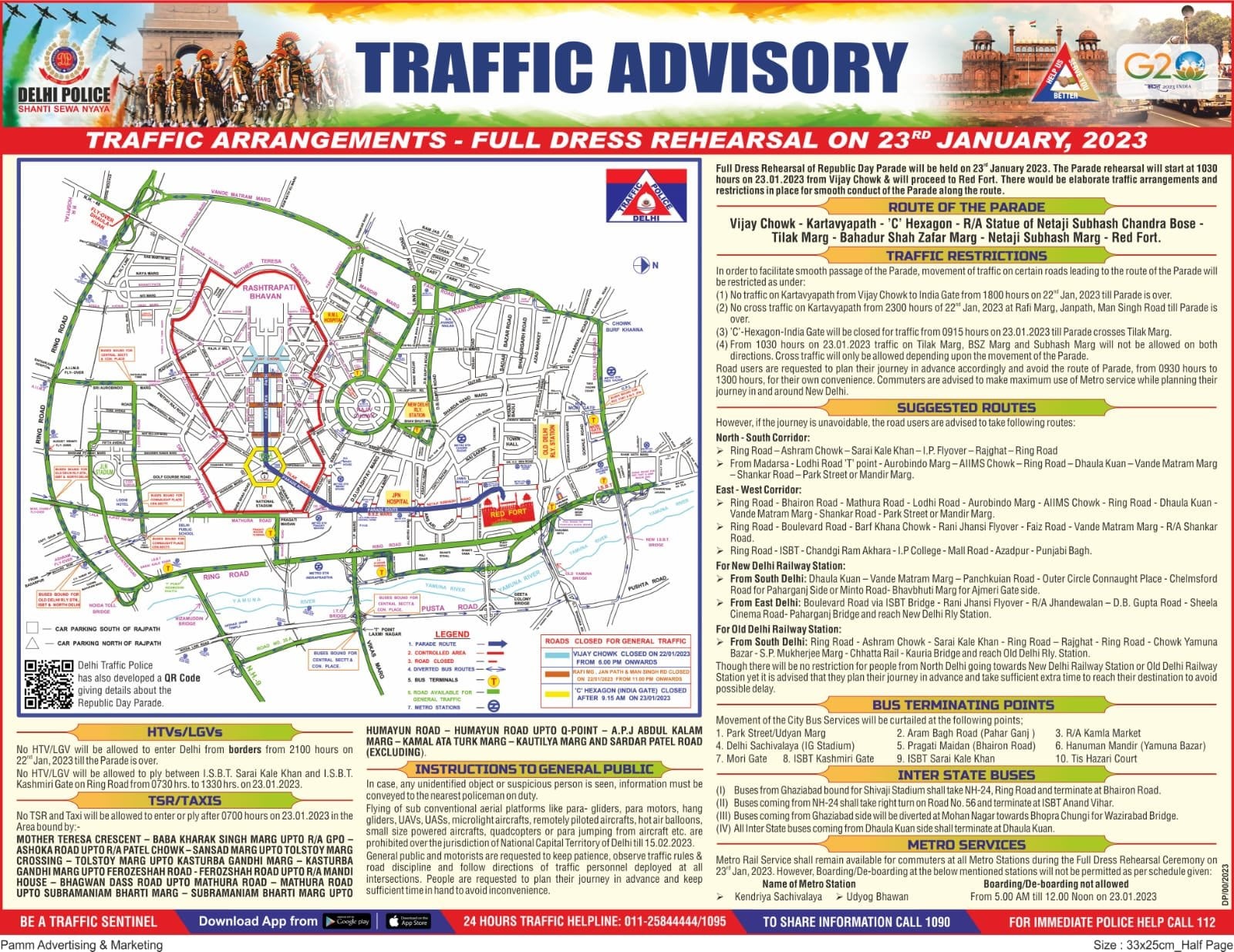 (Credit: Delhi traffic police)
METRO ROUTES
The metro services will remain available for commuters at all metro stations. However, boarding and de-boarding at Central Secretariat and Udyog Bhawan metro station will not be allowed from am to 12:00 pm.
RESTRICTIONS ON JAN 24
Keeping in view the Military Tattoo and Tribal Dance programme as part of Republic Day Celebrations 2023 at Jawahar Lal Nehru Stadium, the following traffic restrictions are effective on Monday and Tuesday in Delhi: