Internet For All: The four pillars of 5G era listed out by Prime Minister Modi

Internet For All: The four pillars of 5G era listed out by Prime Minister Modi 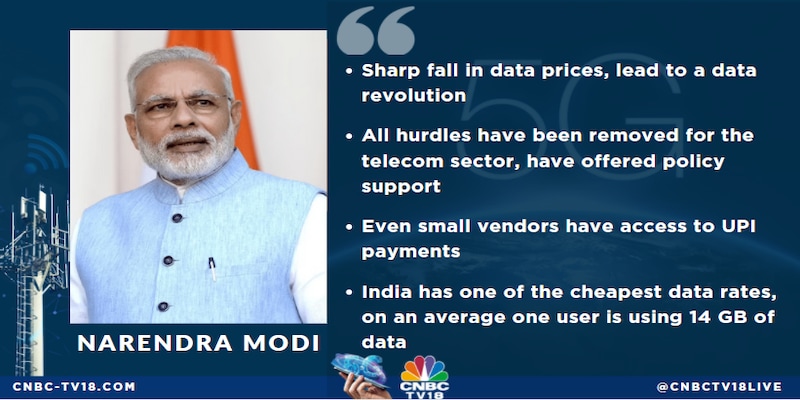 Narendra Modi said the government was also working towards "Internet for All", similar to the lines of delivering electricity, water, and gas connections to every Indian household.

The Prime Minister officially launched 5G services in India on the opening day of the Indian Mobile Congress in New Delhi.
Addressing the gathering, Modi said that today's summit might be global, but its repercussions and directions are local. “5G is a knock on the doors of a new era in the country. 5G is the beginning of an infinite sky of opportunities."
Also Read: India may have started late but will finish first, says Mukesh Ambani at 5G launch event
India has now become the second largest manufacturer of mobile phones in the world, according to the Prime Minister, and that is courtesy of the Aatmanirbhar push. "Until 2014, almost all our mobiles were being imported. Hence, we decided to become Aatmanirbhar in this sector," he said. India now has over 200 mobile manufacturing units from just two of them until 2014.
The Prime Minister also emphasised the government's efforts to encourage the private sector to manufacture mobile phones in India through various incentives, which are now visible in the form of the PLI schemes. In the first year of the PLI scheme for the sector, telecom equipment manufactured over Rs 6,200 crore worth of products with an investment of Rs 247 crore.
Also Read: India 5G launched today: When will you, the customer, get it?
"Because of all of this, we are now getting more features in a mobile device at a lower cost," Modi said.
The PM highlighted that India had grown to have over 800 million mobile phone users from just 60 million 2014. The number of citizens with an internet connection have also grown from 250 million in 2014 to over 850 million presently.
The government is also working towards "Internet for All", similar to the lines of delivering electricity, water, and gas connections to every Indian household, according to the Prime Minister.
The Prime Minister also expressed confidence that India will not only take advantage of the fourth Industrial revolution but will also play a leadership role in it.
Also Read: 5G Launch: Telecom industry is at the heart of all things digital, says Ashwini Vaishnaw
Check out our in-depth Market Coverage, Business News & get real-time Stock Market Updates on CNBC-TV18. Also, Watch our channels CNBC-TV18, CNBC Awaaz and CNBC Bajar Live on-the-go!