5G is here in India, but how much will you be paying for it?

5G is here in India, but how much will you be paying for it?

5G promises to deliver data speeds 100 times faster than 4G, now as India is gearing up for a 5G rollout here comes the question — how much the world pays for 5G and with the 5G network’s great connectivity, will there come great financial responsibility for Indian users? Here is what we know from the global experience and expert estimates.

Prime Minister Narendra Modi will launch 5G services in India during the inauguration of the Indian Mobile Congress in Delhi on Saturday morning.

As telecom companies gear for the rollout, a couple of questions on everyone’s mind are: will data plans become expensive? Or will Indians pay the same rate for 5G on existing plans, but recharge more frequently as 5G uses up data faster? 5G promises to deliver data speeds 100 times faster than 4G and provides throughput (a measure of how many units of information a system can handle in a given amount of time) up to 10 gigabytes per second. It also promises to reduce latency (the wait before transfer of data begins) to less than 1 millisecond (ms) from the current ~50ms (in a 4G network).
Also read:  Reliance rises and Airtel dips as record 5G bids highlight neck-and-neck competition
Globally telecom companies in many countries have deployed 5G networks. As of June 2022, over 70 countries had 5G networks, up from only 38 at the beginning of 2020, according to a report by Global Systems for Mobile Communications Associations. 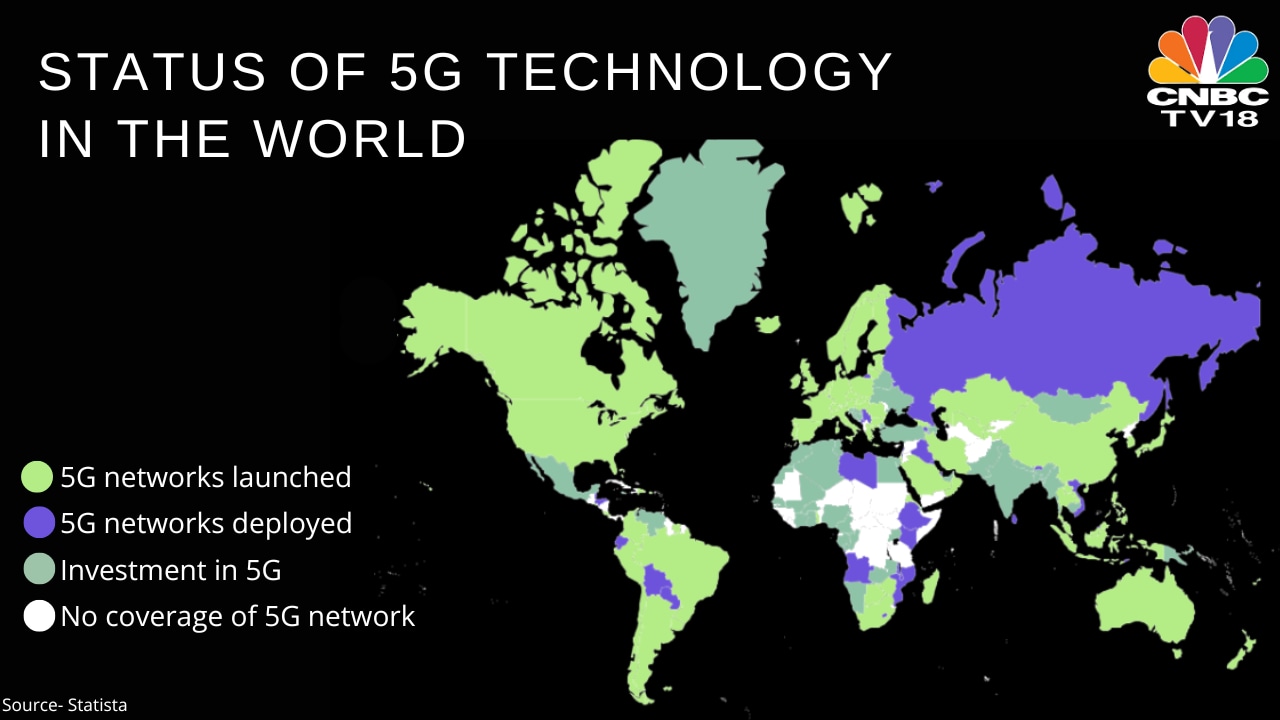 This year, it's projected that 5G will have 1 billion users worldwide.
With this comes the question — how much the world pays for 5G and with the 5G network’s great connectivity, will there come great financial responsibility for Indian users?
How much does the world pay for 5G?
As per a report from Global Systems for Mobile Communications Associations (GSMA) published in 2019, South Korea operator SKT provides 1GB of 4G data for nearly $7 and charges $0.32 for 5G. Another operator, LGUPLUS, provides 5G data at $5 per GB, while 4G data is priced at nearly $20 per GB.
Also read: Bharti Airtel awards its first 5G contract in India to Ericsson
Verizon, the biggest telecom operator in USA, only has unlimited plans currently. The average monthly tariff for 4G data is priced at $40, while for 5G it is $58. In Switzerland, telecom operator Sunrise offers 1GB limited data for 4G at $35 while 5G data is priced at $55.
In the UK, telecom operator EE offers 1GB limited 5G data at $1.15 while 4G data is offered at around $3. 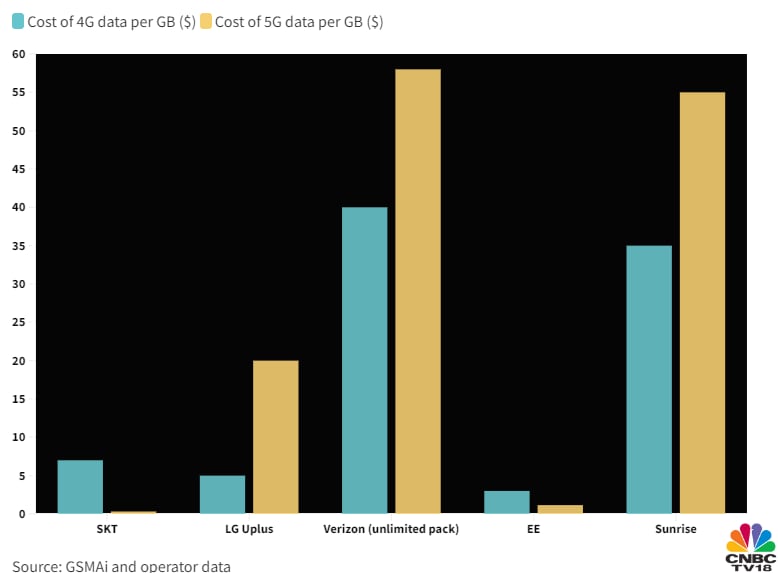 The GSMA report points out that the average cost for 1 GB of data on 4G is $17 compared with $13 on a 5G network, but the faster speed of 5G means more data is exhausted faster, which results in users buying more data packs, spending more money per month despite the lower rates.
Experts point out that as 5G is a new technology — telecom companies, initially, offered 5G at lower rates and gave add-ons like music subscriptions to attract users. For instance, in a few countries in Europe, telcos provide 5G services at no extra premium as compared to equivalent 4G plans. In the UK, US and China, there is a premium on 5G plans and they come bundled with add-ons.
Here's what India can expect from 5G based on the global experience:
“The objective is to give consumers time to experience 5G with a moderate access fee and thus reduce 5G entry barriers. In some markets (UK) telcos are offering more data tiers to facilitate the migration to 5G services without creating many pricing disruptions. They offer a wide range of 5G service plans across different data buckets to ensure it is affordable,” said Sunil David, Co-Chair, Digital Communications Working Group, IET Future Tech Panel.
How much will Indians have to pay for 5G?
Taking into account this global analysis, we estimate that for Indians, the 5G rollout can play out in two ways:
First: Telcos charging a premium for 5G services. In this scenario, David expects a tariff increase of anywhere between 20 to 30 percent for Indian consumers wanting to migrate to 5G services.
Nomura Global Markets Research estimates that telecom service providers would require a modest 4 percent incremental tariff hike on their overall subscriber base or a 30 per cent premium over 1.5 GB/day 4G plans, following the spectrum acquisition. The last tariff hike of 20-25 percent by the three major telcos happened last November-December.
Second: The second scenario can be reverting to the strategy when 4G was rolled out in India. Telcos had offered a standard pack for both 3G and 4G, and users were allowed to switch between the two through network settings on their smartphones. The strategy worked well as users shifted to 4G. As per the government data issued in April in the parliament, 98 percent of India’s population is covered under 4G. Hence although both 3G and 4G were priced at similar rates, 4G users had to buy more data, or opt for higher-priced unlimited packs and telcos also gradually increased the tariff rates.
“In India, the median 4G download speed is 14 Mbps as per Speedtest’s recent reports, compared to a global average of 30 Mbps. Assuming most 5G services are delivered to consumers leveraging the mid-band spectrum, the average download speed is expected to vary anywhere between 50 Mbps to 300 Mbps depending on how the spectrum is managed by the telcos. Given this situation, one would expect a 1GB of 5G Data to be exhausted anywhere between 5 to 10 times quicker compared to 4G services.” added David.
Are Indians willing to shift to 5G?
As per a recent survey by Ookla, 89 percent of Indian smartphone users are ready to upgrade to 5G. The survey spanned a sample of 2,000 smartphone users above 18 years in urban and rural areas. Interestingly as per the same survey, almost half of the respondents (48 percent) plan to upgrade to 5G as soon as service is available in their area and would consider switching telcos if necessary. Less than 2 percent of the respondents do not wish to upgrade to 5G. 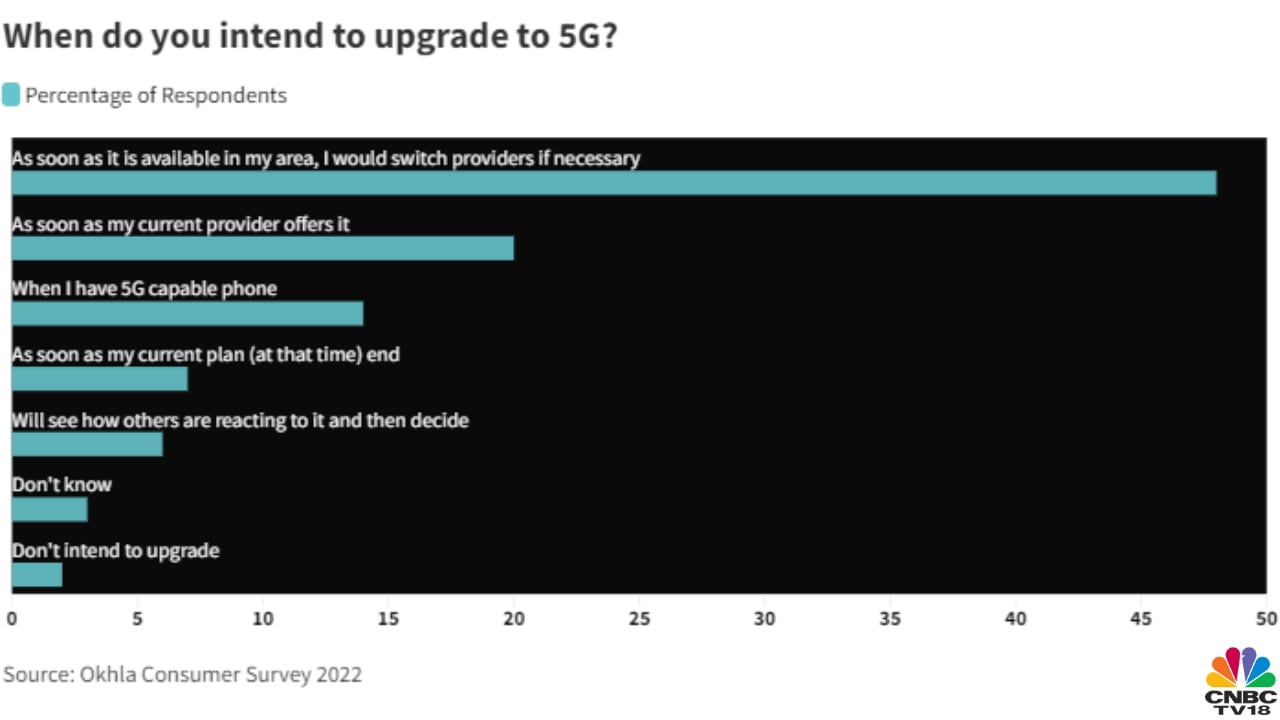 “Ideally I would look at what speed and bandwidth are being provided with 5G in my area and what is the response of others and then shift to the network because I also expect services like video streaming, gaming and even managing work from home with 5G to become easier and faster," said 24-year-old Rishabh Singh, a software engineer.
Experts also believe that telcos will try to target customers with digital content to showcase differentiation. Premium plans can be launched for high ARPU customers (Rs 1,000 per month and higher) for those willing to pay a premium for a 5G service which offers faster speeds and superior content.
“Customers would be willing to pay a premium of anywhere between 25 to 50 percent to experience faster data speeds and get a better user experience when they access content which needs high bandwidth and low latency. The premium they will be willing to pay is also dependent on the differentiation in terms of digital content which the Telcos offer,” added David.
From all this, we can infer that Indians are ready for 5G, whether it is by paying more for premium packages or by utilising more data at cheaper rates and faster speeds. ​
Note To Readers