AGR Highlights: The Supreme Court on Wednesday pulled up the Centre and telecom companies for doing self-assessment or reassessment of the Adjusted Gross Revenue (AGR) dues fixed by the apex court in its verdict given on October 24 last year. The top court, which was also anguished by frequently published newspaper articles on the AGR issue, said all Managing Directors of telecom companies will be personally responsible and will be held for contempt of court for any such future newspaper articles. A bench of Justices Arun Mishra, S A Nazeer and M R Shah refused to take up the Centre’s plea for allowing telecom companies to pay AGR dues in 20 years, saying the application will be taken up after two weeks.

Supreme Court in its AGR ruling, asks telecom companies to pay the dues as per court’s judgment 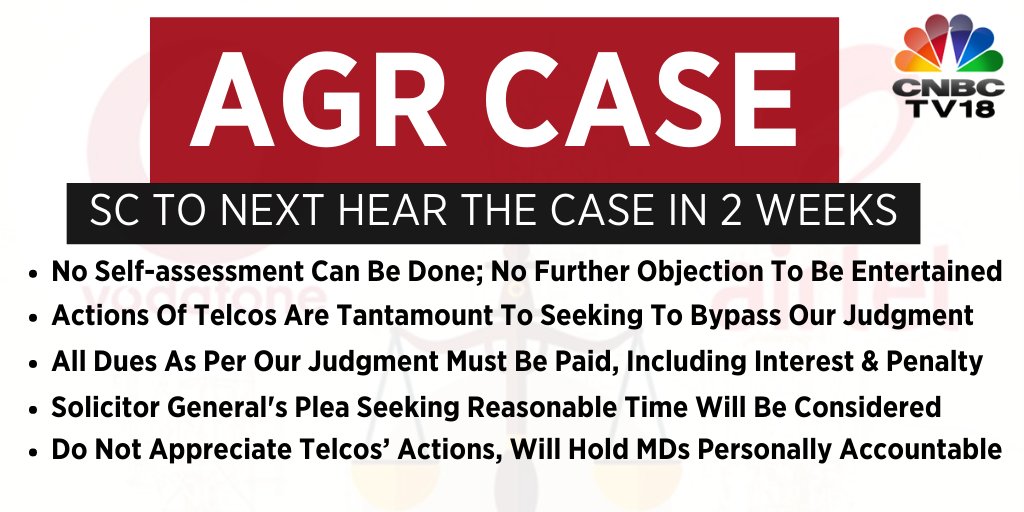 Kapil Sibal for Hughes telecom: Recovery may be frozen for time being

Senior advocate Kapil Sibal appearing for Hughes telecom requests that recovery may be frozen for time being and time for payment may be allowed in the manner the government is seeking.

SC is clear that AGR dues got to be paid: Former telecom commission member SS Sirohi

Former telecom commission member SS Sirohi said, “The judgment is absolutely in order and as far as AGR dues are concerned, which are long pending definitely supposed to pay. It’s a public money and it got to be paid and the government should recover it.”

“If the government wants to give relief, which will depend as per licence condition; not violating or modifying any condition that go on. Therefore, from present to future a lot of things can be done so that financial viability of the industry improves and people will start investing in the industry,” he added.

The Supreme Court will now next hear the AGR case after two weeks. The apex court will consider the plea filed by the Solicitor General seeking reasonable time.

When asked how things will proceed from here on, Rajiv Sharma of SBI CAP Securities replied, “I think this is not the best outcome for the sector and not even the best case outcome for Bharti Airtel because in our previous research we have been highlighting that Bharti needs Vodafone Idea for the tower company to be on the regulatory side. So there are various repercussions for Bharti as well. It looks like we are towards a duopoly and towards some long-term structural increase in tariffs as well but this self-assessment thing which has been mentioned by the court may have second order implications for many other court cases and this may not be a very positive outcome.”

SC: No further objection will be entertained

Supreme Court Order On #AGR Case | We are of the opinion that no self assessment can be done pic.twitter.com/5Xdpbcr882

Supreme Court observations: We cannot allow encroachment of SC judgment. If we will allow these pleas, SC will be party to fraud. We say with all responsibility that we cannot allow reopening.

Meanwhile, senior advocate Kapil Sibal asks "the court should not go back on the amount, only the manner of payment can be looked at."

SC observations: Will send MDs of telcos to jail, every company violating orders

Supreme Court observations: We won’t tolerate this, every company is violating orders and they want to hoodwink us. If required, we will summon MDs of telcos & send them to jail from here.

Speaking about AGR case, telecom consultant Sanjay Kapoor said, “This is the worst fear coming true and what the government had taken up as a plea over the last few days, there seem to be a ray of hope, but what the biggest court in the country says is law and you cannot do too much around it and given the situation of one of the operators it seem very difficult. How will they garner cash, a huge amount of cash to meet this obligation? If that doesn’t happen then duopoly is inevitable.”

#AGR Case | SC Observations: We won’t tolerate this, every company is violating orders and they want to hoodwink us. If required, we will summon MDs of telcos & send them to jail from here pic.twitter.com/S7m91cDgaA

Rohatgi says we are not seeking recomputation. However, Justice Arun Mishra says that there is no question of going back to the judgment, and that contempt has already been committed. Meanwhile, Dr AM Singhvi appearing for Bharti Airtel says that we (Bharti Airtel) have already paid Rs 18,000 crore, against 25,000 crore claimed.

Meanwhile, Vodafone Idea shares take a sharp knock, down 31 percent after the Supreme Court says no further objections to be allowed against payable dues by telcos.

Solicitor General: No reassessment of dues happening, only extension is sought

Solicitor General Tushar Mehta says there is no reassessment of dues happening, and that only extension of time is sought.

Do telcos feel they are more powerful than court, says Justice Mishra

Justice Mishra says this is a question of this Court's prestige: "Do (telecom) companies feel they are more powerful than court?"

Justice Arun Mishra asks Solicitor General Tushar Mehta (appearing for Dot) how the October 2019 judgment of the Supreme Court can be re-opened.

Supreme Court says our order is clear, no further objections to be allowed against payable dues.

#AGR Ruling | Supreme Court asks Solicitor General, where did the concept of self assessment come in? Who permitted self-assessment without permission of the court?

This is sheer contempt of court pic.twitter.com/4tLQABifq1

The government has received part payment of about Rs 25,900 crore from telecom operators towards statutory dues and has again directed telcos to make full payments, Parliament was informed on Wednesday.

"The Telecom Service Providers (TSPs) have made some payments in compliance with the Supreme Court order dated October 24, 2019," minister of state for communications Sanjay Dhotre said in a written reply to the Lok Sabha.

Vodafone Idea has said that it has cleared the principal amount towards AGR dues as it paid Rs 3,354 crore to the Department of Telecommunications (DoT) on Monday. The payment comes a day ahead of the Supreme Court's hearing on the issue of Adjusted Gross Revenue (AGR). In a regulatory filing, the telecom operator had earlier paid a sum of Rs 2,500 crore on February 17, 2020 and a further sum of Rs 1,000 crore on February 20 towards the AGR liability.

Not the first plea for modification of the AGR judgment

This is not the first time that a plea is being made for modification of the AGR judgment. In February, various telecom companies had moved SC seeking relaxation of the deadline and a court bid for negotiating with the DOT for working out a payment schedule. Far from granting any relief, Justice Arun Mishra led bench had come down severely on both, telecom companies and the government. Using unusually harsh language the bench had also hinted at possible quid pro quo and threatened to launch contempt proceedings for non-compliance with the judgment. However, what has changed now is that various telecom companies have made upfront payments, to varying degrees, till at least the extent of the principal amount that was due.

DoT bats for the telecom sector

Department of Telecom (DoT) has argued in its petition that the AGR judgment will have adverse implications for the telecom sector, possibly even pushing players into bankruptcy. The DoT argued that this will affect crores or customers, employment and investment. A possibly bankruptcy, the DOT reasoned, would also tie up precious spectrum in IBC proceedings. Moreover, the petition urged that given the exposure of the Indian banking system to the telcos, an adverse impact on the telecom sector would also translate into a domino effect on banks and financial institutions.

AGR case: Supreme Court to begin hearing at 10.30 am

The Supreme Court is all set to hear the contentious adjusted gross revenue (AGR) case at 10.30 am on Wednesday. A bench of the SC headed by Justice Arun Mishra will consider a plea by DOT. In a dramatic change of stance, the DOT is now batting for the telecom companies, seeking a 20 year payment window for telcos to discharge the AGR dues. With license fee dues alone stacking up to over Rs 92,000 crore, DOT is seeking for relaxation of the October 24 AGR judgment.