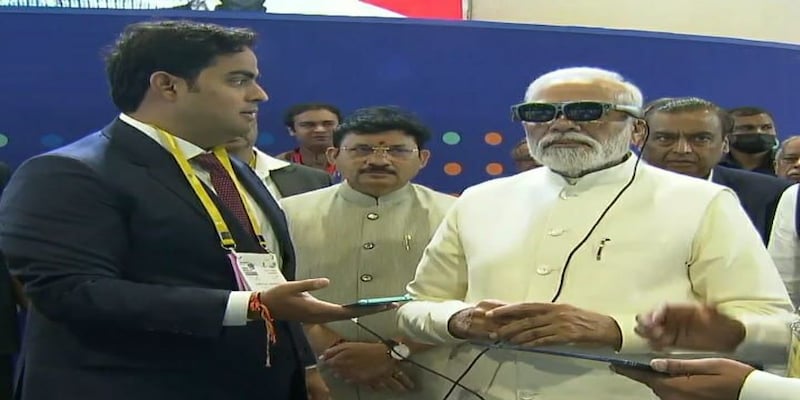 Prime Minister Narendra Modi is all set to launch the 5G services in India at the India Mobile Congress (IMC) 2022 in New Delhi shortly today.

Ahead of the launch, PM Modi visited the booths of each of the 5G players in the Indian market.
Accompanied by Reliance Industries Chairman Mukesh Ambani and Jio Chairman Akash Ambani, Modi first visited the Reliance Jio booth at the IMC, where Jio showcased its indigenous 5G technology. Jio has built India’s own indigenous 5G technology, a major step in the direction of the Prime Minister’s “AtmaNirbhar Bharat” agenda. This was followed by Bharti Enterprises CEO Sunil Bharti Mittal ushering the PM through the Airtel booth. He also visited Vodafone Idea's booth accompanied by Kumar Mangalam Birla.
Modi, who is expected to launch 5G services in select cities today, also tried driving a car in a game powered by 5G at the IMC event. Telecom expert Sanjay Kapoor believes the launch of 5G is only a beginning and the road from here to a destination where the customers applaud the experience and begin to benefit from the services of 5g is a very long one.

At the Ericsson booth, PM Modi drives a car virtually. The car is in Sweden.#5GLaunch #5GIndia #5G #PMModi @narendramodi pic.twitter.com/c3t8tdEk36

"This is something that 200 odd operators across the globe have been doing and now India joins the bandwagon. From here to reach a destination where customers begin to vouch for the services and begin to benefit from those services is a tough road. It is not an easy road for any economy," he told CNBC-TV18.
He added that all stakeholders need to synchronise their efforts, which will take a lot of money and resources and it will be time-consuming.
Earlier at Reliance Industries' annual general meeting (AGM), Chairman Mukesh Ambani announced that Jio plans to invest Rs 2 lakh crore for rapid rollout of 5G services.
Also Read | India 5G launches today: When will you, the customer, get it?
It will launch 5G across multiple key cities, including Delhi, Mumbai, Chennai, and Kolkata, by this Diwali and will complete full pan-India coverage by December 2023.

Bharti Airtel, on the other hand, announced in its June quarter earnings conference that the telco aims pan-India 5G coverage by 2024. Airtel also said that its SIM cards are 5G-enabled and would function flawlessly on 5G handsets.

However, Vodafone Idea is yet to announce its 5G roadmap.
Disclaimer: Network18, the parent company of CNBCTV18.com, is controlled by Independent Media Trust, of which Reliance Industries is the sole beneficiary.
Check out our in-depth Market Coverage, Business News & get real-time Stock Market Updates on CNBC-TV18. Also, Watch our channels CNBC-TV18, CNBC Awaaz and CNBC Bajar Live on-the-go!