Subhash Chandra-promoted Zee Entertainment Enterprises (Zee) and Kalanidhi Maran-owned Sun TV, two of the biggest broadcasters in the television space seems to be struggling with the growth of digital content. Though, both the players won’t be out of business in the near term, but there is an overhang on the growth of traditional media.

Across the globe, there is a huge demand and growth for over-the-top content (OTT). In India, global player such as Netflix and Amazon Prime are the leaders in video services, but domestic players like Hotstar, Voot, Zee5 and AltBalaji are also in the race.
Domestic broadcasters are betting big on the OTT content, but the major concerns that are drawing them behind include rising content cost and stiff competitions from the international players.
An analyst at Kotak Institutional Equities said growth trends in OTT and concerns related to rise in cost may hit the profitability of the companies and has cut the target PE multiples for broadcasting stocks.
Kotak has downgraded Zee to ‘reduce’ and cut target price to Rs 430 from Rs 600. For Sun TV, Kotak has maintained ‘reduce’ and cut target price to Rs 660 from Rs 925.
Will OTT Gives A Run For Traditional Media?
Analyst and industry experts are expecting more than 50 percent compound annual growth rate (CAGR) in OTT consumption in the next 5-6 years. The growth will be led by increasing number of people consuming OTT due to higher internet penetration, growth in consumption trends and change in the ecosystem.
As per the recent report by Boston Consulting Group (BCG), revenues from OTT content has seen a CAGR of 40 percent plus for the period 2005-2017 and is expected to see a growth of 20 percent plus in the period 2017-2023.
Globally, OTT space is growing and the US and Canada are dominating the market. Around 16 percent of the Indian media consumption is now through the digital and the percentage goes higher to 25 percent in the case of millennials.
However, consumption of traditional media did not decline substantially. As per the BCG report, internet users have spent 1.6 hours per day in 2017 on television against 1.5 hours per day in 2016.
Further, domestic broadcasters are launching their own OTP apps and cable/DTH players are coming out with different models to stay ahead in the OTT race. In fact, telecom companies like Airtel and Reliance Jio have started to aggregate content.
Zee Vs Sun TV
Stocks of Zee and Sun TV have fallen in the recent times on various concerns.  Zee’s stock fell almost by 34 percent from 52 week low levels at Rs 619 and hit a 52 week low at Rs 410 in October, 2018. However, the stock shows an upside rally of 20 percent post the announcement on getting a global strategic partner. On the other hand, Sun TV continue to trade near 52 week low levels and saw a fall of almost 46 percent from the start of 2018. 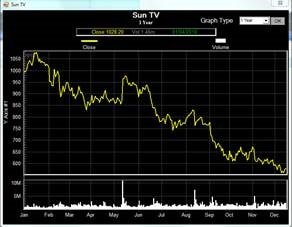 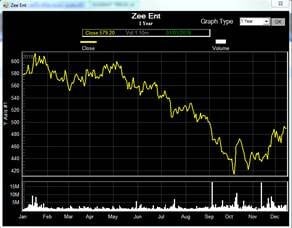 Zee Stock Gained 20% Post The Stake Sale Announcement
On November 13, 2018, Zee had said that its promoter intends to sell up to 50 percent of their equity stake in the company to a strategic partner. The motive of stake dilution was to pursue disruptive technological development and transform the business into a tech-media company.
This came as a positive news flow and stock price bounced almost 20 percent from 52-week low levels till now. Promoters of Zee remained positive on the move as they intended to focus more on technological driven media company from a content-driven company. This shows a strong picture of OTT space growing with double speed, when compared with traditional media where growth remains at the same levels.
Zee’s OTT app, ZEE5, is already fall under the list of top 5 OTT apps in India and the company is planning to spend more on content and expect the content cost to rise in coming quarters to remain ahead in the curve of OTT.
Sun TV Behind Competition
The shares of Sun TV stock remained underperformed in FY18 on two major concerns. First, the company is losing its market share in Tamil Nadu due to under investment in the OTT space. Sun TV has its OTT App called as SUN NXT. Second, over the past two years, Sun’s viewership has fallen from 65 percent to 46-47 percent and hit the lowest in the last week of November 2018 to 38 percent. Star and Zee continued to gain Tamil Nadu market.
On OTT front, Chennai-based company seems to be lagging behind when compared to other domestic players. Comparing domestic players in the Indian OTT market, SUN NXT is at the bottom in terms of monthly average users or daily average users.
For Zee, higher content cost may dent the margins of the company, but management in their earnings call guided to maintain margins at least above 30 percent. So the big question is, going ahead, can Zee and Sun TV sustain revenue growth and margins? The Zee stock has traded at price to earnings of 21 times FY20E, while Sun TV traded at 15 times FY20E.
The digital player, who remains ahead in the technological race will be the next preferred choice for the users. The whole new digital ecosystem is evolving, consumer choices are changing day by day, rising competition and discretionary incomes of individuals will definitively help in the development of OTT space. Companies are required to remain flexible and also need to adapt the changes as soon as possible to sustain and grow in this challenging new world of technology.
Check out our in-depth Market Coverage, Business News & get real-time Stock Market Updates on CNBC-TV18. Also, Watch our channels CNBC-TV18, CNBC Awaaz and CNBC Bajar Live on-the-go!