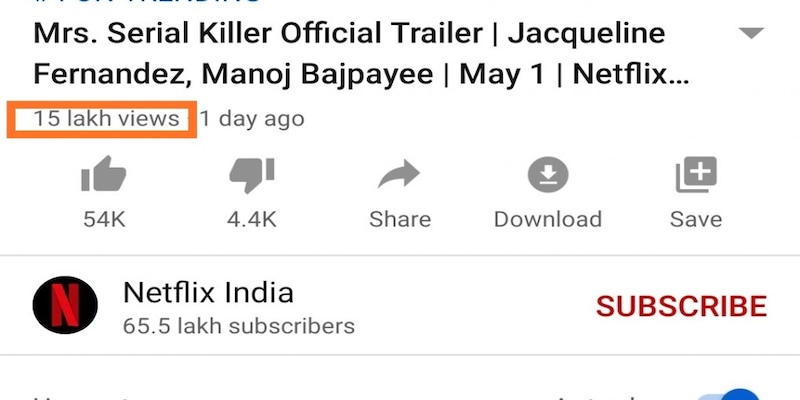 YouTube has quietly changed the number system for views for its Indian users to lakh and crore, from hundred thousand and million.

Indian users today, and in some cases over the past few days, have woken up to a small but important change in the way YouTube displays views on a page.

The Google-owned video giant now displays views in lakh and crore, as opposed to the previous million (and hundred thousand, typically shortened to k) format.
The change is currently visible only on the Android app but will likely make it soon to other platforms. The company has not commented on the change.
In the numbering system that most Indians are comfortable with, a lakh stands for hundred thousand while a crore means 10 million. (3 lakh is  abbreviated as 300k.)
But YouTube's small but important change is the latest in the service's efforts to make it more attuned to local tastes.
In countries like Japan, YouTube reportedly displays units in that country's numeral system.
As many as 1.3 billion, or 130 crore, people worldwide use YouTube everyday.
The lakh-and-crore traditional number system in India leads to an interesting dilemma for all services that communicate to the public, be it video services like YouTube, advertisers or the news media.
This even as an increasing number of Indians have become increasingly comfortable with the million-and-billion usage that is pervasive the world over.
The CNBCTV18.com style sheet dictates that all numbers be represented in million and billion units (unless they represent rupees, in which case they are put in lakh and crore).
Listed companies in India, which used to declare their financial statements in lakh and crore, have mostly all adapted the million usage though sites like BSE display the option for users to quickly switch between lakh and million and so on.
Still, many Indians aren't amused by YouTube's latest 'localisation' efforts, not least because the app seemingly doesn't offer the user the option to set their own preference.
Many have taken to Twitter and  Google's support forum to voice their views on the change.
Check out our in-depth Market Coverage, Business News & get real-time Stock Market Updates on CNBC-TV18. Also, Watch our channels CNBC-TV18, CNBC Awaaz and CNBC Bajar Live on-the-go!