Updated : January 18, 2020 12:43 PM IST
The screen of V17 Pro is impressive with its rich colour output, deep blacks, and sleek bezels.
In terms of specifications, the V17 is powered by a Snapdragon 675 processor and comes in a single variant of 8GB RAM with 128GB storage.
Vivo phones are known for great selfies and the V17 lives up to the expectation. 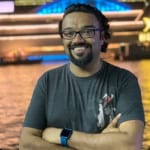 Chinese smartphone maker Vivo has enjoyed fantastic growth in 2019 on the back of its entry-level and mid-range smartphone portfolio. In the premium range, they launched the V17 Pro which was the world’s first 32MP dual pop-up selfie camera. The next phone in this range is the Vivo V17 which is the company’s first smartphone with a hole-punch camera.

The hole-punch camera is not exactly a new technology; we saw it first on the flagship Samsung S10 series and were later available in the mid-price segment from various brands including Samsung, Moto and Honor. However, what makes the Vivo V17 hole-punch camera stand out is that it’s amongst the smallest size camera hole in the mid-range segment. While on one hand, we liked the punch hole design and the smart user interface adjustment that Vivo did for it, it does hinder in content consumption. If you are watching a video or playing a game, the camera hole does hinder you from getting an immersive experience. Vivo calls this new style of the screen as the iView Display and it's a Super AMOLED panel with FHD+ resolution. The screen is impressive with its rich colour output, deep blacks, and sleek bezels. We also appreciate the fact that the phone comes with a pre-applied screen protector.

Vivo V17's screen is impressive with its rich colour output, deep blacks, and sleek bezels. We also appreciate the fact that the phone comes with a pre-applied screen protector.

Design is another area where the V17 feels great. We liked its sleek design with rounded corners and the overall hand feel of the phone. While it's a plastic body, the glossy finish gives it a premium look. Trouble is the glossy finish is also prone to scratches and smudges - thankfully Vivo includes a transparent case in the box. Keep in mind that the camera module protrudes out a bit which makes the phone uneven when placed on a flat surface. The volume and power button are placed on the right side while the sim slot is on the left. At the bottom is a 3.5mm jack and USB Type-c port along with the speaker. At 176 grams, the phone's weight complements its sleek design in our opinion.

In terms of specifications, the V17 is powered by a Snapdragon 675 processor and comes in a single variant of 8GB RAM with 128GB storage. It does seem odd that at Rs 23,000, the V17 uses the same processor that powers the Vivo U20 which comes half its price - it would have been better if there was a better processor given at this price point. Performance-wise we saw no issue with the phone for day to day usage. Thanks to the 8GB RAM, we were able to smoothly multitask even with over 25 apps running in the background. PUBG ran at high graphics setting smoothly and so did COD Mobile. We were pleasantly surprised to see the large 4,500mAh battery despite the sleek design and it regularly lasted close to a day and a half. The phone supports dual engine fast charging and Vivo includes an 18W charger in the box which sweetens the overall value. In terms of specifications, the V17 is powered by a Snapdragon 675 processor and comes in a single variant of 8GB RAM with 128GB storage.

Cameras are the other highlight of the V17. It has a 48MP quad rear camera setup and a front 32MP shooter. The rear camera consists of a 48MP primary sensor, 8MP wide-angle lens, 2MP macro lens, and 2MP bokeh lens. Image quality from the rear camera is great in daylight and we were particularly impressed with the edge detection in bokeh shots. By default, the camera shoots at 12MP resolution but you can shoot in 48MP resolution via a dedicated shoot mode. The macro mode also works great and captured a good amount of details but it’s a shame that it shoots only at 2MP resolution. Video recording is supported in up to 4k resolution and Vivo’s ultra-stable video tech manages to not only take care of shaky hands but also handled a bumpy rickshaw ride very well to deliver a surprising stable video.

On the front is a 32MP selfie shooter with HDR support. Vivo phones are known for great selfies and the V17 lives up to the expectation. We got fantastic clicks with good details and rich colours in daylight. Keep in mind that the camera shoots at 32MP resolution by default which means most photos are 6.5MB on an average. However, in low light, the images suffer from soft details – they are bright enough to make things visible, but you can make out the lack of sharpness. We also had an issue with the portrait mode shots – the camera failed to deliver the bokeh effect in photos. Vivo’s stand out feature on the V17 is the Super night mode which is available for both rear and front camera. The camera AI automatically detects the scenario and recommends if you should use the super night mode or not which helps in getting the best possible results. It works best indoors for places such as pubs and parties but when shooting landscape in low-light, it didn’t help much. We hope Vivo fixes these camera issues via OTP update soon. That being said, we believe that the cameras on the V17 will prove to be good enough for most users.

Vivo phones are known for great selfies and the V17 lives up to the expectation.

The V17 comes with Vivo’s Funtouch OS v9.2 based on Android 9.0. It continues with a no app drawer interface that shows notification panel on swipe down and a control centre on swipe up – this is something that might take some getting used to if you are switching from a non-Vivo phone. We liked the fact that the interface is loaded with a plethora of handy features including ultra game mode, motorbike mode, digital wellbeing, parental controls, always-on display along with dynamic effects and theme store. The interface is fluid to operate and we did not face any hanging issues. The only complaint we have is for the pre-loaded bloatware apps and the fact that it still not updated to Android 10.

At its asking price, the Vivo V17 makes a compelling case for an all-rounder stylish smartphone. Trouble is that with the current aggressive competition, the Vivo V17 feels a bit lacking. You can get the Redmi K20 at Rs 19,999 which gives you a slightly better-looking device with a more powerful Snapdragon 730 processor, 20MP pop-up selfie camera, 128GB storage albeit with 6GB RAM. However, when you look at the competition, the V17.