Big Tech Tumble: Why giants like Apple, Microsoft, Google are having a rough year

Big Tech Tumble: Why giants like Apple, Microsoft, Google are having a rough year The main problem is lumping all these Big Tech companies into one category as 'tech,' when the products or services they provide are vastly different. It is the same mistake that got these stocks to be enormously overvalued in the first place, making the current correction warranted. In the absence of nuance, the same mistake is possible on the downside as well.

'Tis the season for quarterly earnings reports, and Big Tech companies have been among the poorer performers — Google's parent company Alphabet Inc reported a steep decline in net profit, while social media giant Meta's advertising revenue dipped by around $1 billion. Microsoft expects a slowdown, and Apple, which announced its earnings on Thursday (October 27), reported a 33 percent year-on-year drop in iPhone sales.

Meta, Amazon, Microsoft, Alphabet, Apple, Snap, Intel and AMD have already lost a combined market value of nearly $3.6 trillion so far this year, and shed around $409 billion on Thursday.
Devang Bhatt, an IT analyst with IDBI Capital, said the results were below expectations, and suggested that Indian investors who are looking to invest in these tech stocks opt for systematic investment plans (SIPs). A more cautious approach, Bhatt said, would be to evaluate the companies' growth in revenue over a period of time and their business model — their unique value proposition compared to their competitors. "At the end of the day, nobody can beat Google's business model, or Amazon's business model, or Apple's business model," he told CNBC-TV18.com.
That said, Bhatt cautioned that while these might be considered safe bets, many Big Tech companies are facing antitrust inquiries in the US, EU, and India. "There is talk of breaking them up as they have become monopolistic. so that is the one big risk factor," Bhatt added.
While it is easy for doomsday prophets to usher in the end of days for Big Tech, there is a need for a more nuanced look at things. Bhatt said rising costs and the global economic slowdown have contributed to the shifting of gears — from top to first or second.
Meanwhile, a look at the Top 10 US equity mutual funds, in descending order of assets under management (AUM), shows that none of them have registered any growth in the past year.
As The New York Times puts it, these companies are facing the same issues as other businesses — they received a massive leg-up from aggressive consumer spending during the pandemic and believed that the demand would continue and invested accordingly. But now that things have come back to normal, consumers have rationalised their spending, and Big Tech is faced with the prospect of adjusting.
Here's where Big Tech companies stoodd at the close of Thursday's trading in the US:
One look at the table above brings to the fore a fundamental problem — lumping all these companies into one category as 'tech', when the products or services they provide are vastly different. It is the same mistake that got these stocks to be enormously overvalued in the first place, making the current correction warranted. In the absence of nuance, the same mistake is possible on the downside as well.
For instance, Microsoft and Apple are both global technology giants, but one provides software services across sectors, while the other primarily makes hardware — iPhones, iPad, et al. Any software or services it provides are incidental and heavily tied to its hardware.
Also read: Meta plummets 25%; Zuckerberg plea for ‘patience’ falls flat
Google and Facebook too are pitted against each other as both companies derive a part of their revenue from advertisements, but the disparity is huge — Google's latest reported ad revenue ($39.5 billion) is 57 percent of its total revenue ($69.1 billion), while Meta's ad revenue ($27.2 billion) is not only less 31 percent less than that of Google's, but accounts for a whopping 98 percent of Meta's total revenue. So, hypothetically speaking, if ad revenues were to become obsolete tomorrow, it will be easier for Google to recover than Meta. And in its earnings call, Meta warned that it doesn't see any immediate change in fortune for its ad business.
Alphabet CEO Sundar Pichai, in an earnings call, acknowledged the shortfall in ad revenue and vowed to take several corrective steps, including increased focus on products that improve search through artificial intelligence and to scale back hiring and other operating expenses.
“There is no question we are operating in an uncertain environment,” Alphabet Chief Business Officer Philipp Schindler said on the call, conceding that the pullback in ad spending deepened during the third quarter 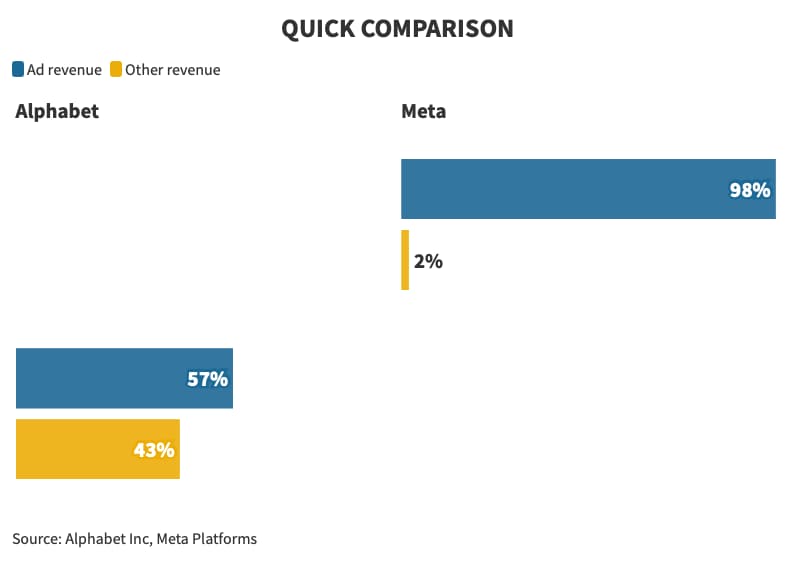 Ed Yardeni, President, Yardeni Research, feels all of this is, in fact, a healthy development. "Money is leaving large tech companies and moving to some of the more traditional Dow Jones members. So that is an encouraging development — we are seeing money just shift around to the other end of the market place," he said.
Wall Street seems better placed at differentiating between social media platforms Snap and Twitter, as the numbers show. Since Elon Musk announced his takeover bid towards the end of April and then backed out, Twitter's value fell 24.7 percent from $34.36 billion to $28.13 billion on July 9, before recovering to the current $41.09 billion, registering a net growth of 9.9 percent with Musk finally at its helm.
In the same period, Snap, which had a higher market capitalisation of $48.34 billion, continued to dive due to falling ad revenue — down over 49 percent to $24.55 billion by July 9 and a net decline of 68.4 percent to $15.42 billion right now.
The only like-for-like comparison is Intel vs AMD, as both companies produce chipsets for computing and graphics processing. In September, Nasdaq, in its official website, said analysts were positive on AMD and mixed on Intel. "While AMD is busy expanding its market share, Intel has been struggling to launch its latest chips in the high-potential server market," Nasdaq said, adding, "AMD stock is better than Intel stock in several ways." And yet, there's very little difference in how much both stocks have fallen this year. 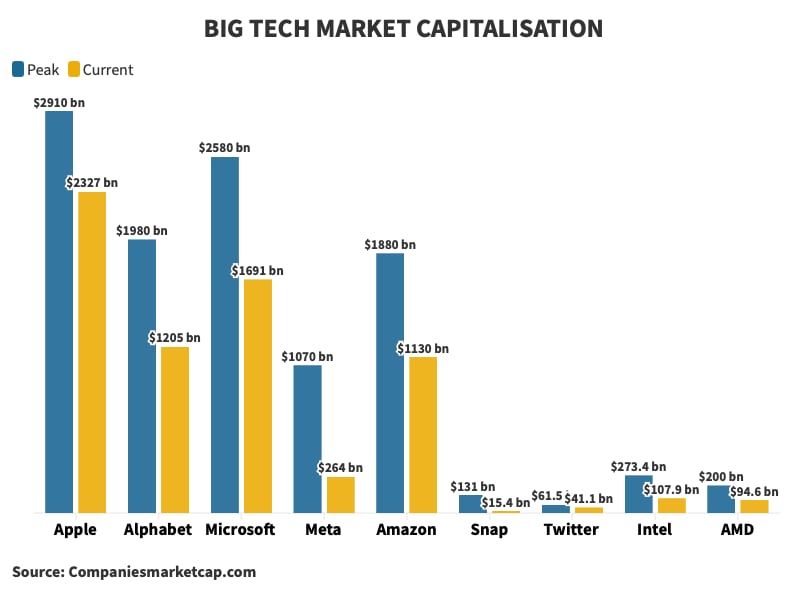 As a columnist argues in a Financial Times op-ed titled 'Growth is mostly impossible to predict, and how you value companies is mostly wrong,' key factors like cash flow and margins must be taken into account, as growth is "very short-lived". Going into a recession, the target demographic for each company also plays a key role as purchasing power differs from one segment to another. Considering most of these companies are multinationals, their strategy for key export markets too would make a difference.
Also read: Intel confirms workforce reduction, cuts guidance for the year amid demand slowdown
(Edited by : Shoma Bhattacharjee)
Check out our in-depth Market Coverage, Business News & get real-time Stock Market Updates on CNBC-TV18. Also, Watch our channels CNBC-TV18, CNBC Awaaz and CNBC Bajar Live on-the-go!