OTT giant Netflix and NFT platform Candy Digital joined hands to create a series of digital collectables dedicated to Season 4 of Stranger Things. The game is quite simple - one has to decode clues, solve puzzles, and overcome challenges sourced from the TV show.

On June 2, 2022, OTT giant Netflix and NFT platform Candy Digital joined hands to create a series of digital collectables dedicated to Season 4 of Stranger Things. The collection comprises 11,111 NFTs, each of which is a digital poster of a character from the hit series.

To go with the NFT collection, Candy Digital also created a game set in the Stranger Things universe. The mini-game is built on the Palm blockchain, an Ethereum layer-2 solution by Candy Digital.
The game is quite simple - one has to decode clues, solve puzzles, and overcome challenges sourced from the TV show. By participating, fans stand a chance to win NFTs from the collection. There is a new NFT up for grabs with every round. Until now, about 4,700 players have won free NFTs of a character called Eleven – the lead actor in the series.
Also Read:
English Premier League files trademarks for crypto and NFTs – all you need to know
This week, the mini-game came out with another round of puzzles called ‘I am Hell’s Master.’ Upon successfully solving the puzzle, players can win NFTs based on Mike Wheeler, Jonathan Byers, Will Byers, or Argyle.
However, this is the first time Candy Digital has come out with NFTs that have nothing to do with sports. And it seems enthusiasts are not exactly pleased with the entire project. One fan who was trying to play the game kept getting logged out and took to Twitter to vent his frustration.

Even the NFTs haven't garnered much interest. One user replied to the launch tweet by saying, "You think we care about NFTs?". His tweet was accompanied by a GIF of a man firing a gun – clearly indicating the user's sentiments towards the launch announcement. 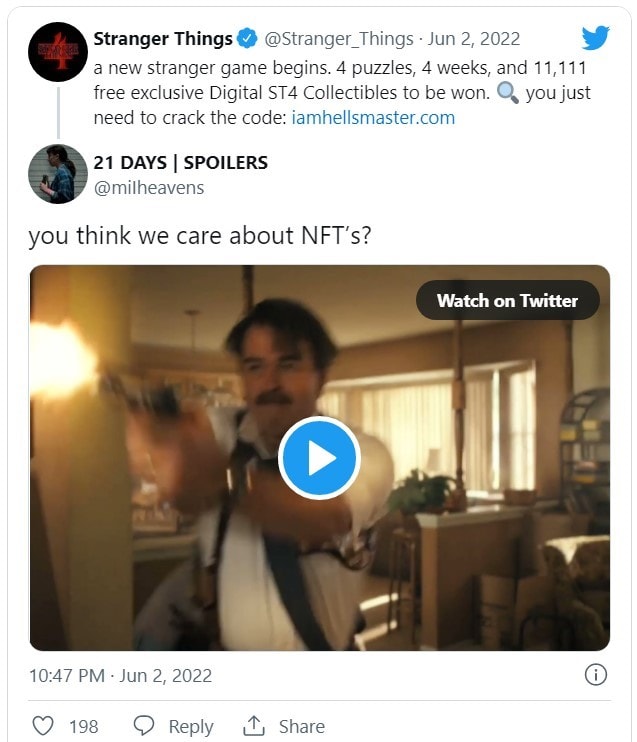 .
Just the idea of Netflix getting involved in a play-to-earn game for NFTs is stirring up reactions on the internet. Another user lashed out on Twitter, saying, “I deeply love Stranger Things, but I’m profoundly disappointed that Netflix decided it’d be a good idea to run an NFT grift on its fans. I’m not going anywhere near this trash." 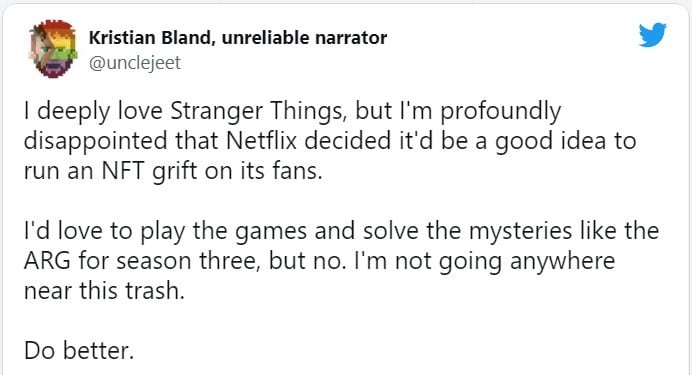 It is not the first time that Netflix has released show-based NFTs. On May 24, 2022, Netflix did something similar with the sci-fi series Love, Death + Robots. It scattered 9 QR codes all over its social media platforms and physical billboards and asked users to unearth them.
Also Read: Why is Ethereum so popular for NFT projects?
Each code led the user to an NFT featuring a unique image from the third volume of the show. It even allowed users to choose between minting the NFT by paying just the gas fees and saving it as an image with a right-click.
Referring to the entire salvo, a Stranger Things fan tweeted, “I am once again asking Netflix to STOP making NFTs of my favourite shows. I can’t handle the grief.” Many more aggressive reactions have followed on Twitter, some calling the NFT collection “bullshit”, while others responded with crying and puking emojis.
The exact reason for the hate is not known. However, a certain amount of backlash is always expected in the NFT gaming space. In some cases, negative user reactions have even led to games being withdrawn altogether. This is not to say that the Stranger Things NFT collection is lacking in any department – several users tweeted their completed puzzles from the game and even voiced their satisfaction.
Check out our in-depth Market Coverage, Business News & get real-time Stock Market Updates on CNBC-TV18. Also, Watch our channels CNBC-TV18, CNBC Awaaz and CNBC Bajar Live on-the-go!