When Samsung launched the original Galaxy Fold, its team asked me if I wanted to check out the phone for a couple of days. I refused -- my usual review period is about a week and they were offering it for two days at max. I didn't write about it. It was a complicated situation.

Samsung had announced it and then handed the phone to US tech reviewers who all broke their screens. Samsung had to delay the device by six months and come up with tweaks. At the same time, these tweaks were just tweaks to what was a very fragile first-generation product that was more expensive than the 512GB iPhone 11 Pro Max. 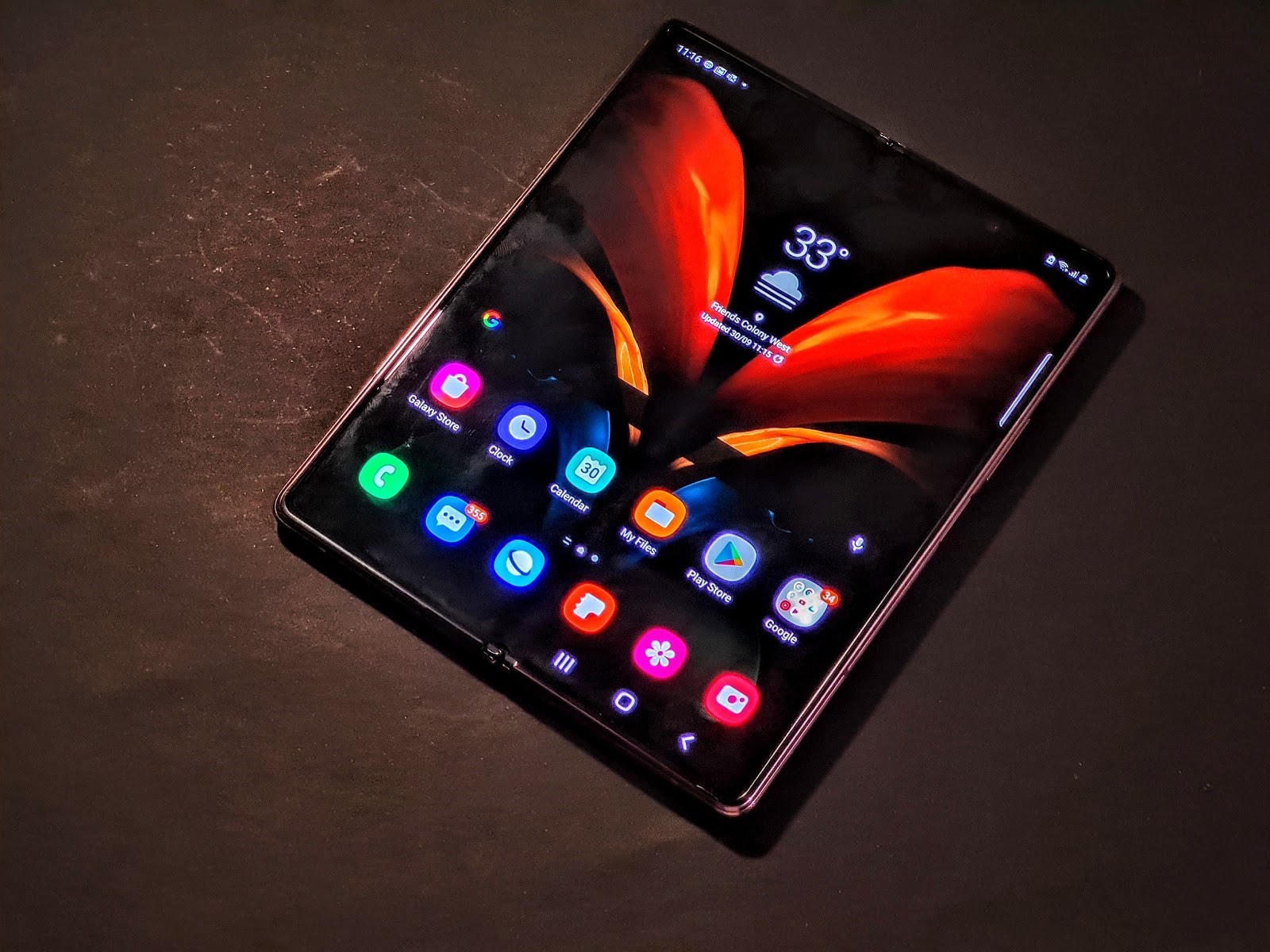 A year later, Samsung contacted me for reviewing the Galaxy Z Fold 2, they again offered it for two days and I refused again -- only for them to come around and offer it for five days. So I agreed. It came with the knowledge of knowing a couple of fold owners in my friend circle. I have seen all the reviews of the Fold 2 online from US-based reviewers and managed to test the Galaxy Z Flip, which used a screen similar to that of the Fold 2.
In my five days with the Galaxy Z Fold 2, I must admit that I'm impressed, yet I believe this is not a phone for everyone. The concept of the folding phone is not fully fleshed out in software and hardware. Hardware-wise, Samsung has done well and come close -- but durability for a phone that's so expensive remains a concern. Software is a different issue altogether something Samsung can't resolve on its own.
But let's look at the hardware where Samsung has made a prodigious leap. The leap isn't just qualitative but also quantitative. Samsung takes inspiration from the design language of the Galaxy Note 20 Ultra and repurposes it for the Fold 2. It uses the same hinge mechanism that it pioneered for the Z Flip and implements it to a larger device.
The hinge is never unhinged and never lets any damage-inducing particles seep through. The rear side of the phone is made of plastic and glass. Surprisingly, the plastic is on the outer display which is edge to edge diagonally at 6.2-inches in Samsung's glorious OLED avatar. The other side is made out of glass, Gorilla Glass alongside being home to 3 cameras that have a 12-megapixel resolution, but different focal lengths. Even the outer screen has a camera which is of the hole-punch kind centered at a resolution of 10-megapixels. 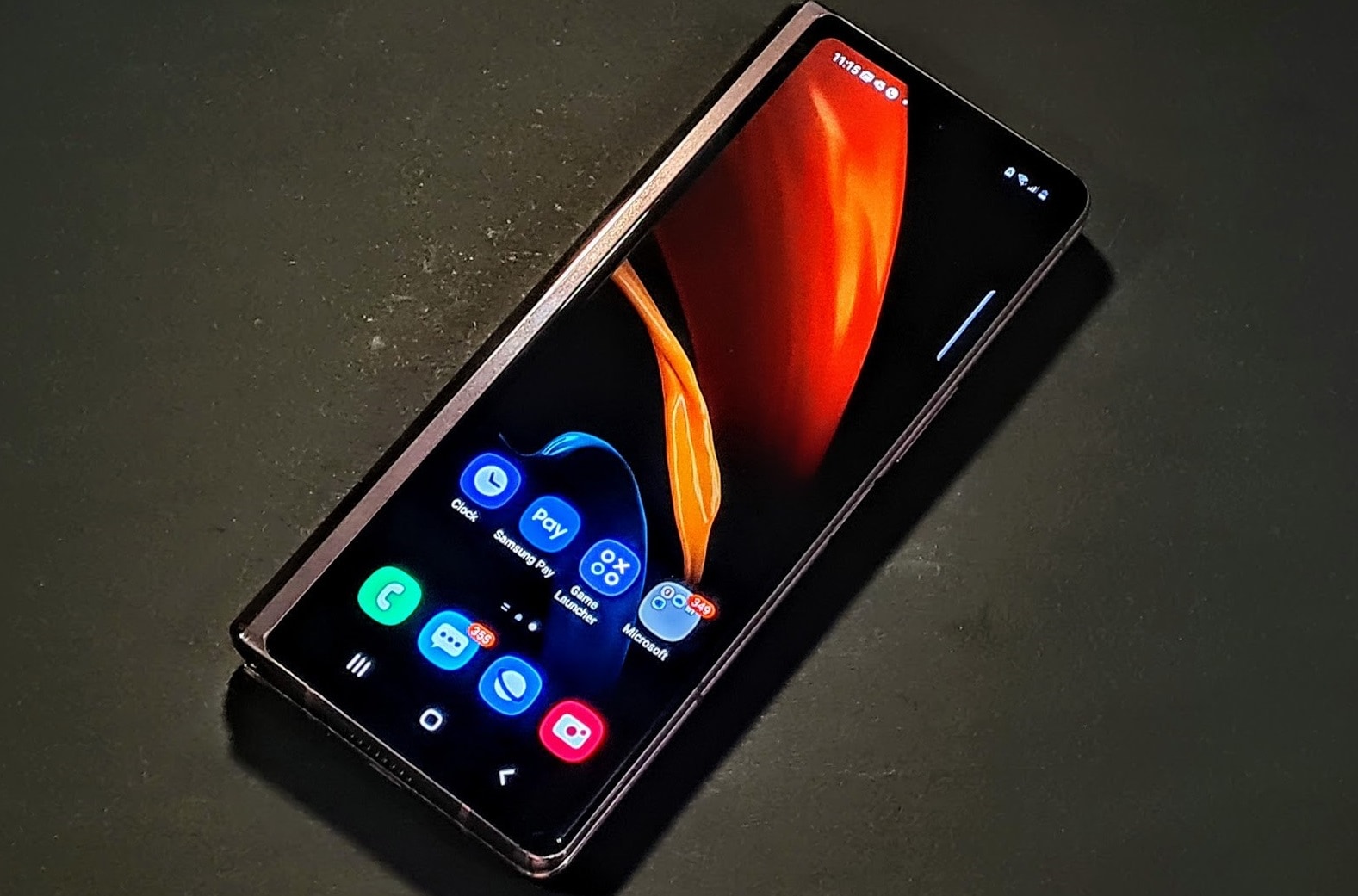 But the real fun starts when you unfold the phone. You get graced by a 7.6-inch OLED screen that is square with one tiny notch for another 10-megapixel camera for selfies. Mind you this is a folding screen which is the first of its kind to have a 120Hz refresh rate. It looks glorious. That being said the crease is distinctly visible.
Imagine, this is a size which is larger than Samsung's first tablet -- the Galaxy Tab which had a 7-inch screen. Websites almost look like newspapers especially when you view them in their desktop view. You can have three apps running at the same time on the same screen. This could be a web browser, YouTube and WhatsApp which makes it incredible for productivity.
If you’re a writer like I am, this is great. Samsung's stock keyboard allows you to thumb type with two hands by splitting the keyboard into two. That takes some getting used to but it can work for some. I preferred using the SwiftKey keyboard and I typed on it like the way I would on an iPad Mini. Imagine, I managed to type this review on Google Docs faster and while on the go on the Galaxy Fold. And mind you, Google Docs is far from being optimised for this form factor. But still, it works.
The big headline is that there is a legitimate use case for foldable-screen phones. They make everything better. As of now, there is no real way to quantify it, but it sure feels more fun. When you add top tier specs like the Qualcomm Snapdragon 865 processor and 12GB RAM -- things one doesn't get on the Galaxy Note or Galaxy S20 line of smartphones, then you know, this is Samsung's most ambitious phone. Think of it as a Rolls Royce meeting a Ferrari.
Samsung has worked with partners like Microsoft to provide some meaningful experiences with some of its apps which makes things great for productivity. I also liked the external screen’s long vertical nature because it was comfortable for making calls, and for because of its narrow width, it also made for easy one-handed typing especially with messaging apps. Sure, it is not the way for one to hammer out an article such as this or read long text via the web browser but for somethings it is great.

Interestingly, even though the cameras on this phone aren’t as sophisticated as the Galaxy Note 20 and Galaxy S20 series, I found them to perform better and more reliably. I suspect that’s got something to do with Samsung actually getting a handle on the optical hardware and also benefiting the superior image processing provided by the Qualcomm chip as opposed to the anaemic computation churned out by Samsung’s Exynos chip. In fact, the pictures during night time rivalled the Google Pixel 3 which I found to be very pleasing.
In fact, the benefits of the Qualcomm chip could be found across the board. This phone felt faster than both the Galaxy Note 20 Ultra and the S20 Ultra and despite having just 4,500mAh battery and those massive screens, it provided better battery life than those two phones.
Anyone having any concerns about battery life shouldn’t worry in the short term as this phone would give around 7 hours of screen on time and 13 hours of use on a single charge. That is an exceptional battery life for the type of phone this is. Samsung managed to cram in this battery in a 6.9-inch frame but when folded, it becomes a hulking 16.8mm. That’s just slightly thicker than the Nokia 9300 communicator which was at 21mm. Samsung just couldn’t add a bigger battery and till it is able to miniaturise this concept further -- it will not be able to go further. In light of that, it is fantastic they have achieved this.
Another noteworthy thing about this phone is the speakers -- they are loud and clear -- tuned by AKG, but really a lot of fun.
All of this, of course, comes at a cost. A cool Rs 1,50,000 which is by the way lesser than the original Fold. But still, that’s a lot of money considering the pandemic and the economic downturn. Though it’s visual panache and functional nuance is meant for someone rich whose work is ticking along just fine. But the reason that I worry is that it still has quite a fragile screen, and still doesn’t have IP water and dust resistance. Since I haven’t even tested it fully for a week, I leave feeling uneasy recommending this to a person, especially after what all I’ve seen happen to the Galaxy Fold in my friend circle. It ain’t pretty or cheap!
But all things considered, this is certainly a worthier attempt at the Foldable phone that also gives a glimpse of the immediate future right now. And that certainly is worth Rs 1,50,000 considering the lack of compromises one has to make to own this phone. Well done, Samsung, indeed second time is a charm.
Check out our in-depth Market Coverage, Business News & get real-time Stock Market Updates on CNBC-TV18. Also, Watch our channels CNBC-TV18, CNBC Awaaz and CNBC Bajar Live on-the-go!