Updated : February 24, 2020 01:39 PM IST
Adult content, foul language and anti-national ideology are some areas where Indians do not agree with the online curated content.
Out of the concerned, most (25 percent) are worried about the fact that adult content is easily accessible to children.
As many as 63 percent of respondents feel that some kind of censorship or at least a code of conduct approved by the government is the need of the hour.

Over-the-Top (OTT) video streaming platforms have risen exponentially in the last few years. However, a five-poll survey done by LocalCircles, with more than 40,000 responses, has now found that the majority have concerns with these platforms such as Netflix, Hotstar, Amazon Prime, etc. Given the varied objections, the key question was censorship. Is it needed on these platforms? As many as 63 percent of respondents feel that some kind of censorship or at least a code of conduct approved by the government is the need of the hour. The Internet and Mobile Association of India (IAMAI) has released its second online curated content provider code in which it has committed to setting up a body called the Digital Curated Content Complaints Council (DCCCC) which has not been resolved at the Digital Content Complaint Forum.

Consumers, however, have expressed that they have limited confidence in industry bodies being able to serve as the regulator of inappropriate content. According to some citizens, that is precisely why a censor board exists in the country and the Indian film industry doesn’t regulate itself. As on date most of the OTT platforms like Hotstar, Netflix, Jio, Voot and SonyLIV haven’t signed this new code of IAMAI either.

The other questions in the survey, spell good news for the streaming services. When respondents were asked if they watch shows/movies using Netflix, Amazon Prime, Hotstar or any other OTT platform, as many as 47 percent replied in positive.

Up to 33 percent of respondents have a subscription for three or more OTT platforms, 25 percent have paid up for two while 42 percent use one.

In response to being asked what is the primary reason for using these OTT platforms, 53 percent said these services let them watch content as per their convenience. Surprisingly, only 9 percent gave the high quality of content as a reason, while interestingly another 9 percent said the uncensored content was a draw for them. 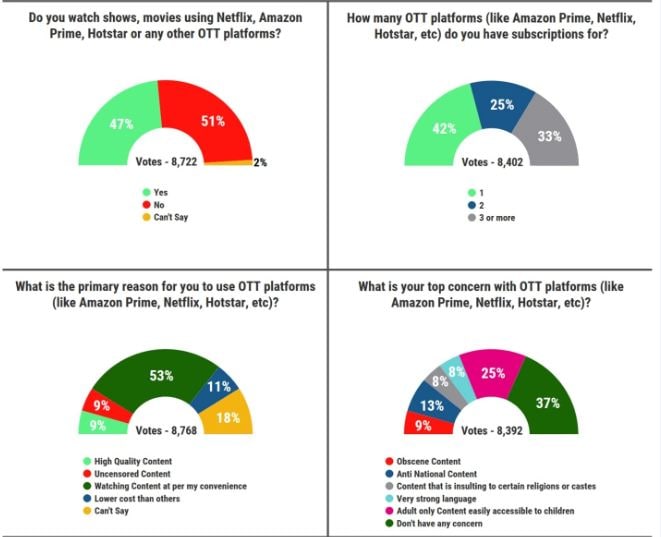