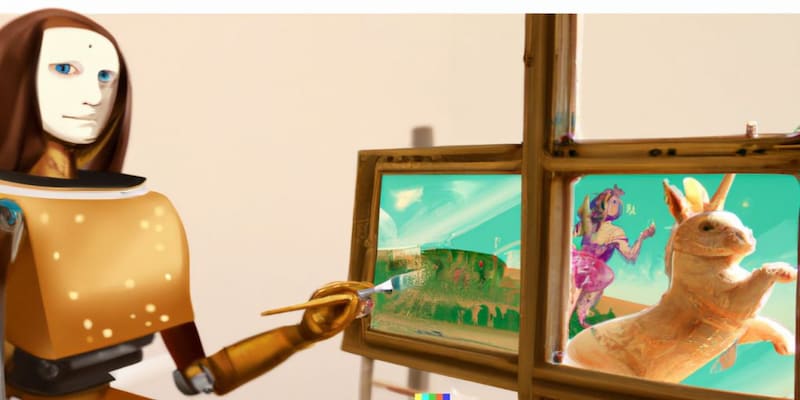 AI text-to-speech art generator DALL-E can create anything you want it to and can build on that with its Inpainting and Outpainting features but it also has certain limitations.

OpenAI finally dropped its waitlist and opened the DALL-E beta for users. All you have to do is sign up and start prompting the AI to work its magic.

“More than 1.5 million users are now actively creating over two million images a day with DALL-E — from artists and creative directors to authors and architects — with over 100,000 users sharing their creations and feedback in our Discord community,” OpenAI said in an announcement on Wednesday.
To catch you up to speed, OpenAI unveiled the original DALL-E in January 2021. It is an AI art generator with the ability to turn any text description (or prompt) into unique images in varying art forms from real-looking photographs to crayon drawings that look like they were made by a three-year-old.
Also Read: This company claims its AI tool can help you become a better writer
While DALL-E has been around for over a year now, this is the first time that anybody and everybody can go onto the website, sign up and start generating images as per their liking. I have been on the waitlist for as long as I can remember and last night was the first time that I could actually create images from my own inputs. There is nothing that this tool cannot do, it has generated close-to-perfect images of all my descriptions from an Indian girl marrying a Spanish man in space to a drunk Mona Lisa.
DALL-E was also responsible for “World’s first artificially intelligent magazine cover” which it “designed” for Cosmopolitan in June earlier this year, post which the company released its beta version with pricing for the public and onboarded over one million users.
But with great power… well, you know how the saying goes.
DALL-E can generate anything you want it to and can build on that with its Inpainting and Outpainting features but it also has certain limitations.
Also Read: This is how Google says it is making Search "more natural and intuitive"
According to The Verge, “Experts note that the ability of text-to-image systems to produce nonconsensual nudes and photorealistic images is potentially damaging — fodder for harassment, propaganda, misinformation, and more. There are also issues of bias. Because text-to-images systems are trained on vast datasets of images scraped from the internet, they replicate unequal aspects of society. Ask a system to draw a picture of a CEO, for example, and it will typically produce an image of a white man.”
OpenAI has taken steps several steps to combat these issues. For instance, the company has filtered out violent and sexual images from DALL-E’s training dataset so that it does not respond to such prompts. To reduce bias in the generated images OpenAI also internally adds more specific data to a prompt to produce a variety of inclusive images. The company also makes sure that the generated images are also actively removed from its dataset so as to avoid the reproduction of images.
Also Read: Metaverse creating new jobs that did not exist before, says Accenture
The company also revealed that it is testing an API for DALL-E that would enable businesses to create their own apps and plug-ins using the output of the system. This would make it much simpler for OpenAI to market DALL-E's output and perhaps even integrate the system with tools used by designers and illustrators. And no, it is not coming for your paycheck.
All serious talk aside, DALL-E is a genius and it is a fun tool. I would not be exaggerating if I said I spent three hours generating random images and testing its limits. The only thing it could not do was generate Rihanna’s next album cover.
Users will get 50 credits free while signing up for DALL-E and then 15 more free credits every month after that. Each credit can be used to generate a single image or a variation of an image.
Also Read: Women's platform coto announces 5,000 exclusive NFTs for early community creators
Check out our in-depth Market Coverage, Business News & get real-time Stock Market Updates on CNBC-TV18. Also, Watch our channels CNBC-TV18, CNBC Awaaz and CNBC Bajar Live on-the-go!