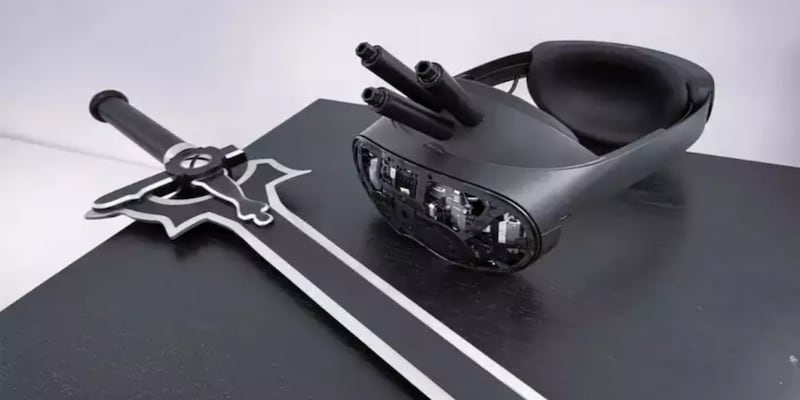 According to Luckey's blog, titled "If you die in the game, you die in real life," the VR headset “NerveGear” featured in the anime TV series "Sword Art Online" inspired him to create the deadly gaming device.

In The Matrix, Morpheus tells Neo that death within the matrix would result in actual death in the real world. It sounds fun to watch it in the movie, but what if we tell you that this can actually happen in the real life too?

Palmer Luckey, the creator of the Oculus headset which now serves as the backbone for Mark Zuckerberg's metaverse ambitions, announced in a blog post that he has developed a Virtual Reality headset that can kill people for real if they die in the game. Luckey for sure has upped the stakes of losing in a game to another level.
According to Luckey's blog titled "If you die in the game, you die in real life", the VR headset, 'NerveGear', featured in the anime TV series Sword Art Online inspired him to create the deadly gaming device.
“The idea of tying your real life to your virtual avatar has always fascinated me — you instantly raise the stakes to the maximum level and force people to fundamentally rethink how they interact with the virtual world and the players inside it,” Luckey said.
Also read: How to get started with virtual reality
In Sword Art Online, players who wear this type of headset will suffer microwave-induced brain melt if they fail to escape a mad scientist's trap.
Coming to Luckey's headset, things are decidedly more gory — he claims that the headset blows up a person’s head using charge modules.
Luckey said that, in contrast to the fictitious NerveGear, he was unable to develop a device that could kill its user with "powerful microwaves", hence he chose explosives to blow the heads of those who lose.
The headset is halfway done
“The good news is that we are halfway to making a true NerveGear… The bad news is that so far, I have only figured out the half that kills you. The perfect-VR half of the equation is still many years out,” Luckey said.
He further added that his headset opens up the multiple possibilties that are bound to happen with the realm of virtual reality.
“I have plans for an anti-tamper mechanism that, like the NerveGear, will make it impossible to remove or destroy the headset,” he said.
However, testing that out could result in death.
“This is why I have not worked up the balls to actually use it myself,” Luckey admitted.
Death and fascination the real of virtual reality
A study by Jorden Lowen published in 2018 on the basis of analyzing some VR games argued that contemporary virtual reality technology can change video gaming's relationship to death through its ability to trigger out-of-body experiences.
Many researchers in the past have also questioned all new technology and media as they shape how we think about ourselves in relation to death, embodiment and subjectivity.
Although the VR headset by Luckey is not available to be bought now, it would be interesting to see how it pans out and how people react.
"It is also, as far as I know, the first non-fiction example of a VR device that can actually kill the user. It won't be the last. See you in the metaverse," Luckey concluded.
If the VR headset ever sees the light of the day, will you buy it? Do you feel... Luckey?
Also read: This virtual reality device lets you see, touch and taste stuff
Check out our in-depth Market Coverage, Business News & get real-time Stock Market Updates on CNBC-TV18. Also, Watch our channels CNBC-TV18, CNBC Awaaz and CNBC Bajar Live on-the-go!