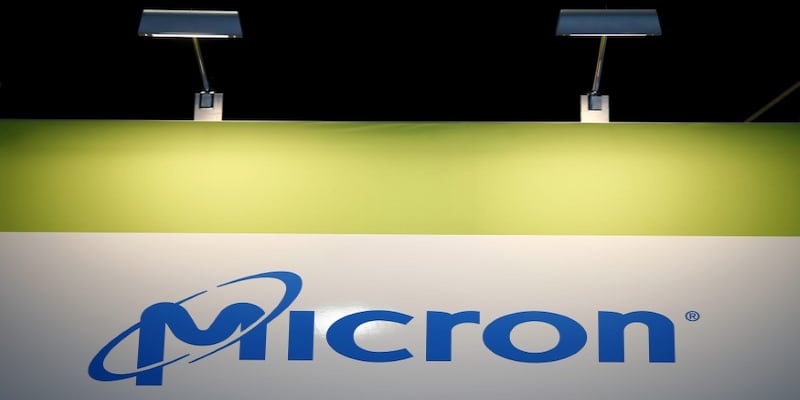 Shares in the sector had been shaken on Tuesday by the first reports of the ruling, which added to a growing list of intellectual property disputes between Washington and China in the technology sector.

Micron Technology Inc on Thursday played down the likely impact on its business of a temporary Chinese ban on some chip sales but said it would appeal a decision that has added to US-China trade tensions.

The firm's estimate that the ban imposed by a Chinese court in a patent infringement lawsuit would weaken quarterly revenue by just 1% drove its shares as much as 3.6% higher and lifted stocks of other US chipmakers.
Shares in the sector had been shaken on Tuesday by the first reports of the ruling, which added to a growing list of intellectual property disputes between Washington and China in the technology sector.
Micron said the ruling by a Fuzhou Court in a lawsuit filed by rivals United Microelectronics Corporation (UMC) and Fujian Jinhua Integrated Circuit Co temporarily bans it from selling some memory chips and solid state drives in China.
The chipmaker said it would comply with the ruling, but would request the court to reconsider or stay its decision.
"The Fuzhou Court issued this preliminary ruling before allowing Micron an opportunity to present its defense," said Joel Poppen, Micron's general counsel.
The lawsuit followed Micron's complaint in December against Chinese government-backed Fujian and UMC in a California court alleging misappropriation of its trade secrets and other misconduct.
China is trying to build its own semiconductor industry as part of its "Made in China 2025" strategy and as it seeks to lower its reliance on foreign companies, many of them US-based.
The dispute follows a ban on US firms supplying parts to China's telecom equipment maker ZTE as well as the drawn-out wait for Chinese regulators to approve Qualcomm Inc's $44 billion takeover of NXP Semiconductors.
"It certainly appears semiconductors could move to the prime time in negotiations between the Trump administration and China," Evercore ISI analyst C.J. Muse said. "Near-term this could favour non-US chipmakers vs. US chipmakers."
Several Chinese government-backed entities have poured billions into research and for buying companies with a trove of chip patents. Micron itself was the target of a failed takeover attempt by China's Tsinghua Unigroup in 2015.
The Chinese ban on Micron targeted its products sold through retail outlets and represented only a small portion of the chipmaker's revenue.
Analysts believe the ban is largely symbolic as hurting the US chipmaker would end up creating more pain for local Chinese firms who would have to rely on Korean firms Samsung Electronics and SK Hynix, pushing up memory chip prices.
"At the end of the day, the Chinese government is not going to impact its own local companies," said Kinngai Chan of Summit Insights Group.
Micron said it expects quarterly revenue to be within the previously guided range of $8.0 billion to $8.4 billion.
Shares of Micron, which fell 5.5% on Tuesday after the ban, was up 1.9% at $52.46 in afternoon trading on Thursday.
Other chipmakers also gained. Qualcomm Inc rose 3.2%, Broadcom Inc 2% and Intel Corp up 2.6%.
Check out our in-depth Market Coverage, Business News & get real-time Stock Market Updates on CNBC-TV18. Also, Watch our channels CNBC-TV18, CNBC Awaaz and CNBC Bajar Live on-the-go!