Metaverse will be all around us and worth $5 trillion by 2030, finds report

Metaverse will be all around us and worth $5 trillion by 2030, finds report A report by the the global management consultant said more than $120 billion has been poured into the metaverse just this year — nearly 10 times more than the $13 billion invested in 2021. What's more, the report predicts that the metaverse could be worth $5 trillion by 2030 — as big as the GDP of Japan.

Metaverse — tell me you didn't hear this term recently.

This nebulous, much-touted "future of the internet" has increasingly been a talking point, especially since social media behemoth Facebook changed its name to Meta Platforms as "metaverse is the next frontier just like social networking was when we got started".
Microsoft said its $70 billion acquisition of gaming company Activision Blizzard would “provide building blocks for the metaverse”.
The metaverse may only catch the passing fancy of the average Indian user, but, according to a report by global management consultant McKinsey, more than $120 billion has been poured into the metaverse just this year — nearly 10 times more than the $13 billion invested in 2021.
What's more, the report predicts that the metaverse could be worth $5 trillion by 2030 — as big as the GDP of Japan, and much too big for companies to ignore.
"It is shaping up to be the biggest new growth opportunity for several industries in the coming decade, given its potential to enable new business models, products, and services, and act as an engagement channel for both business-to-consumer and business-to-business purposes," McKinsey said in the report titled 'Value creation in the metaverse: The real business of the virtual world'. The study covered more than 3,400 respondents, including consumers and business owners, and this is what it found:

Industries most likely to be impacted by the metaverse include consumer and retail, media and telecommunications, and healthcare, and those industries are also among those already undertaking metaverse initiatives.

But it won't be an easy ride, transitioning to a metaverse-driven future. Businesses must design, test and launch metaverse-based activities, constantly tweaking them based on user feedback, while at the same time, ensuring user safety. Workers will have to be reskilled, specific guidelines must be laid out — it's a steep learning curve.
"Part of the workforce will need to be reskilled. Cities and countries serious about establishing themselves as hubs for its development will need to join the global competition to attract talent and investment. The metaverse also has obvious societal implications. A variety of stakeholders will need to define a road map toward an ethical, safe, and inclusive metaverse experience," McKinsey said in the report.
Three Steps To Create Value:
(Source: McKinsey's 'Value creation in the metaverse: The real business of the virtual world' report)
What is the metaverse?
Depending on whom you ask, the metaverse is a game, a training tool, a virtual classroom or boardroom, a piece of real estate, or even an online social space — a successor to today's social media; basically, whatever they need it to be. The report notes that the metaverse is currently difficult to define, even though the term has been in use since at least 1992 when author Neal Stephenson first coined it.

Since then, we have had movies like The Matrix Trilogy, Tron, Tron: Legacy, Ready Player One, etc which are set in a virtual world, a.k.a., the metaverse.

The report makes it a point to note that the metaverse and Web 3.0 — the next iteration of the World Wide Web — are not the same, even though they seem to be used interchangeably. Web 3.0 is the framework that will pave the way for the metaverse, but to the lay user, is there really a difference?
"Well, Web 3.0, by definition, succeeds Web 2.0. The metaverse, by definition, succeeds our current computing and networking paradigm. The fact that they both succeed what we experience as the internet today naturally intertwines the two," the report quoted Matthew Ball, managing partner of EpyllionCo and McKinsey knowledge partner.
Show Me The Money
According to the report, the sharp increase in investments in the metaverse signals growing confidence among companies and investors about the potential of this space. Further, the report stated that the value of an investment in the metaverse is significantly higher than it was for Artificial Intelligence, "which attracted $39 billion in investment in 2016 — arguably a similar stage in its development trajectory to the metaverse today". 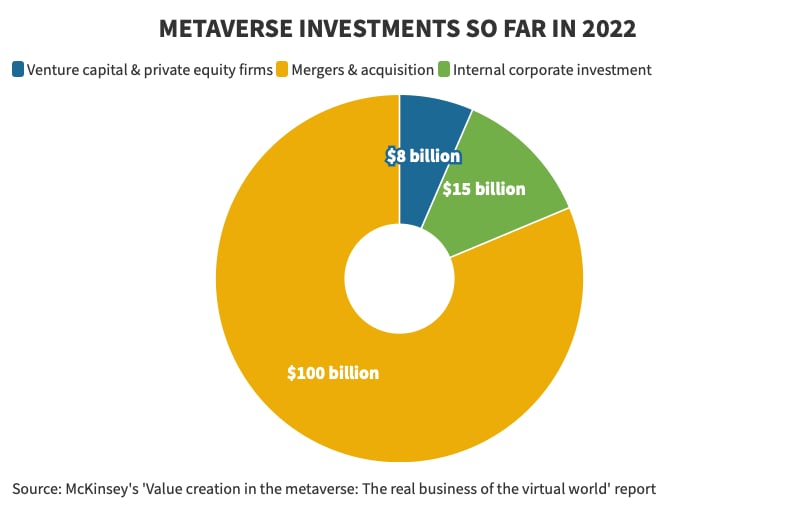 Some of the biggest names (that we know of) which have designs on the metaverse include — as mentioned previously — Meta and Microsoft, in addition to Apple, Disney, NVIDIA, Alphabet, LEGO, Epic Games, Coca-Cola, Gucci, Adidas, and BMW.
As noted above, by 2030, the metaverse is expected to be worth $5 trillion. According to the report, the sectors that will be impacted the most will be —consumer:  Virtual assets, gaming VR/AR hardware, e-commerce, live entertainment; enterprise: Banking, construction,  discrete manufacturing, education, government, healthcare provider, resource industries, professional services, retail, investment, education, health and fitness, advertisements, digital media, telecommunications, transportation, utilities, wholesale, media
consumer services, process manufacturing, and insurance.
Do not expect any overnight changes, however. As the report puts it, "Such generational changes ... tend to take years and are the result of an accumulation of incremental advances." However, do not mistake the metaverse for the real world, the report warns, adding that it "should complement what people do and, like virtual and in-person offices, allow free movement between the virtual and physical worlds in a way that expands our range of experiences rather than limiting them".
Also read: Shaktikanta Das' warnings against cryptocurrency continue; here's what RBI governor has said so far
Check out our in-depth Market Coverage, Business News & get real-time Stock Market Updates on CNBC-TV18. Also, Watch our channels CNBC-TV18, CNBC Awaaz and CNBC Bajar Live on-the-go!