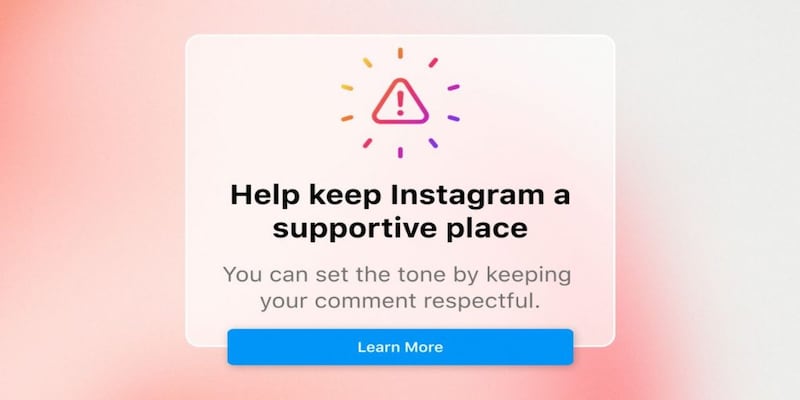 Meta, on Thursday, announced new updates to Instagram on protecting people from abuse on the platform with features like better blocking, Hidden Words updates and nudging people to be respectful while using Instagram.

Meta, on Thursday, announced new updates to Instagram on protecting people from abuse on the platform with features like better blocking, Hidden Words updates and nudging people to be respectful while using Instagram.

“Last year, we updated how blocking works on Instagram to give you the ability to not only block a single account, but also any new accounts someone may create. This update allows you to also block existing accounts that person may already have. Based on initial test results from this new change, we expect that four million fewer accounts will need to be blocked every week since these accounts will now be blocked automatically,” the company said in a blog post.
Hidden Words, a feature that was introduced last year to help people automatically filter harmful content from their comments and message requests, has also received an update. “When people with more than 10,000 followers turn on Hidden Words for comments, on average, they see 40 percent fewer comments that might be offensive,” Meta added.
Also Read: India's antitrust watchdog hits Google with Rs 1,337.76 crore penalty
The new update will automatically turn on Hidden Words for Creator accounts. Other improvements include:
Also Read: Google releases Android 13 (Go edition) for budget smartphones
A new notification on the platform will reportedly encourage people to pause and consider how they want to respond before replying to a comment that our systems tell us could be offensive. These nudges are live now for people whose apps are set to English, Portuguese, Spanish, French, Chinese or Arabic.
Meta also added that it has started reminding people to be respectful in DMs when sending a message request to a creator. “This nudge helps people remember that there’s a real person on the other side of their DM request, and encourages more respectful outreach to people they may not know. We’re rolling out this reminder globally in the coming weeks,” it said.
Also Read: Netflix to start ad-based plans in November and monetise account-sharing in early 2023
Check out our in-depth Market Coverage, Business News & get real-time Stock Market Updates on CNBC-TV18. Also, Watch our channels CNBC-TV18, CNBC Awaaz and CNBC Bajar Live on-the-go!