India’s smartphone shipments declined 11 percent YoY to just over 45 million units in Q3 2022-23 (July-September), according to the latest research from Counterpoint’s Market Monitor service. The YoY decline, which is the first ever for a Q3, can be attributed to the high base last year due to the pent-up demand during Q3 2021-22, as well as lower consumer demand in the entry-tier and budget segments in Q3 ended September 2022.

Commenting on the competitive landscape and brand strategies, Research Analyst Shilpi Jain said, “After the 5G network rollout, consumers are quite keen on purchasing 5G smartphones, especially the upgrading users. In Q3 2022, 5G smartphones registered 31 percent YoY growth and contributed to 32 percent of the total shipments. In terms of price bands, the premium segment (>Rs 30,000) reached its highest-ever share of 12 percent during this quarter.”
Jain also added that Apple led the premium segment, followed by Samsung and OnePlus. The brand reached its highest-ever shipment share in India with a share of five percent in India’s smartphone market during the quarter. The iPhone 13 became the first iPhone to top the overall smartphone shipments in India in Q3 2022-23, a first for Apple in India. In the premium segment, Apple led the smartphone shipments, capturing a 40 percent share. 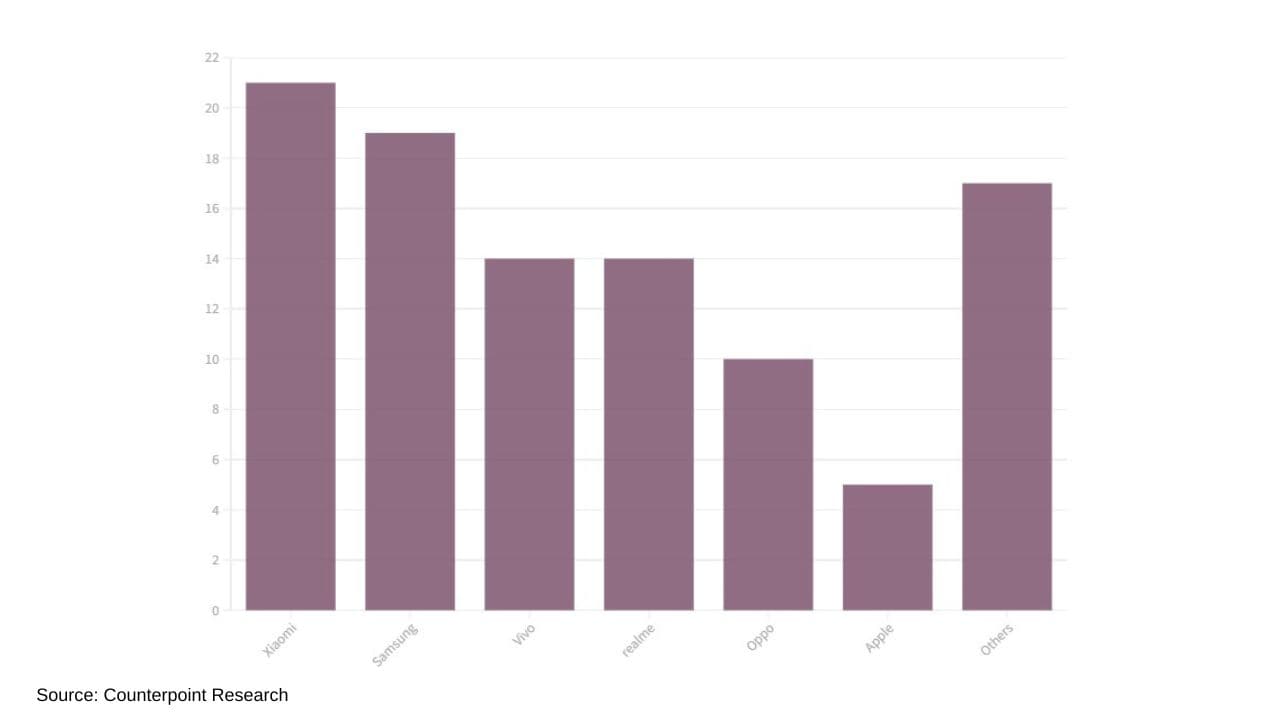 The sub-Rs 10,000 price band continues to be under pressure due to lower consumer demand and contributed to 27 percent of the total shipments, down from 31 percent a year ago.
Also Read: Apple adds new iPhone 14 maker in India in shift from China
According to the report, Samsung held the second spot in this quarter. It was the only smartphone brand among the top five to register an annual growth.
Samsung led the handset (feature phone plus smartphone) market as well with an 18 percent share. It also remained the top-selling 5G smartphone brand in India. The growth, as Counterpoint mentioned, can be attributed to aggressive online channel stock replenishment before the festive season. Samsung was the top smartphone brand in September 2022. In the premium segment, Samsung was the fastest-growing brand among the top five brands.
Counterpoint also added that Nothing launched its first smartphone during this quarter and managed to capture mindshare as well as market share in the premium segment. Another brand which made an impact in the premium segment was Google, with its Pixel 6a, which performed strongly during August and September.
Also Read: Mark Zuckerberg announces global roll out of Communities on WhatsApp
(Edited by : Shoma Bhattacharjee)
Check out our in-depth Market Coverage, Business News & get real-time Stock Market Updates on CNBC-TV18. Also, Watch our channels CNBC-TV18, CNBC Awaaz and CNBC Bajar Live on-the-go!