Gamification and Web3 Learning, export of Indian edtech services, shift from ‘extracurricular’ to ‘life as a CV’, education emerging from communities, hybrid model of learning, verticalised upskilling, digitization of schools and more consumer centric presence will form the key themes for the edtech companies in the future as per ‘Indian Edtech in 2022’ report by Blume Ventures, which has backed edtech startups such as Unacademy and Classplus.

Edtech companies, once the much touted options for investors, have seen the the year 2022 tough in India. While in the first half of the year the companies still benefited a bit riding on the pandemic aftermath, the ride in the second half of the year was really rough.

With decline in funding, people shifting to offline classes, loss making reports becoming a thing every quarter, layoffs, cost cutting measures and heavy competition it was a roller coaster ride for them.
BYJU’S, Unacademy and Vedantu, the three largest K-12 and test prep edtech unicorns in India, saw a massive hit resulting in laying off over 1000 employees this year.
Post Pandemic Pain
The ease in pandemic and opening up of schools marked up the start of the bumpy ride for most online education players.
“As post the pandemic, people moved back to in-person trainings most of those edtech companies which grew purely based on  virtual models saw a strong backlash. In addition, the intense competition to acquire customers, and the pressure for top line and growth, given the heavy VC investments, made it difficult for most resilient firms to survive,” said . Vikas Gupta: Chairman and Managing Director of edtech company Miles Education.
As per data from Bengaluru-based data provider Tracxn funding in the edtech sector declined to $2.43 billion in 2022, with just 159 deals as compared to having 319 deals in 2021 and 222 in 2020. 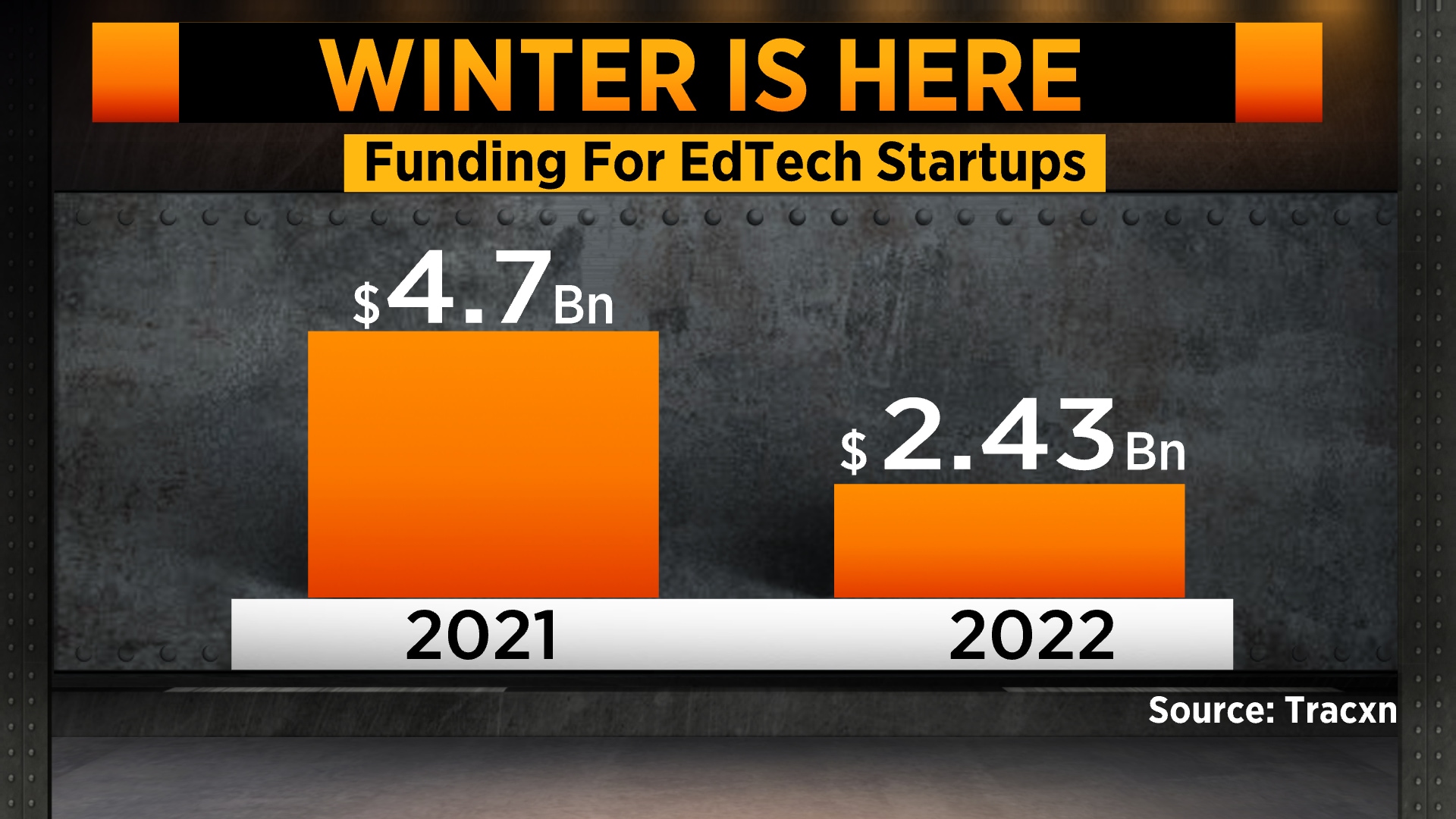 As a result of the funding winter being really cold in 2022 the edtech industry in India saw the maximum layoffs and shutdowns. 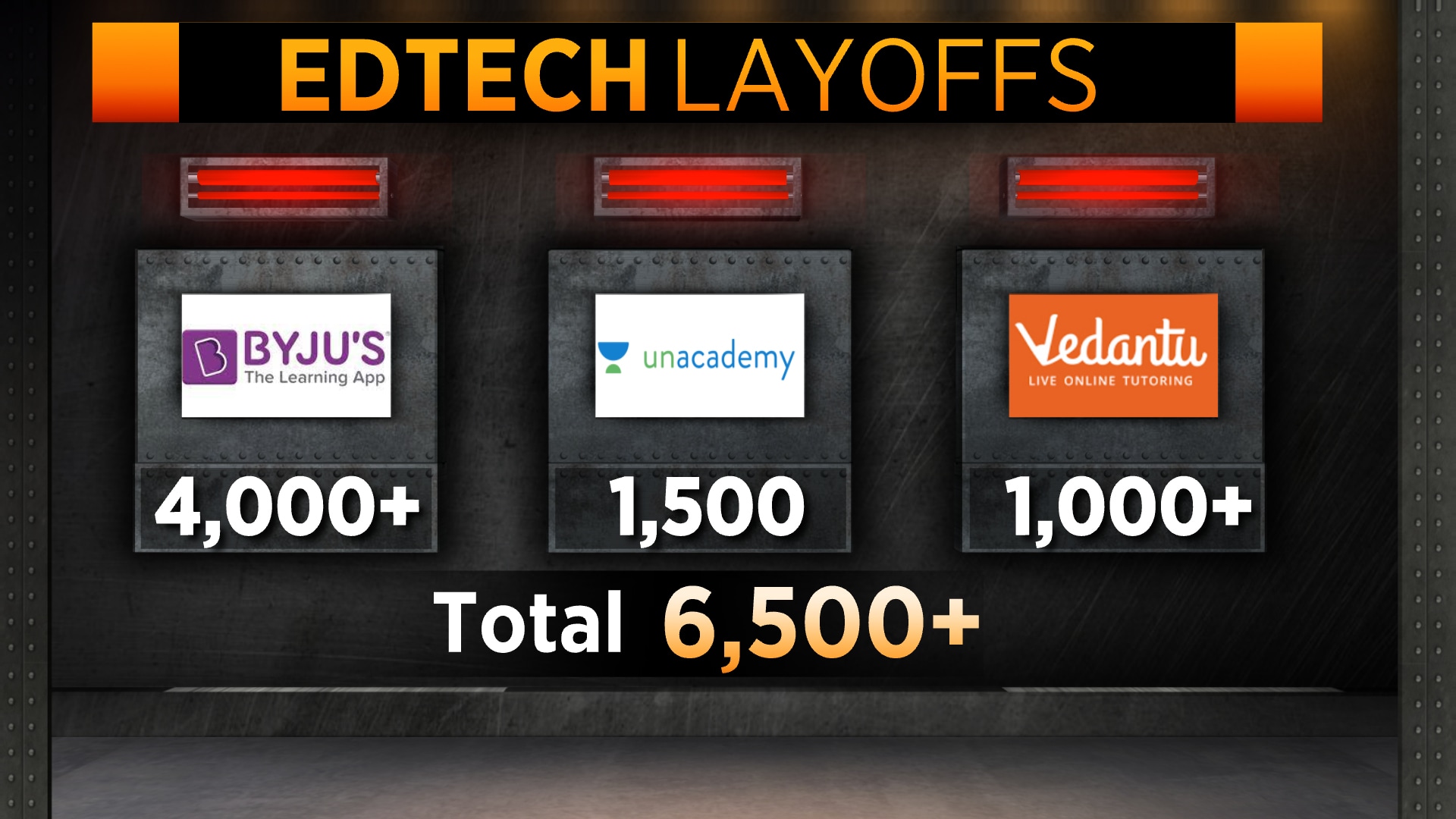 As per data from company releases and news reports compiled by CNBC-TV18.com nearly 7,000-9,000 layoffs happened in the edtech companies of India in 2022. Edtech shutdowns 2022
Lido Learning went bankrupt and left hundreds of employees in need of finding a new job and students in a lurch with tutor-less classes and unprocessed refunds.
As Covid eased edtech companies to lure customers started giving heavy discounts and then rapid scaling back of operations – leading to numerous layoffs, closing down of companies and creative accounting instances, added Gupta.
When it comes to profitability most edtech unicorns in the K-12 segment were on the downward trend this year. BYJU'S Vedantu and Unacademy revenue FY22
In the higher learning area upGrad reported net loss of Rs 626.61 crore in FY22 growing three fold from Rs 211.1 crore in FY21.
Amidst the losses edtech platform PhysicsWallah turned out to be profitable. The company reported a fourteen-fold increase in net profit in FY22 at Rs 97.8 crore as compared to Rs 6.93 crore FY21.
Alakh Pandey’s PhysicsWallah even became a unicorn this year after raising its first-ever institutional round of $100 million from WestBridge Capital and GSV Ventures in June 2022.
What’s next for edtech companies in India?
Unacademy group co-founder and CEO Gaurav Munjal tweeted in November that “2023 will be worse than 2022 for Tech. This is what I keep hearing,”

Meanwhile Gamification and Web3 Learning, export of Indian edtech services, shift from ‘extracurricular’ to ‘life as a CV’, education emerging from communities, hybrid model of learning, verticalised upskilling, digitization of schools and more consumer centric presence will form the key themes for the edtech companies in the future as per ‘Indian Edtech in 2022’ report by Blume Ventures, which has backed edtech startups such as Unacademy and Classplus.
Betting big on technology
" To promote capability development, edtech is concentrating on establishing a mobile learning approach. Peer-to-peer learning is one of the most important topics that Edtech will focus on through the use of technological platforms,” said Krishna Kumar, Founder and CEO, Learnbay
He further mentioned that use of Artificial Intelligence, blockchain mechanism, software-based learning can aid the edtech sector in India.
“To remain relevant, EdTech businesses must provide inclusive learning techniques and constantly innovate." said Kumar.
Also read: Young Turks | India’s startup story is absolutely intact, says Kunal Bahl
Ravi Bhushan, Founder and CEO of BrightCHAMPS also expects technologies such as metaverse and Web3 to be harnessed to access and disseminate knowledge to a much bigger set of learners. Extended Reality (XR) technology will be used to elevate teaching methodologies and increase retention rates.
“To my mind, the focus of the edtech industry this year must be to deliver superior learning experiences and outcomes and make education accessible to each and every kid across the globe," said Bhushan.
Going on a hybrid mode and tapping the international market
Setting up offline centres, hiring teachers is an area of exploration but according to experts that needs to have a sustainable approach as well.
“Brands need to offer classes in online and offline formats that competent teachers deliver with a more personalized learning approach. Sustainability in terms of profitability and not valuation must become a fundamental tenet.  Edtech businesses must be cognizant of their bloated CAC (Customer Acquisition Cost) and shrunken LTV (Lifetime Value) as it will lead to further cost increases.,” said Manan Khurma, Founder and Chairman, Cuemath.
BYJU'S has already been a hybrid mode company this year Unacademy also went hybrid. The edtech major announced the opening of an offline Unacademy Centre in Janakpuri, New Delhi this month.
Unacademy announced the launch of 15 offline centres in June, 2022. The first centre was opened in Kota, Rajasthan in the same month. Physics Wallah too this year opened its first offline centre in Kota, Rajasthan this year. Vedantu, in June, launched its first physical centre in Muzaffarpur, Bihar. (as per reports from PTI).
Meanwhile, BYJU'S, with its offline presence, is also already betting big on the international market. According to a report by IANS, the edtech unicorn made at least 10 acquisitions for a cumulative transaction value of about $2.5 billion last year and was aiming to file an IPO in the US through the SPAC route. BYJU'S acquired American-based kids learning platform Epic! in July 2021 as part of a cash-and-stock deal worth US$500 million.
The company in November roped in Lionel Messi as the first global brand ambassador of its social impact arm Education for All.
According to Atit Mehta, Head of Marketing at BYJUs the company aims to increase its presence in international market especially in Latam by signing up with FIFA and Messi.
Government policies in education sector can aid the edtech companies
Experts also believe that the Indian governments push towards digitization of schools, push of National Education Policy towards a holistic development and technological advancements can aid the edtech companies.
“Emphasis on regional languages shall help include the marginalized into the education system and improve the GER of the country. A concerted effort to include an element of on-job learning for all UG programs shall enable skill building in situated environments alongside academic prudence,” said Shantanu Rooj, Founder and CEO - TeamLease EdTech.
Beas Dev Ralhan, CEO, Next Education is of the view that government support to the edtech sector with NEP, digitization and 5G adoption can be a key factor for performance of edtech companies in 2023.
The edtech space will surely be one to lookout for in 2023 but one thing is sure as per experts that understanding customer needs, adapting with technology and better, building solutions and business models that are in alignment with the rapid changes in other industries as well will be key for edtech companies to have better results in 2023.
Also read: From Meta to Amazon to Twitter — A round up of big tech layoffs in 2022
(Edited by : CH Unnikrishnan)
Check out our in-depth Market Coverage, Business News & get real-time Stock Market Updates on CNBC-TV18. Also, Watch our channels CNBC-TV18, CNBC Awaaz and CNBC Bajar Live on-the-go!