Data center market in India presents a $4.9 billion investment opportunity in the period between the first half of 2020 and 2025, as the capacity is expected to grow from 375 MW to 1,078 MW in this period, according to a report.

According to JLL’s H1 2020 ‘re(Imagine) Data Centers Running India’s digital economy’ report, the impact of data protection laws, increased shift from captive to colocation (colo) data canters and implementation of new technologies like 5G, edge computing and the internet of things (IoT) will drive sustained investor demand for this asset class over the next five years. 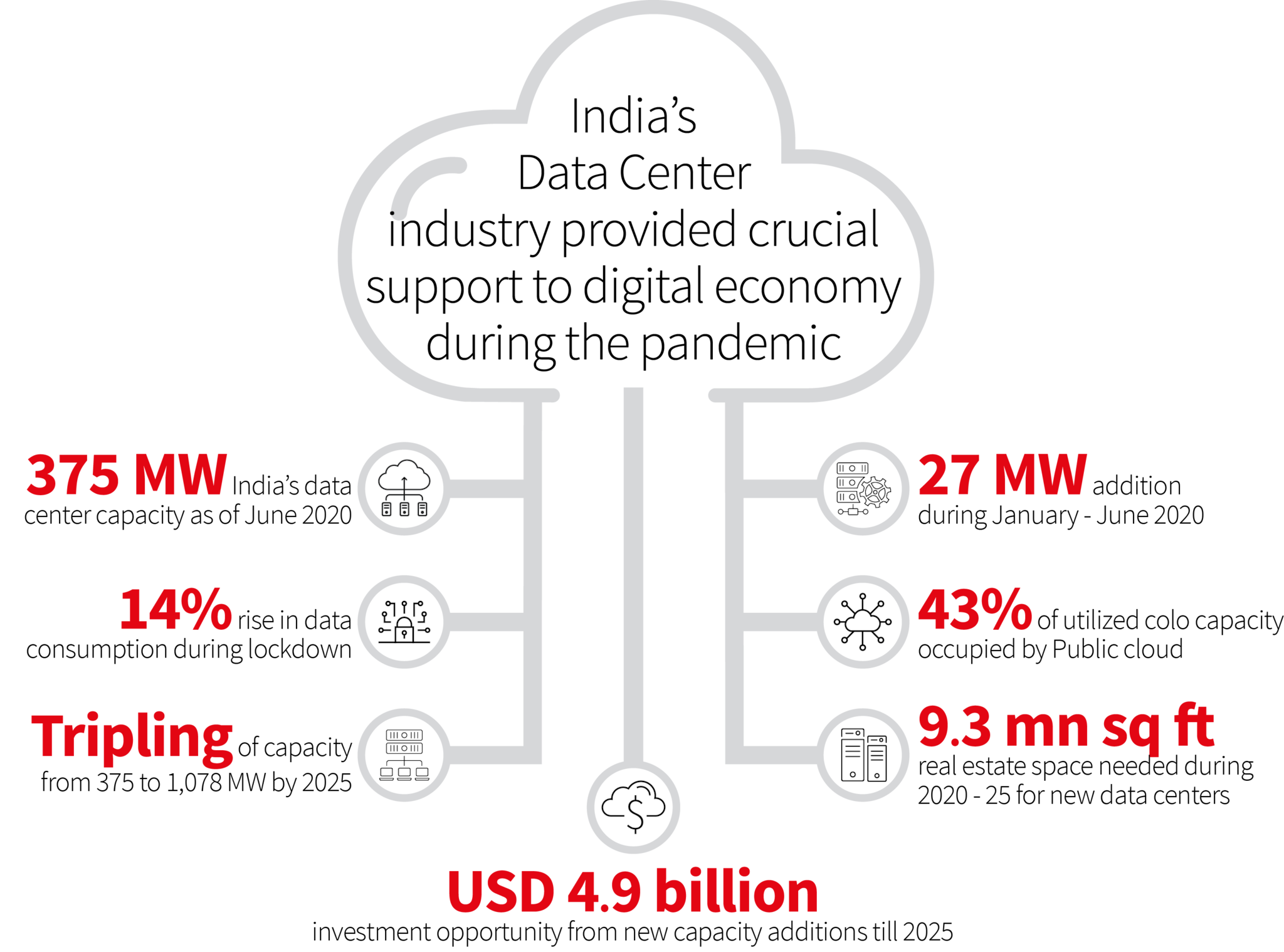 According to Nair, Growth in the sector will be further powered by colocation sites which, via, lower upfront costs, heightened data security, uninterrupted services and scalability will, further, influence investors to reimagine the potential of India’s data canter space.

The 703 MW expected capacity additions is translating to 9.3 million sq. ft. of space, which will open up greenfield investments for real estate developers and investors to fuel the future development of the sector,” added Nair.

There was a 12 percent rise in data consumption in Andhra Pradesh and Bihar, while 7 percent increase in Maharashtra, which was the highest amongst other states.

In terms of additional data supply, there has been an increase of 8 percent in H1, 2020, taking India’s total colocation capacity to 375 MW.

The quarter also witnessed supply addition of 27 MW, 56 percent of the total addition seen in 2019 (48 MW). Mumbai continued its lead with addition of 19 MW, followed by Bengaluru at 5 MW and Delhi NCR at 3 MW.

“Powered by the transition to work-from-home arrangements during lockdown, the country’s data center industry became the backbone of the digital economy and ensured a level of business continuity and sustained large portions of the country’s education system. Given shifts in the economy, we will continue to see data consumption increase manifold for the foreseeable future,” said Rachit Mohan, India Head, Data Center Advisory, JLL.

The dependence of several industries on digital infrastructure has partially helped mitigate the impact of the lockdown. IT/ITeS, Banking and Financial Services, e-commerce, capital markets, social media and education remained operational during the lockdown with help of digital resources, the report said.

“Mumbai is expected to see highest capacity addition as it continues to be the preferred choice for large cloud players because of its infrastructure advantage. Chennai is also proving an attractive destination due to its advantages of submarine cable landing stations and low development costs.” says Dr Samantak Das, Chief Economist and Head of Research & REIS, JLL India.

Data center industry in the country is expected to accelerate its transition, with operators, locations and technology adapting to the digital world, the report added.
Tags data data consumption in India digital economy