Cyclone Nisarga live tracker: What is landfall and where has storm reached?

Cyclone Nisarga, that hit the Indian west coast today is set to weaken into a cyclonic storm by late evening and into a deep depression by night, stated an IMD bulletin.

Landfall, which is defined by The US National Hurricane Center as ‘the intersection of the surface centre of a tropical cyclone with a coastline’ can simply be explained as the movement of a cyclone from water to land.

Earlier, the landfall process of the cyclone had commenced close to Alibag in Maharashtra around 1 pm.

According to the IMD, the cyclone has moved north-eastwards after its landfall today. It lay centred over coastal Maharashtra as of 2.30 pm and is currently located 75 km southeast of Mumbai and 65 km west of Pune. 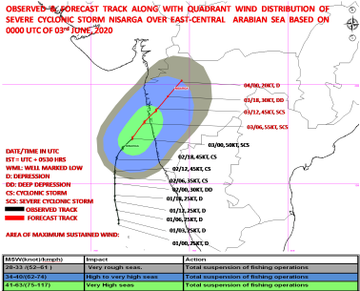 IMD had earlier predicted that the cyclone will make landfall around Alibag in Raigad district between 1 pm to 4 pm.

The Nisarga cyclone is the second to hit India after Cyclone Amphan that hit the eastern coast of India a few weeks back.

The cyclone is expected to bring wind speeds up to 100-120 kmph over Mumbai,Thane and Raigad districts of Maharashtra.

The western coast of Goa and Maharashtra have already reported rainfall brought on by Cyclone Nisarga, even as the monsoon is formally still to arrive in the region in a week.

Here is how you can track the course of Cyclone Nisarga:

People can track the cyclone by logging in to the official website of IMD. The user has to select ‘Cyclone’ from ‘Our services’ section on the website to access a menu on the left corner that gives details such as national, an hourly bulletin on cyclone, wind warning and storm surge warning.

If the user clicks on the Track of cyclonic disturbance’ section then the page will lead to the current status of the cyclonic formations.