Boult Audio, a company known for budget audio accessories, has made its foray into the smart wearables market with the Drift, a smartwatch that boasts of a plethora of features. It's a decent device for this price range, though there is a lot of room for improvement. Rating: 3.5/5

The Drift comes in black, white, and a silver-grey, while the Cosmic comes in rose gold, blue and black. The company said the introductory price is Rs 1,999 for the Drift and Rs 1,499 for the Cosmic. I received a review unit of the Drift in Black, though the packaging pegged the price at Rs 7,999.
I have used the Drift since June 30, and I have thoughts: 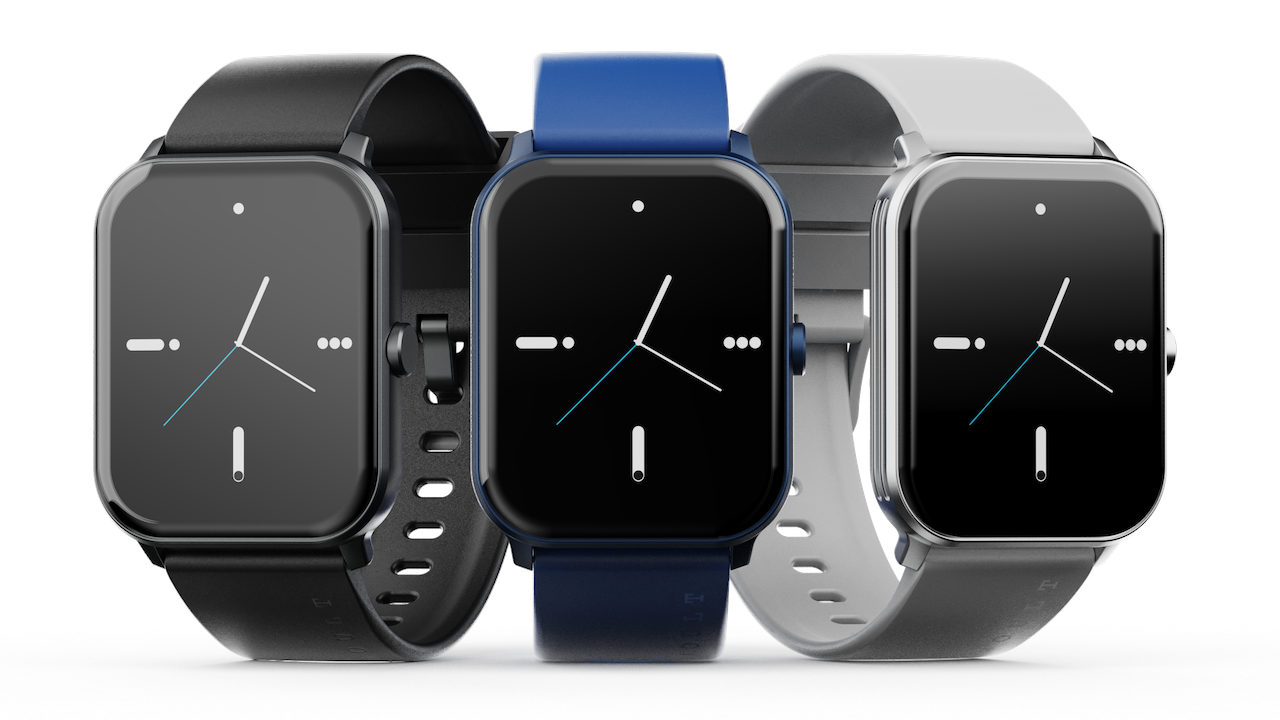 (Image: Drift)
Design
This is where the smartwatch scores the highest points — its square aluminium casing with rounded edges, comfortable silicone strap and a black that's almost a deep grey give the Drift a premium feel, so much so that it's hard to believe it comes at this price. I wore the watch continuously for 10 days, only taking it off at shower time — the watch boasts of IP68 water resistance, but I was reluctant to put it to the test, obviously — and the straps don't chafe against your skin. In fact, thanks to its light weight, I sometimes forgot there was a watch on my wrist. The watch did survive a brief spell of rain when I was out on a walk, so the IP rating holds merit. 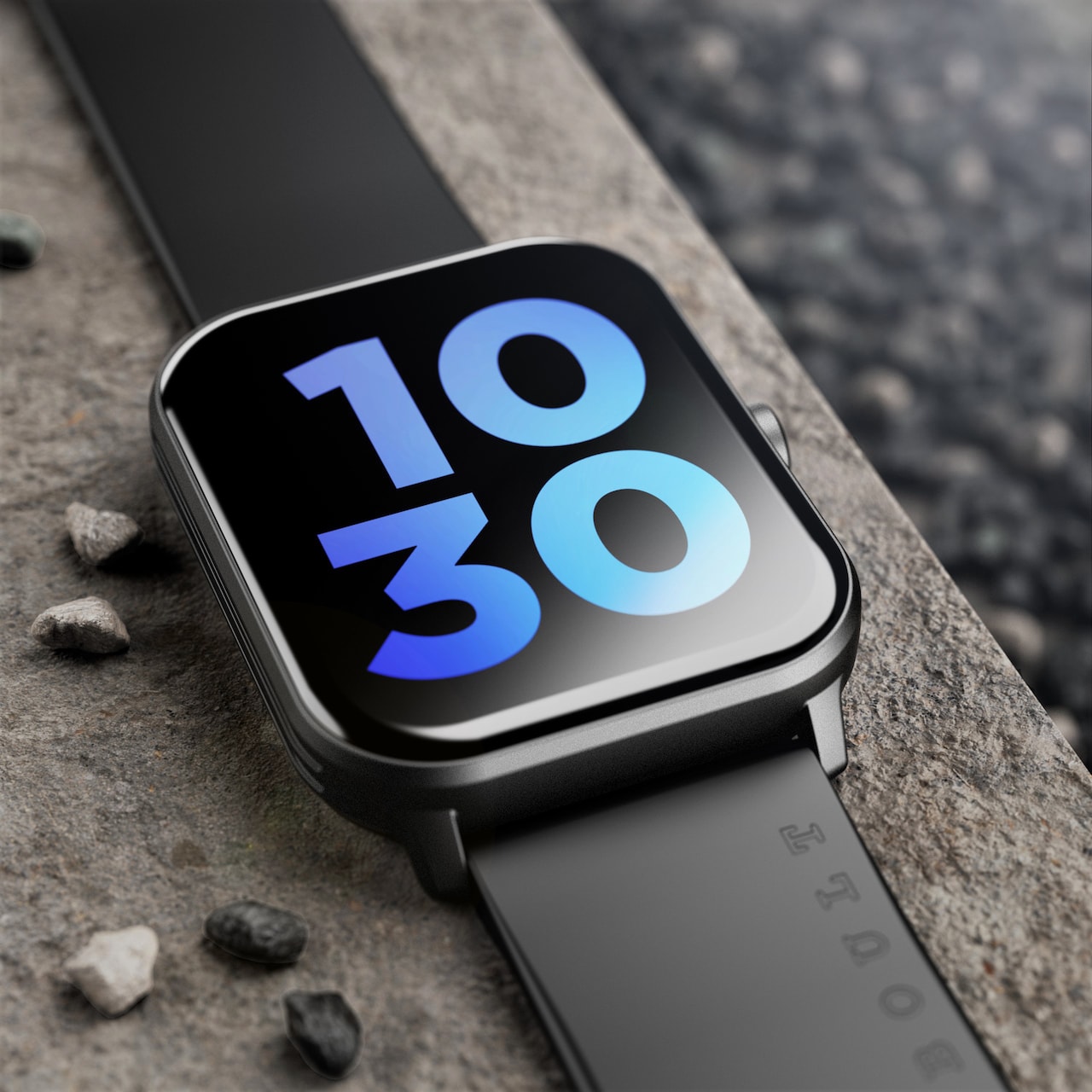 (Image: Boult)
User interface
Design apart, this is the one area that is crucial to judging a smartwatch and, unfortunately, the Drift comes up short in this department. There are lags and judders while scrolling, and the watch's near-complete dependence on its companion smartphone app for a holistic experience takes away from its main function as a health tracker.
Don't get me wrong — the watch certainly allows you to scroll sideways, and then downwards to track different metric — heart rate, sleep, activity, etc — but the lag and the rough edges to the software make it a slow, frustrating experience. That said, the watch I received was possibly on a pre-release software and future updates will fix this problem.
Now, what do I mean when I say the watch has near-complete dependence on its companion smartphone app? To begin with, downloading the app is a confusing experience, at least on iOS. The literature inside the box tells you to scan a QR code to directly the BOULTFIT app, but scanning the code instead directs you to the page for an app calle "Da Fit". It took me a while, and a lot of hesitation, before I downloaded the app. Mercifully, name aside, it seemed to be a legitimate app that has three simple tabs — watch settings, personal profile, and health tracking. 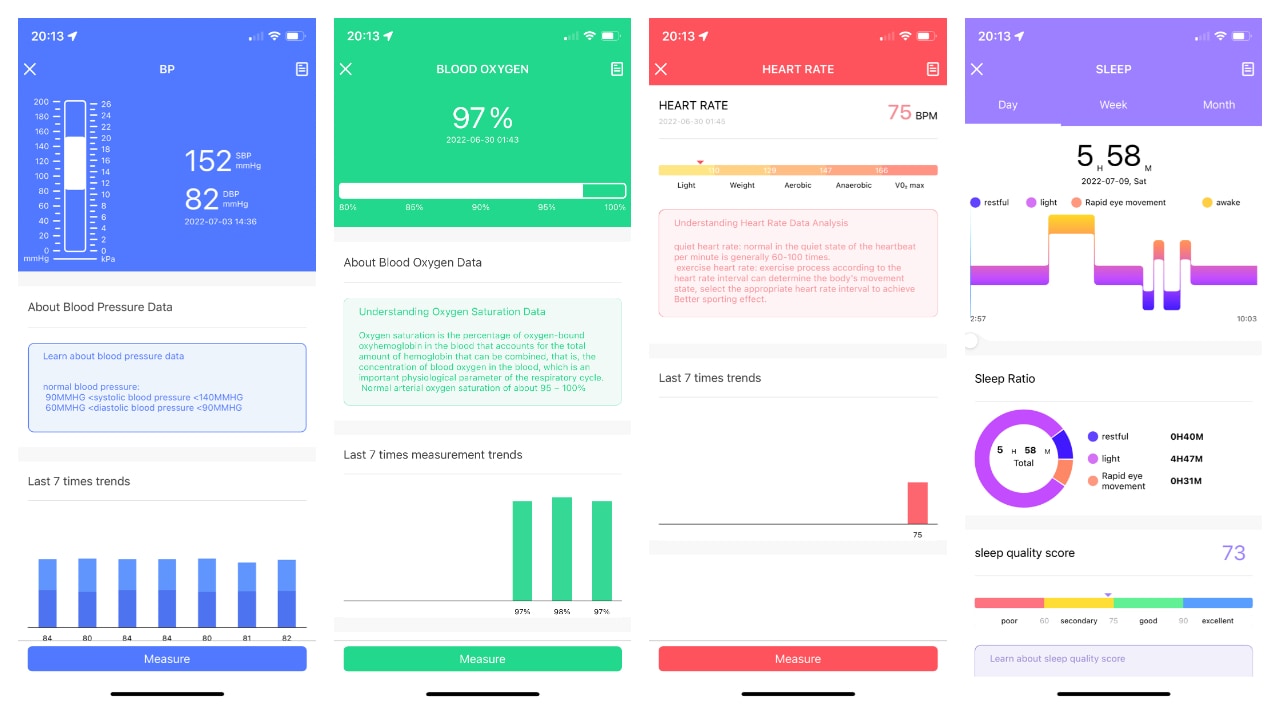 The first two are self-explanatory. The watch settings is where you can configure the watch to suit your personal needs, such as notifications, watch face, etc, and also to update the watch's software. Some elements of software design appear heavily inspired by the Apple Watch, such as the charging indicator, the three activity rings, etc.
The health metrics tab was, to me, the most frustrating part. Metrics like blood oxygen monitoring (SpO2), heart rate, sleep, and blood pressure can only be triggered using the app — the watch will then measure the metrics and send data to the phone app, which then displays the information. While the app interface itself is pleasant, what is not is the fact that you must whip out your phone to check your vitals every single time. 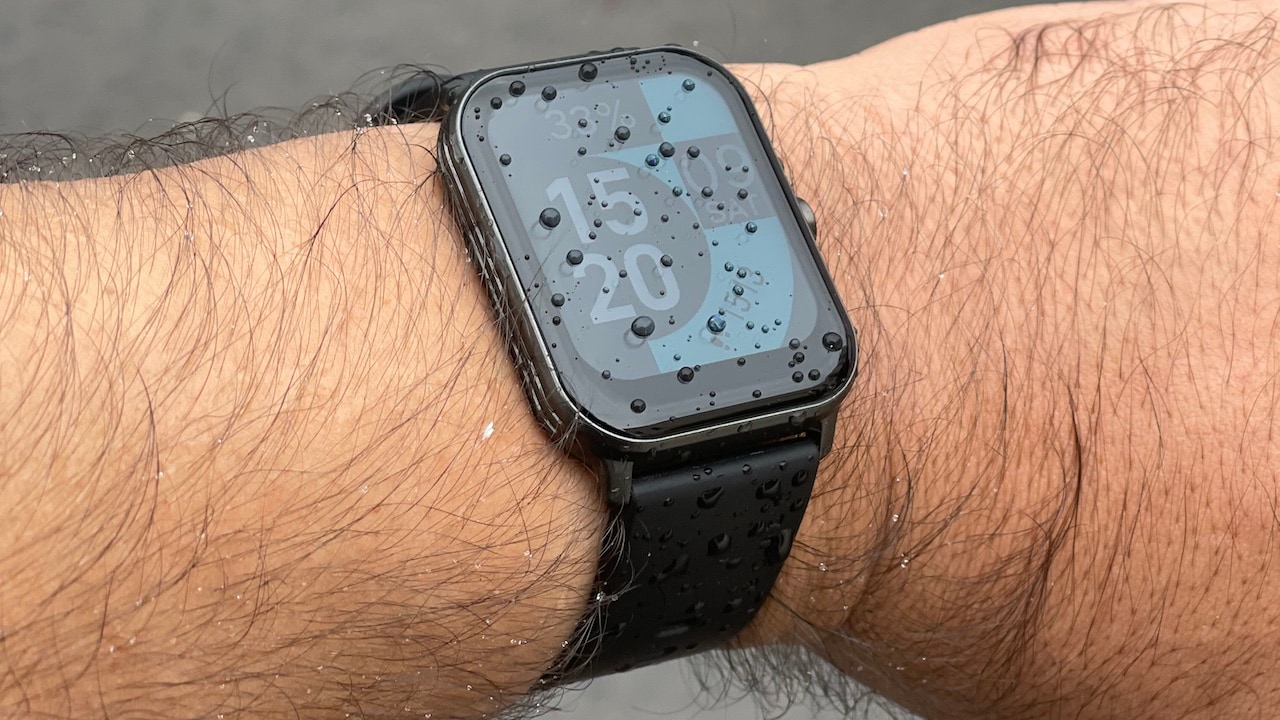 The watch did survive a brief shower when I was out on a walk, so the IP rating holds merit. (Image: Vijay Anand)
The watch faces are merely cosmetic. While different faces display different information — steps, heart rate, time, date, battery level, etc — they are non-interactive. By that I mean the watch face is completely static — you must scroll sideways to each section to see the data gathered by the watch.
The data itself seems accurate enough— the steps are counted and added to your daily tally at a quick clip, though sleeping tracking can be a hit or a miss.
The device has a crown, but it only serves the function of a home/power button. You can only return to the home screen of the watch, or turn it off/on. While it rotates, the crown cannot be used to scroll up or down. 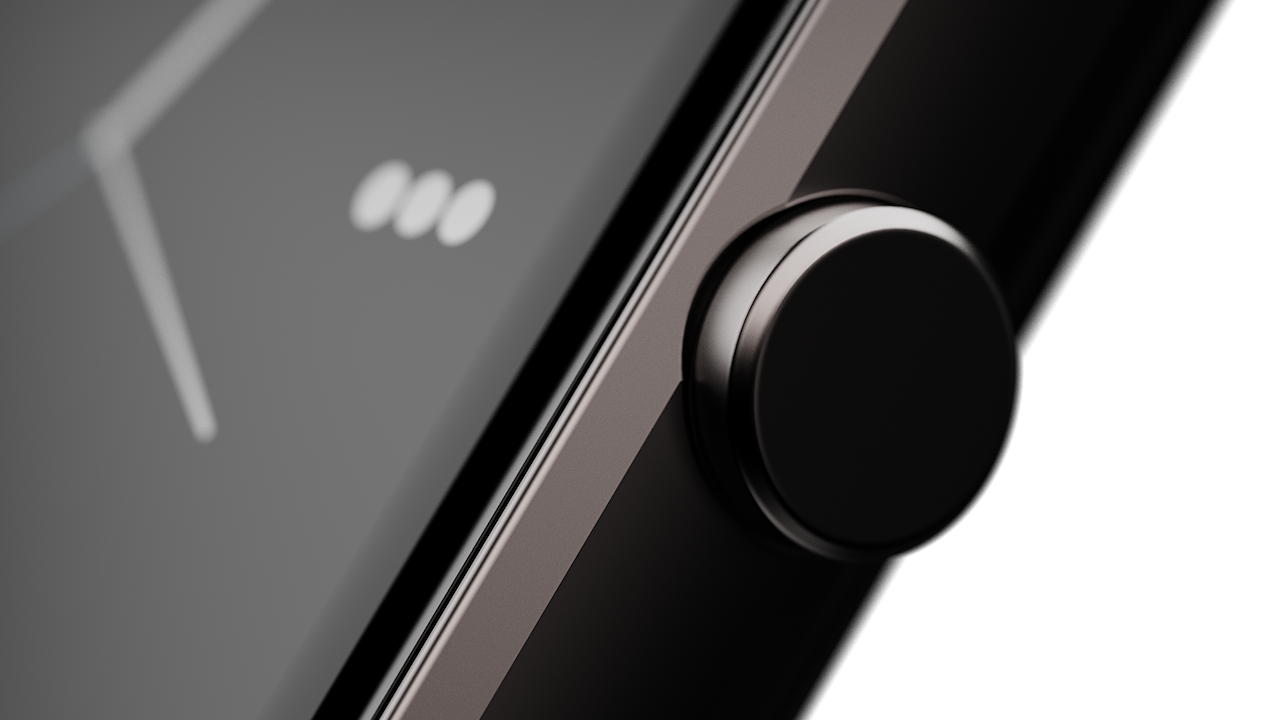 (Image: Boult)
The smartwatch also boasts of Bluetooth-enabled calling, but it essentially acts as a Bluetooth speaker for your smartphone. Not ideal, but a good enough start.
Display
The watch is also let down by its poor resolution. The screen is pleasantly bright, but the low resolution makes for a less-than-suitable user experience. You can almost count the individual pixels if you look closely enough.
All in all, the user interface is very unintuitive and hopefully, Boult will either fix it through software updates or by tweaking it in future watch releases.
Battery
This is the one area the Boult Drift wins a gold medal — on a single charge, the battery, with regular use, lasted me around 8 of the 10 days in the review period. Coming from an Apple Watch user that has to charge it at least once per day, multi-day battery life was awe-inspiring, at the very least. This is one area Boult must not tinker with. 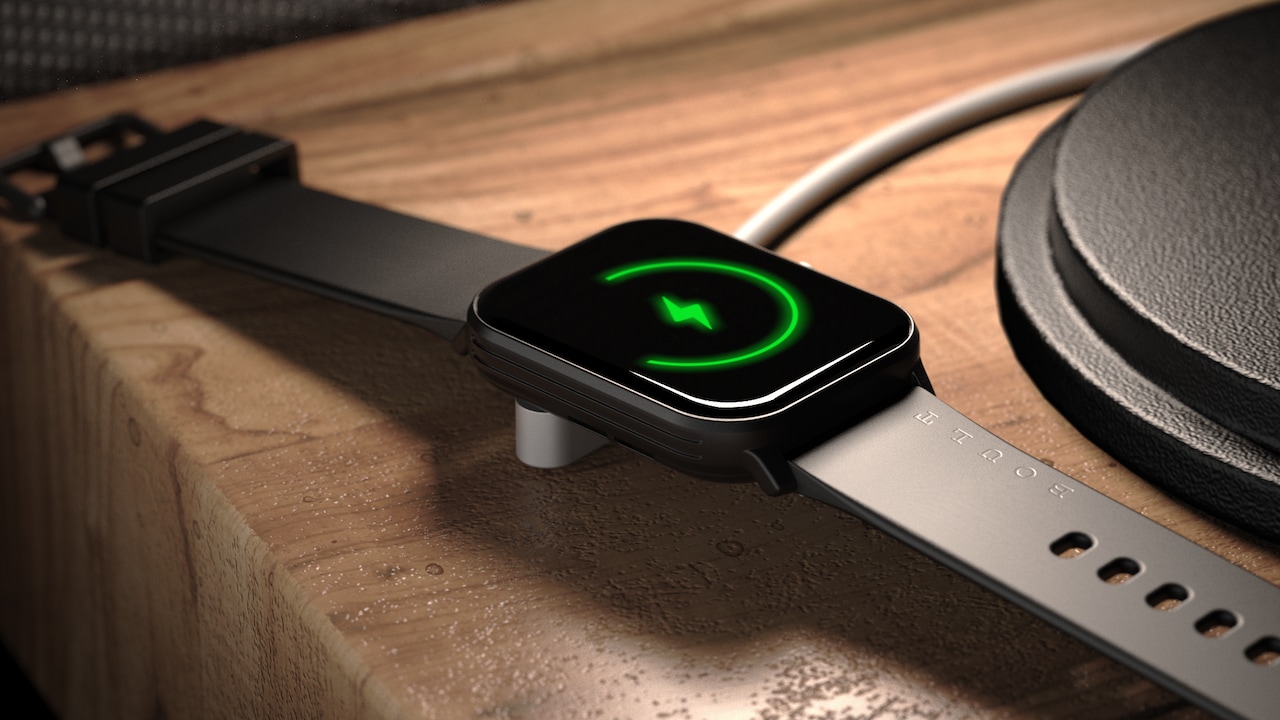 The Drift comes with a proprietary magnetic charging cable (Image: Boult)
Conclusion
Boult made a decent debut with the Drift, although the overall experience is somewhat lacking. But given the price range and the target consumer, this is hardly a complaint. That said, this is perfectly in line with every other first-generation device out there — there are plenty of rough edges, but the foundation on which Boult can build its future devices is rock-solid. The essentials are all there — it's up to Boult to capitalise on them and keep releasing smartwatches that are an improvement over the previous generations.
Also read: Google launches Chromecast in India for Rs 6,399
Check out our in-depth Market Coverage, Business News & get real-time Stock Market Updates on CNBC-TV18. Also, Watch our channels CNBC-TV18, CNBC Awaaz and CNBC Bajar Live on-the-go!