Apple iPhone 14 Pro may have this unique feature

Apple iPhone 14 Pro may have this unique feature Apple has a history of keeping the best features for its top-of-the-line iPhones, and this year will be no different, with the rumoured always on display slated only for iPhone 14 Pro and 14 Pro Max. Apple will announce iOS 16 at the Worldwide Developers Conference on Monday.

Every year, Apple launches an array of iPhones that have most things in common, including processors and cameras. However, the iPhone maker keeps certain features exclusive to its flagship Pro models. Last year, for instance, the iPhone 13 series — from the Mini to the Pro Max — had the same processor and primary and ultra-wide lenses. but the Pro series boasted of an extra telephoto lens, a screen with a variable refresh rate (up to 120Hz) and the ability to shoot professional-grade videos.

At the Worldwide Developers Conference (WWDC) on Monday, the Cupertino giant is rumoured to announce an always-on feature for the iPhone lock screen at its To no one's surprise, the feature could be exclusive to the flagship iPhone 14 Pro and Pro Max, or, at the very least, limited to 13 Pro and above.
The iPhone's lock screen hasn't changed substantially since the shift from the skeuomorphic design (icons, apps mimicking real-world objects) in iOS 7 to the flatter design in iOS 8 in 2014. In 2017, the flashlight and camera buttons were added. There have since been incremental changes since, but nothing dramatic as is rumoured for iOS 16. 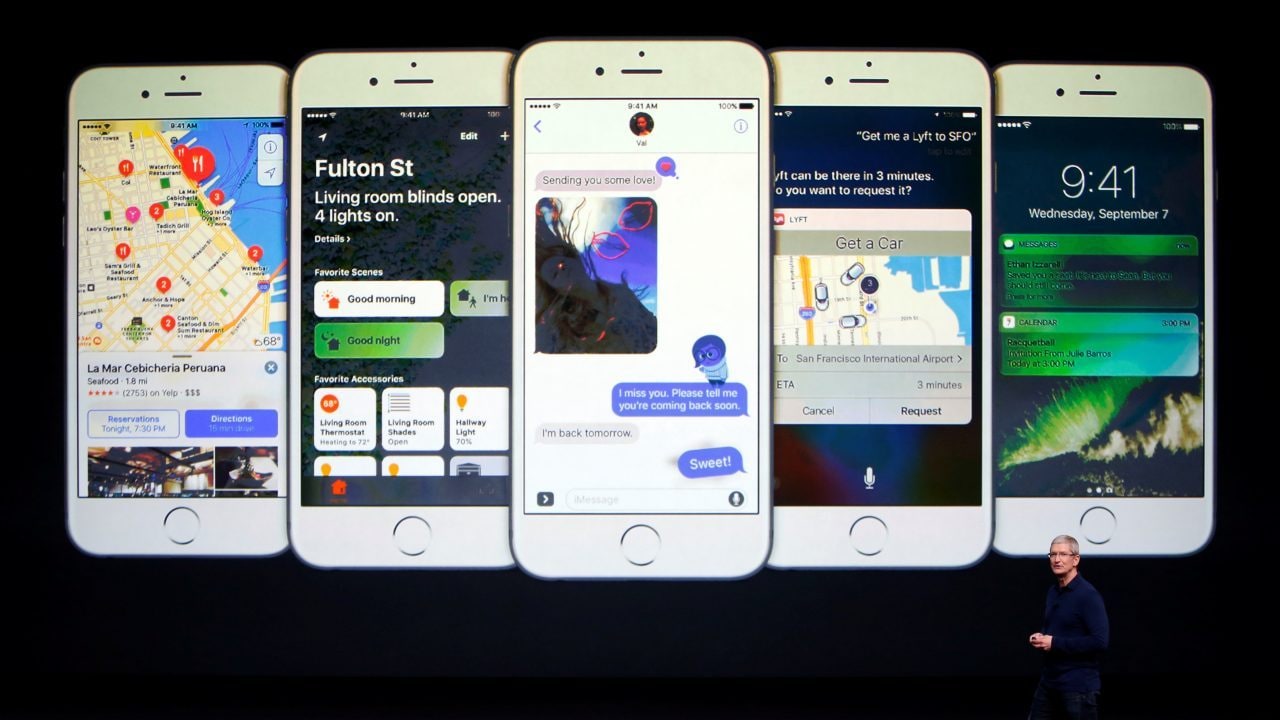 Apple has a history of keeping the best features for its top-of-the-line iPhones. It started with the iPhone 6 series in 2014.
TOP IPHONES: UNIQUE FEATURES OVER THE YEARS
iPhone 6/6 Plus: This was the first time Apple introduced a large-screen iPhone — it had played in the 3-3.5-inch territory till the iPhone 4s and broke into the 4-inch playground with the iPhone 5.
In 2014, Apple launched its biggest iPhone yet — the 5.5-inch 6 Plus. Apart from the larger screen and bigger battery, the two 6 series handsets had identical features except in one area, the camera. The base model had a regular m6 megapixel camera while the 6 Plus had the same lens, but with optical image stabilisation.
Also read: Apple Silicon's latest chip may not be an M2 but a final, even more powerful M1
iPhone 6s/6s Plus: The 6s series was a massive improvement over the 6, which was beset by the Bendgate controversy. The 6s was slightly thicker, and debuted 3d Touch, but again, Apple gave both 6s and 6s Plus the same camera, but OIS only to the Plus variant.
iPhone 7/7 Plus: This is the generation with which Apple clearly announced to the world that its highest-priced iPhone will have the best camera features. In this case, the 7 Plus helped Apple debut the Portrait Mode and was also the first iPhone to feature two rear cameras — a primary wide lens and a 2x optical telephoto lens. The iPhone X. (Image: Reuters)
iPhone8/8 Plus/X: Apple had surprises planned for 2017 — the 10th anniversary of the original iPhone. It first announced iPhone 8 and 8 Plus, which were largely on the same lines as their predecessors vis-à-vis the camera. And then, Tim Cook used Steve Jobs' iconic phrase, "...and one more thing", and launched the iPhone X, featuring an overhauled design, an OLED screen and a dual-camera setup that can take better, brighter photos than the 8 Plus. The iPhone XR lineup
iPhone XR/Xs/Xs Plus: For once, in 2018, Apple's top-range iPhone had nothing to differentiate them except the screen and battery sizes. But, to ensure its flagship phones were seen as flagship, Apple introduced the "mid-tier" XR, which shared the design language of the Xs, but had an aluminium frame, and a glass back with punchy, fun colours. Oh, and just a single lens on the back. 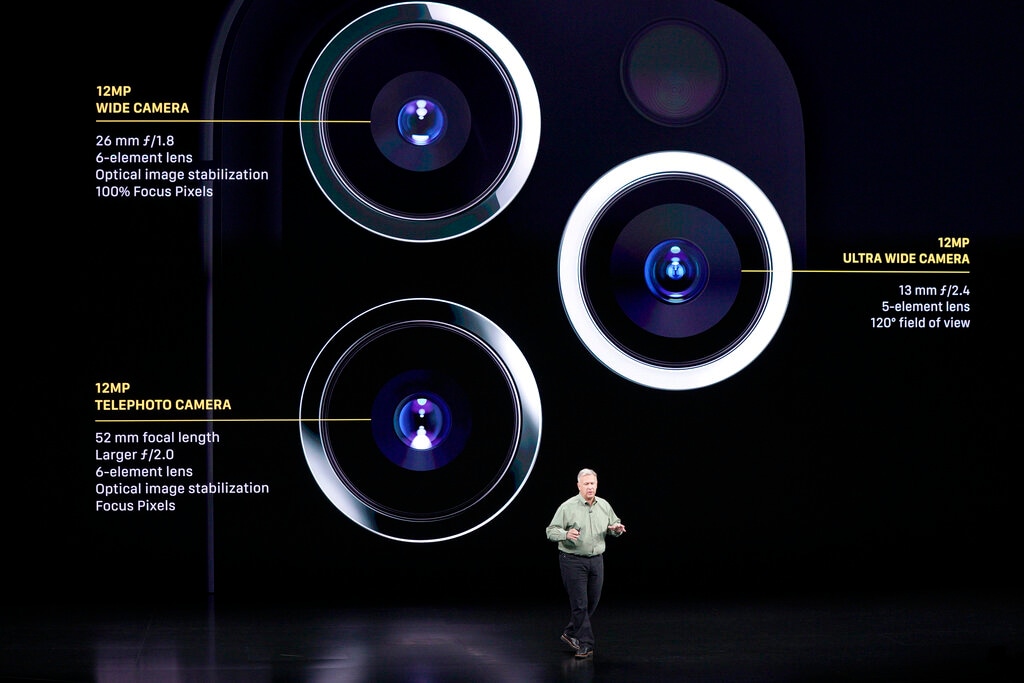 The iPhone 11 Pro camera system.
iPhone 11/11 Pro/11 Pro Max: The 2019 lineup was a straightforward refresh. The 11 was a successor to the XR, but with an extra lens.  The same applied to the 11 Pro and the 11 Pro Max, which boasted of night mode photography as well as a third ultra-wide lens. The entire lineup also boasted of improved battery life. 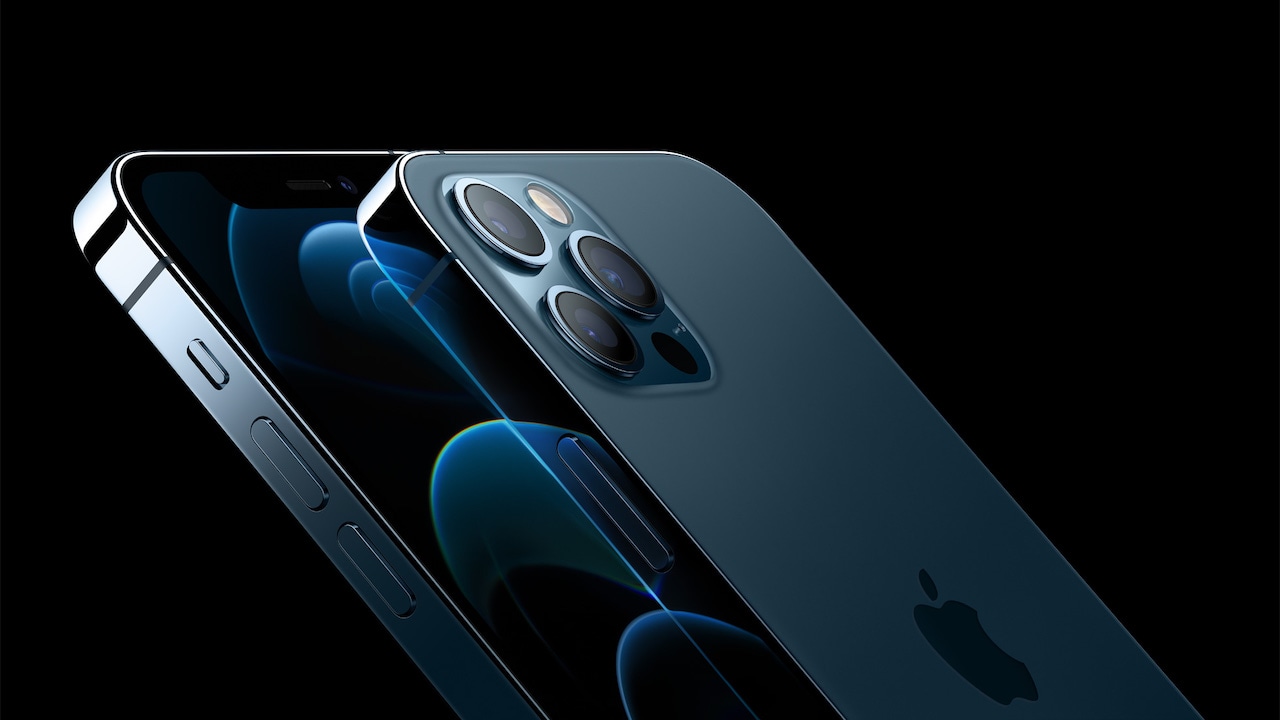 iPhone 12 Pro Max. (Image: Apple)
iPhone 12 mini/12/12 Pro/12 Pro Max: In 2020, Apple did something it had never done before — launch four phones simultaneously, taking its entire lineup to five including the SE that was launched earlier in the year. The new lineup featured the new flat edge design and also supported the new MagSafe wireless charging standard, as well as 5G.
The 12 Mini and the 12 were similar, with the exception of screen size — the cameras were the same, and the screen technology was the same.
The 12 Pro and Pro Max is where things got interesting. The 12 Pro obviously had made camera gains compared to its predecessor, it was a small step compared to the giant leap that the 12 Pro Max took — it had the new "Sensor Shift" technology for its primary lens, which promised better stabilisation, while the optical zoom increased from 4x earlier to 5x with the new telephoto lens. 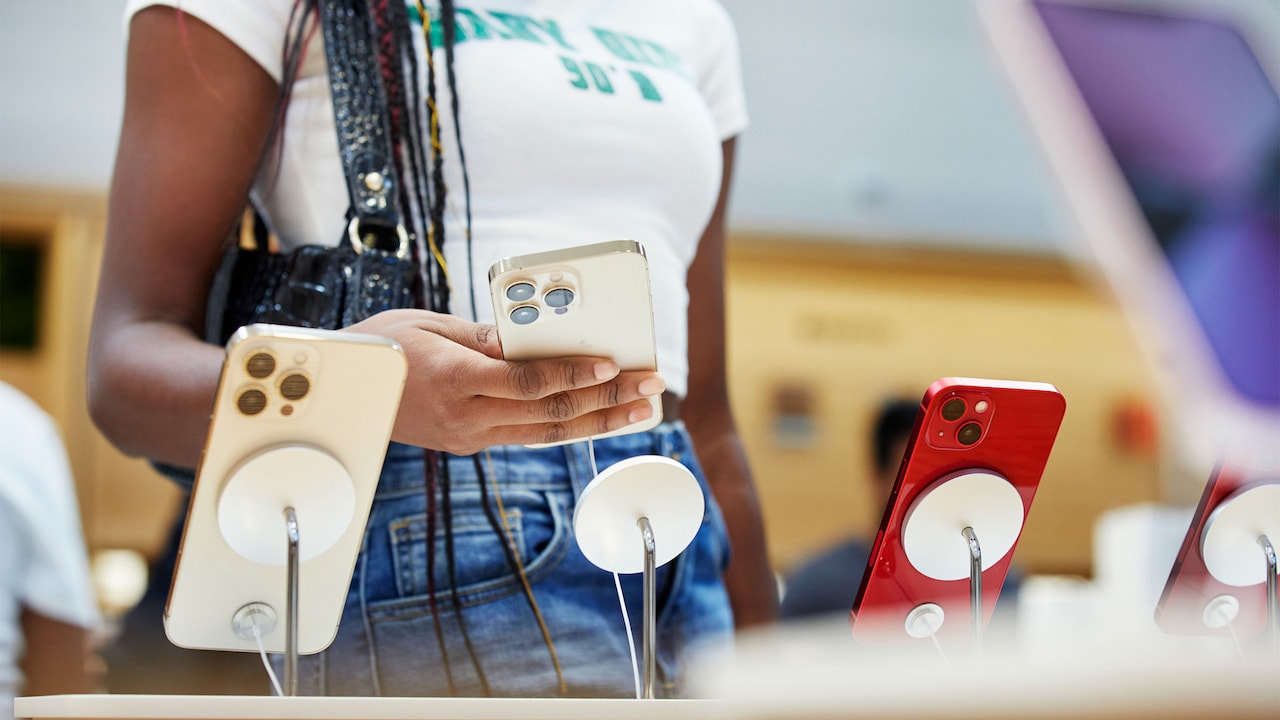 The iPhone 13 series is on display at a store in New York. (Source: Apple)
The 13 Mini/13/13 Pro/13 Pro Max: As always, whenever Apple seemingly levels the playing field for its iPhones, it introduces a differentiator. The 13 Mini and 13 had better battery life and the Sensor Shift technology, but the flagship 13 Pro and 13 Pro Max, while having the best cameras of their generation, also debuted variable refresh rate. Pro and Pro Max had screens that could crank up the refresh rate all the way up to 120 Hz and bring it all the way down to 10 Hz, depending on the content being displayed on screen. This helped the devices increase battery life massively.
Maybe it's an attempt to upsell people — someone looking to buy an iPhone could be theoretically tempted by incremental features and a USD 100 jump in price to go from a base iPhone 13 Mini to a 13, from a 13 Pro to a 13 Pro Max.
Whether or not this feature will be part of iOS 16 remains to be seen. We will find out next Monday when the 2022 edition of the Worldwide Developers Conference begins at Cupertino in California.
Also read:Apple set to unveil iOS 16 at its next event on June 6
(Edited by : Abhishek Jha)
Check out our in-depth Market Coverage, Business News & get real-time Stock Market Updates on CNBC-TV18. Also, Watch our channels CNBC-TV18, CNBC Awaaz and CNBC Bajar Live on-the-go!