Prices of fast-moving consumer goods such as biscuits and personal care items could continue to rise this quarter as FMCG companies try to counter inflationary headwinds.

Storyboard18 caught up with Mayank Shah, senior category head, Parle Products on the sidelines of Parle Hide & Seek’s new campaign launch where he spoke to us about the impact of the price hike on consumption in urban and rural markets. 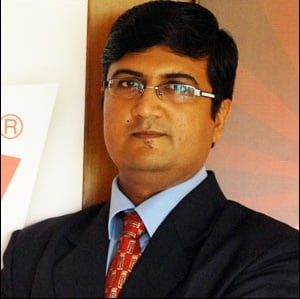 Mayank Shah, senior category head, Parle Products.
He also told us why ad budgets won’t take a huge hit due to the hike. Parle Products owns the world's largest selling biscuit brand - Parle G, which is consumed by millions of Indians every day across the pop strata.
Edited excerpts.
Parle launched a new campaign ‘Start your story with Hide & Seek’ ahead of Valentine's Day. Tell us about the genesis of the campaign and how you arrived at the insight driving it?
The primary objective behind the campaign is to reinforce the brand identity as an ‘enabler’- an enabler for first-time conversations. The campaign highlights the feeling of teenage romance that is often felt during adolescence. It positions the brand as a friend and an enabler or even as a cupid which will help you to break the ice and strike a conversation.
Also Read: Adani Wilmar IPO: All you need to know
It is a nice coincidence that we are launching it around Valentine’s Day. But if we talk about the legacy of the brand, the insight that we worked on was typical if you talk about young innocent teenagers which are the primary target audience for this brand, once they move from a school to junior college, it is completely a different world for them. They are very conscious about it. They are also conscious about whom they should talk to, whom they should approach, etc.
But the fear of rejection, a consciousness about whether you will be able to strike a good conversation with him or her keeps you away from approaching somebody and talking to them. And that is where the brand comes in.
The third wave of Covid-19 has coincided with the price hike. How are these converging pressures impacting consumption?
As of now, there are at least one or two price hikes taken by almost all companies. And we haven’t seen any major impact on consumption. There are two reasons behind it.
Also Read: Colgate initiates talks with FMCG distributors boycotting its products in Maharashtra, other states
First is a certain amount of revenge buying. There’s that feeling among consumers having gone through the first two waves of the pandemic, they are ready to go out and spend. It's about 'living for the day' rather than saving for tomorrow.
Somewhere we are moving towards this philosophy of living for the day rather than saving for a rainy day. Secondly, consumers are rational. When they see prices of commodities going up they also understand that there would be an increase in the prices of finished goods.
For most FMCG players rural markets have shown a lot of promise especially during the pandemic. Even a slight bit of hike in price has a significant impact on the monthly spending of a consumer in rural areas. How is consumption faring in these markets?
We need to look at rural growth through the prism of two years. We saw rural markets growing at a phenomenal pace last year. Over that higher base, we saw further growth and it is still growing.
Also Read: Unilever rejigs business model, lays off 1,500; Nitin Paranjpe new Chief People Officer, to oversee business transformation
Foods as a category grew at 16 - 17 percent last year in the rural areas. This year it has come down to 7- 8 percent. Of course, it is less but it is on a higher base. Compare this to the urban market which was worse affected because of limited market working hours, higher rate of contraction in urban areas, we missed that growing opportunity. So it is making up for that lost potential.
In fact, urban growth was in the low single digits, about 3-4% last year. Now, it is growing at about 8–9 percent. If we look at it from that perspective, rural is still ahead in terms of two years of growth.
Will advertising budgets take a hit owing to the hike and business pressures?
I don’t think ad budgets will take a major impact. Most companies want to take this opportunity to grow and for those who were not able to grow in the last one or two years, it’s a question of probably at least trying and going back to pre-pandemic levels. Not just us, but even other FMCG players would be spending. The primary reason being to have the revenues or top lines almost similar to pre-pandemic levels.
(Edited by : Jomy Jos Pullokaran)
Check out our in-depth Market Coverage, Business News & get real-time Stock Market Updates on CNBC-TV18. Also, Watch our channels CNBC-TV18, CNBC Awaaz and CNBC Bajar Live on-the-go!