With five Grands Prix, two Titanium Lions, a haul of Gold, Silver and Bronze Lions, and an Agency of the Year award, Indian agencies are now shining bright on the world creative map for their cutting-edge and purposeful campaigns.

Five years ago, when Indian creative directors came home from the Oscars of advertising, they had a bag full of inspiration on how to crack the digital code. Cut to 2022. They are returning with a suitcase full of Lions for their cutting-edge tech-driven work.
Dentsu Webchutney created history by winning three Grands Prix in a single year at the Cannes Lions International Festival of Creativity for Vice Media’s campaign ‘The Unfiltered History Tour’. The agency also grabbed a much-coveted Titanium Lion, a category that celebrates game-changing work. The campaign has also become India's highest-ever awarded work in Cannes Lions' history.
Dentsu Creative India also won the prestigious Agency of the Year title. 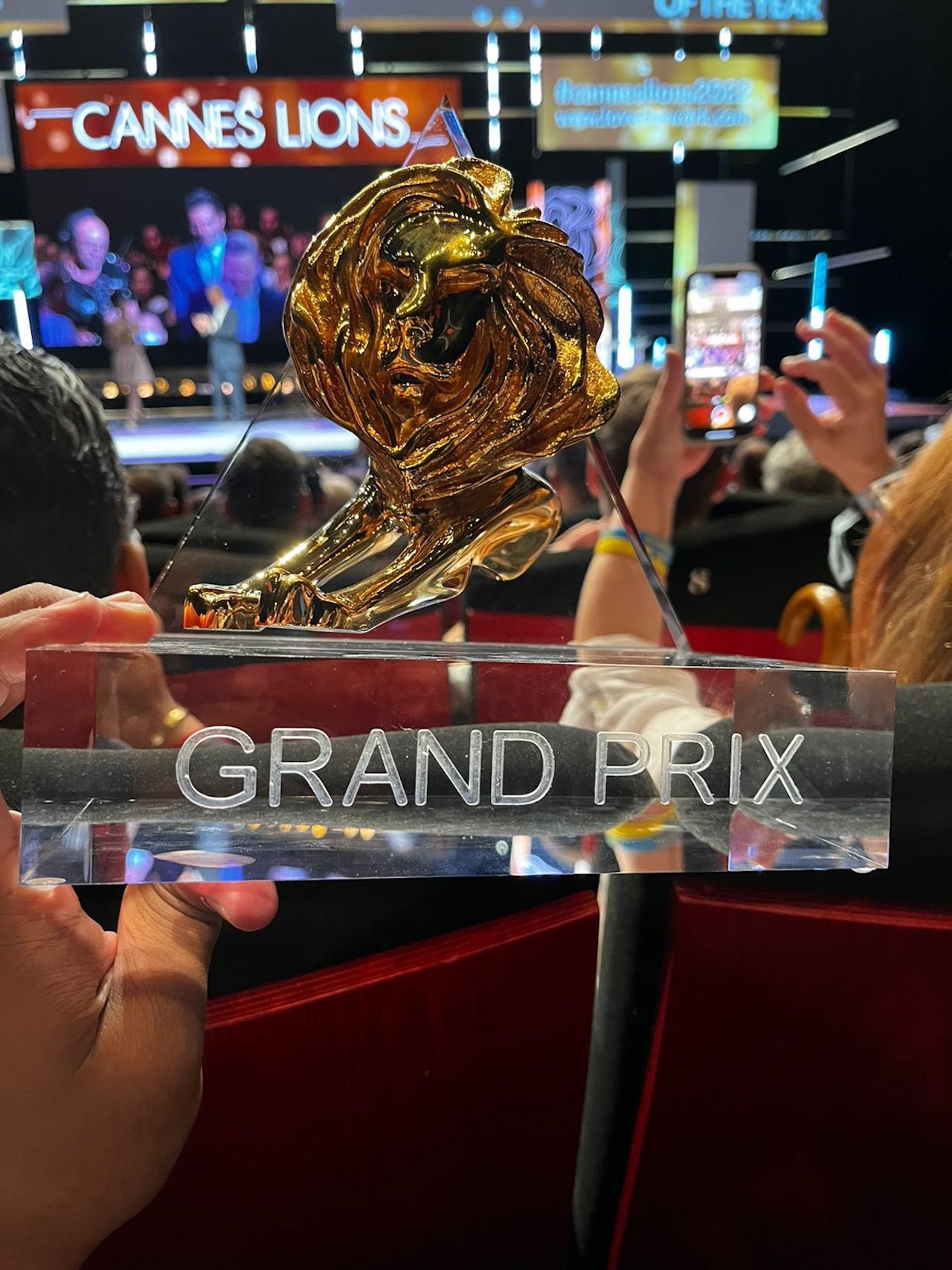 Storyboard18 asked Ajay Gahlaut, group chief creative officer, Dentsu Creative, what makes ‘The Unfiltered History Tour’ a winning campaign. He believes the way the campaign has used creativity and tech to question history has got people interested. Also, its subversive nature has added to its appeal. “The fact that one is bypassing the ‘official’ narrative of the British Museum and accessing an alternate view through technology is very exciting. The campaign has started a conversation all over the world about the evils of colonisation,” he added.
On winning the Agency of the Year he said it's "an emotion I cannot even begin to describe. When I used to watch other agencies win the title I often wondered if I ever would get that same honour". He added, "Not just me I think no one in the entire Indian ad industry has been part of such a huge haul of Lions ever before... I doff my hat to the entire team responsible for the Unfiltered History Tours. Those who are with us now and those who have moved on. Congratulations all.”
What is the Unfiltered History Tour?
The campaign is a guided tour for visitors at the British Museum, which houses some of the world’s most disputed artefacts. Through The Unfiltered Tour, visitors to the museum could scan the artefacts using Instagram filters and unlock an augmented reality (AR) experience that visually teleports the objects back to their homeland. Taking this further, The Unfiltered History Tour also extends into a 10-part podcast series featuring experts from the countries where the artefact was taken from and not from where it’s currently housed. This was done to provide a broader education on the artefacts, as well as the history and ongoing impact of colonialism.
The germ of the campaign idea came up during a casual conversation between the agency’s former chief creative officer PG Aditiya and former CEO Gautam Reghunath. The campaign took about 18 months to come together. Once the campaign took off, Aditiya, Reghunath, and a few others who worked on it, quit to set up a new creative hot shop called Talented.
Credit culture took the spotlight
Dentsu Webchutney has been entering the campaign for awards and has been bringing shiny metals home from across the globe. Every time a few trophies are added to the agency’s shelves, they tag Aditiya, Reghunath, and a few others on social posts giving them due credit and respect. So much so that Gurbaksh Singh, chief innovation officer, Dentsu Creative India, couriered a replica of the Grand Prix trophy to Reghunath before he flew to Cannes and asked him to unbox it when they win. Singh had a gut feeling that the campaign will win big.
The team spirit of Dentsu Webchutney and Talented is setting the right example for the ad industry. It says a lot about how the Indian creative community is becoming more mature when it comes to sharing credit.

When creativity meets data and business transformation
Ogilvy India and Wavemaker made history too by winning a Titanium Lion. The agency got it for its Cadbury Celebrations’ ‘Shah Rukh Khan - My Ad’. In 2020, as a part of the brand’s ‘Iss Diwali Aap #KiseKhushKarenge?’ campaign, Mondelez India’s ‘Not Just A Cadbury Ad’ leveraged artificial intelligence to create hyper-personalised spots for local businesses in around 260 pin codes. It married creativity and tech with a purpose: to promote local businesses at a time when they were worst hit by the pandemic and lockdowns. The campaign tied in with Cadbury's global brand positioning centred on genuine acts of kindness and generosity.
In 2021, in addition to the hyper-personalised brand films that reached the end consumers, local retailers got a chance to make a version of these ads for their stores, using the AI-powered technology developed by Rephrase.ai. Small businesses that are pinned on Google maps could share their custom-made ad featuring Bollywood superstar Shah Rukh Khan through WhatsApp. In these ads, Khan was seen nudging consumers to shop from various local stores. Wavemaker India was the media agency behind the campaign.
The agency also won Gold Lions in categories like Creative Data and Direct.
The other Grand Prix winner
The other Grand Prix this year went to VMLY&R India's 'The Killer Pack' campaign for Maxx Flash in the Health & Wellness Lions. In India, garbage collection points act as major breeding grounds for diseases like dengue and malaria, while mosquito repellent coils are only used to fight mosquitoes inside homes, Maxx Flash decided to change that practice. The mosquito repellent brand introduced The Killer Pack, a 100% biodegradable, innovative packaging lined with 5% Active Probiotic Bacillus thuringiensis, which kills mosquito larvae when disposed of in garbage dumps, dustbins, and stagnant water, helping to break the vicious cycle.
The campaign also won Lions in categories like Creative Commerce and Creative Business Transformation. The agency’s campaign ‘Smart Fill’ for Unilever picked up a Silver Lion in the Sustainable Development Goals category.
These campaigns indicate that at the core of technology-driven work is creativity and data that pushes the envelope and powers marketing strategies.
Purpose-driven narratives win big and a Grand Prix
Historically, India is known for winning big advertising awards for campaigns that are purpose-led. This year too a bunch of purposeful campaigns roared at Cannes Lions.
Leo Burnett India’s campaign ‘The Missing Chapter’ for P&G India’s Whisper got India’s first Grand Prix for Sustainable Development Goals Lions. It’s a category that celebrates creative problem solving, solutions, or other initiatives that harness creativity and seek to positively impact the world.
Leo Burnett India’s film titled ‘The Missing Chapter’ is a part of the brand’s #KeepGirlsInSchool movement. It was designed to illustrate how a girl’s lack of period education contributes to her missing school days, a situation exacerbated by the glaring absence of period education in Indian textbooks. The same campaign won a Silver Lion in the category Health & Wellness.
Dheeraj Sinha, CEO Leo Burnett, South Asia & Chairman BBH India, tells Storyboard18 that what makes this an award-winning campaign "is perhaps both that fact that it balances creativity and purpose while also helping the brand scale up and meet its business objectives. It is an impactful campaign that makes a real difference to both consumers and the business itself."
He further indicated, "one of the biggest problems holding girls back is a lack of period education. 23 million girls fall out of the education system because they don’t understand what’s happening to them. The missing chapter is another initiative towards keeping girls in school. It's real in its impact."
Rajdeepak Das, CEO and chief creative officer, South Asia, Leo Burnett, tells us that the campaign also took a granular approach. "We decided that if the girls don’t have access to the chapter on period education, we will take the chapter to them. Thus evolved the idea of using one of India’s oldest communication forms – ‘wall-art’ to spread period education by taking this chapter to India’s smallest towns and villages," he explains.
After identifying 28 art styles specific to the geography of each state, the agency worked with local artists to create custom hand-drawn paintings centred around ‘The Missing Chapter’ on periods. Hyper-localized in 28 different languages, slogans with catchy lines were crafted to bust period myths along with a 3-step visual aid on how to use a pad. These paintings have been put up on school and village walls – a place no girl can miss seeing these.
Indian Lions roar on the global stage
FCB India is the other Indian agency that got home Lions. FCB India and Kinnect a bunch of Lions for SOS Children’s Village India’s ‘Chatpat’ campaign. In the Film category, which was announced on the last day at Cannes Lions, the campaign got a Silver and Bronze Lion each. DDB Mudra’s ‘Machine-Gun Mouth’ spot for Battle Battlegrounds Mobile India promoted responsible gaming. Made by Early Man Films this ad picked a Bronze Film Lion.
VMLY&R India’s campaign ‘Adeli’ done for Unipads was India’s only winner in Glass Lions. The agency picked up a Bronze Lion.
From period talk to addressing the ongoing impact of colonialism, Indian agencies took on several purposeful subjects and married data, tech and creativity to create impactful work for clients and at the same time make history at the Cannes Lions.