The big takeaways from Zomato's operations

Updated : October 04, 2019 03:48:43 IST
Several restaurateurs had started a #logout campaign on social media for this very reason but Zomato has listened to them and made changes to the Gold Programme.
Zomato also wants to do good by its people, be it employees or delivery men. So it has started a Sunday school for the children of delivery partners.
Recently to mark its 11th anniversary, the company organised a Town Hall, where the highest performing delivery partners were there with their families.

Zomato has been beset by a raft of controversies in the recent past — a full-blown tussle with restaurants — but the company has shown a rare resilience to fend off setbacks.

Take a look at the business.

Revenues are up 225 percent and earnings before interest, taxes, depreciation, and amortisation (EBITDA) loss is 40 percent lower in September 2019 compared with March 2019, according to a report released by Zomato.

In April 2019, the company was delivering food in 200 cities. Today, that spread has increased to 500 cities. Volumes in the top 15 cities have doubled in the last year while the remaining cities already bring in 35 percent of orders. 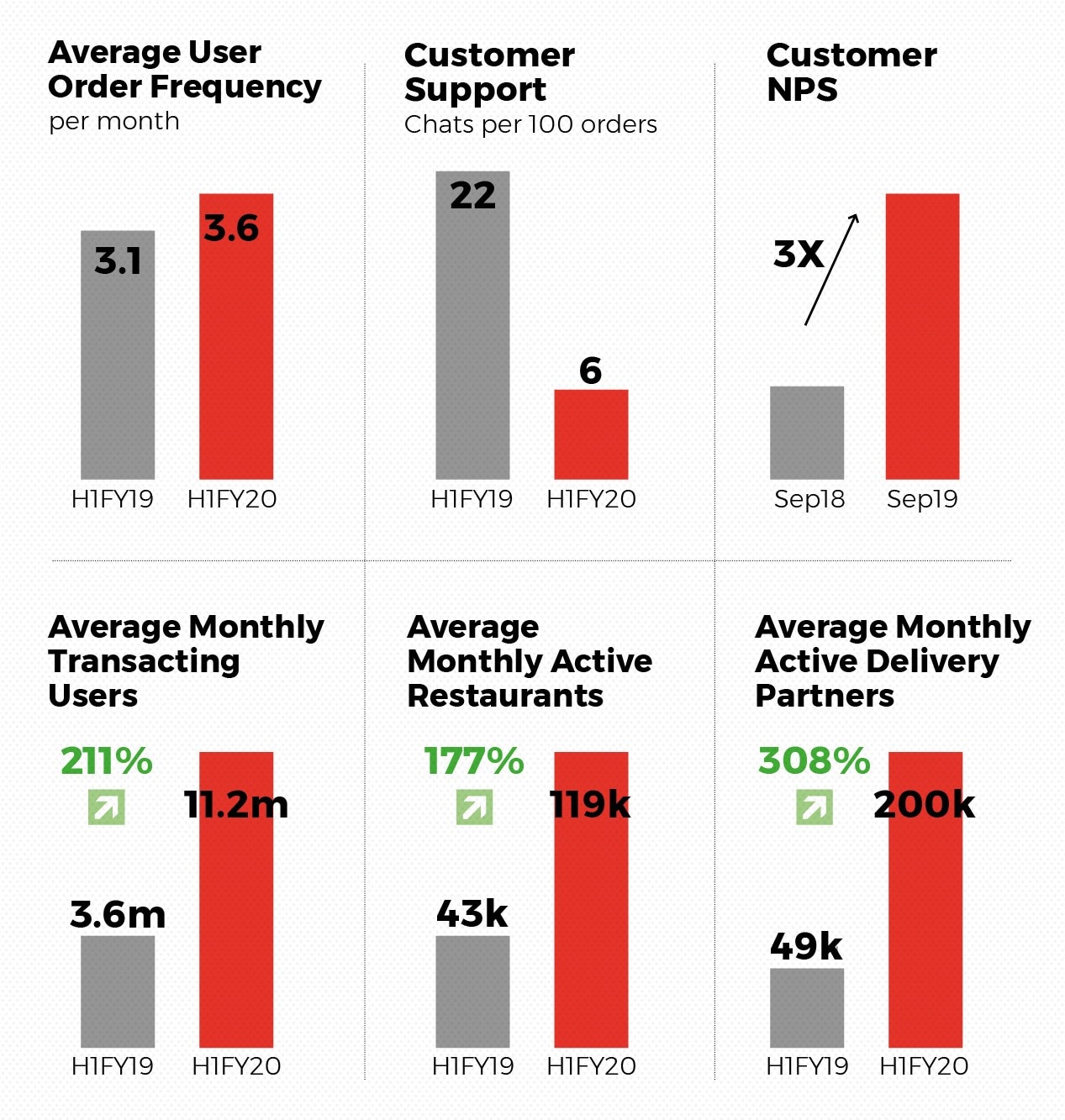 Zomato’s food@work initiative is already doing 3 million orders a month. Making all this possible — making sure your food shows up on time — are more than 2,00,000 delivery partners.

New restaurant listings have grown by 144 percent since last year. Table reservations have grown organically from 8,00,000 in January 2019 to over 1.3 million in September 2019 with zero investment, according to the report.

There is scope for improvement in the Gold Loyalty Programme, where less than 5 percent restaurants participate in it, whereas 1.4 million members worldwide have signed up. This is probably because the heavy discounts that food aggregators expect from the restaurants are not sustainable for them, and they are at odds with Zomato, Swiggy, and Uber Eats about it. Several restaurateurs had started a #logout campaign on social media for this very reason but Zomato has listened to them and made changes to the Gold Programme. Those restaurants have signed on since then have seen 100 percent change in their revenues, according to the company.

A third party report validated the Gold Programme’s benefit to customers and restaurants and stated:

Zomato has started sustainable campaigns such as ‘Hyperpure’ to supply clean and fresh ingredients to their restaurant partners.

Revenue from Hyperpure for the first half of this year (H1) stands at $6.5 million. In the past six months, they “have successfully executed over 65,000 orders for 2,200 restaurants across Delhi and Bengaluru. On an average restaurants place 5-7orders every month, with an average order value of $100 (Rs 7,000)”, said the report.

Keeping in mind global climate concerns and food wastage, Zomato has also started collecting used cooking oil and processing it at their facilities and delivering this to biodiesel manufacturing facilities. This fuel emits 75 percent less carbon than diesel/ petrol. So far, Zomato has collected 130 tonne of used oil per month, from over a 1,000 kitchens in Delhi National Capital Region (NCR), and will expand this operation to five more cities, from this month onwards.

Zomato also wants to do good by its people, be it employees or delivery men. So it has started a Sunday school for the children of delivery partners. The company has also put in place 26 weeks paid leave system for new parents (men and women) and provide $1,000 (Rs 70,000), endowment.

Recently to mark its 11th anniversary, the company organised a Town Hall, where the highest performing delivery partners were there with their families. Zomato also distributed 1,00,000 meals to the underprivileged, across 11 countries, with help from ‘Zomans’ and Feeding India’s Hunger volunteers.

"Feeding India distributed 78,300 monthly meals to the underprivileged in the first month of this year. This figure has now skyrocketed to over 1.6 million meals a month in September 2019. Feeding India now has over 22,500 volunteers in 95 cities, up from 8,500 volunteers in 54 cities in January 2019," said the report.

A ‘Founder’ scheme has been launched, wherein the company pick a person who embodies qualities that are important for Zomato’s continued success, and they allow this person to make decisions on behalf of the company.