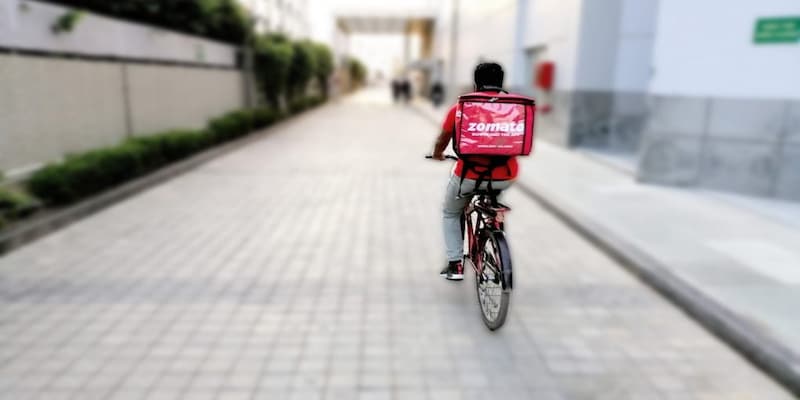 As the lockdown gets lifted in most parts of the country, startups are slowly getting back on their feet.

From food-tech company Zomato doubling its revenues to $394 million, a 105 percent jump from the previous year, online travel platform ixigo reinstating its employees' salaries to Sequoia Capital India raising $1.35 billion, the startup ecosystem is slowly gaining some positive momentum.
So here are the top 5 startup stories that made headlines this week:
#1. Zomato expects complete recovery in 3-6 months, cuts monthly burn rate by over 90%
Food-tech company Zomato, which has taken a massive hit on business during the COVID-19 crisis, said it is expecting to make a complete recovery of monthly revenues in the next 3-6 months. The company also said it is set to cut its monthly burn rate to under $1 million in July compared to $12 million in March this year.
The statement comes as part of Zomato’s annual report where it also highlighted its fiscal performance in FY20, during which it more than doubled its revenues to $394 million, a 105 percent jump from the previous year.
The company saw costs grow 47 percent in the fiscal, with EBITDA losses growing marginally to $293 million compared to $277 million in FY19.
While FY20 was a strong fiscal for the company, where it also saw its food delivery GMV more than double to $1.4 billion from $718 million in FY19, Zomato said the COVID-19 crisis has already set it back by a year. Moreover, the company has also reinstated salaries.
#2. ixigo reinstates full salaries, grants discounted ESOP to employees
Online travel platform ixigo has reinstated salaries of its employees starting July and will also give employees ‘deeply discounted’ ESOPs to cover up the loss in pay for the last three months.
In the wake of the coronavirus pandemic, the company had announced graded pay cuts across its team. ixigo co-founders had foregone their entire salaries and the leadership team took over 60 percent pay cut that was graded by pay. The rest of the staff mutually agreed to a 20-50 percent pay cut depending upon compensation brackets.
ixigo co-founder and CEO Aloke Bajpai said, "We expect to get back to 50 percent of our pre-COVID-19 revenue level by the end of 2020."
#3. Video app battle heats up, Facebook officially brings Reels to India
After the government's ban on Tik Tok, social media giant Facebook jumped on to the Tik Tok-styled short-video app bandwagon and announced a new feature 'Reels' in India. Reels is a video-editing tool designed to let people create Tik Tok-like 15-second videos on Instagram.
The new feature extension Reels started rolling out to users in India from 7:30 pm on July 8. However, the feature, for now, will be available only to a few selected influencers, public figures, and creators.
Facebook has been testing this feature for some time now, and has officially announced the extension of this testing. India is the fourth country to receive this new feature after Brazil, Germany and France.
#4. Sequoia Capital India raises $1.35 billion across new funds
Sequoia Capital India raised $1.35 billion across two funds to be deployed across stages. The investment firm raised $525 million in a venture fund, which will invest in early-stage startups, and an $825 million growth fund to target growth-stage startups, Managing Director Shailendra Singh said in a LinkedIn post on July 6.
The new fund also brings Sequoia India’s assets under management to over $5.5 billion, making it India’s largest venture/early-stage fund manager by far. Other funds such as Accel, Nexus Venture Partners and Matrix Partners India have committed around $1-1.5 billion to India so far.
Sequoia will continue to invest in startups from India and Southeast Asia, a strategy it has followed for the past few years. It last raised a $695 million fund, its sixth, in 2018, following which it extended the fund by $200 million in 2019.
#5. Unacademy, Freshworks, Uber - acquisitions this week
This week was also buzzing with a lot of acquisition news. Facebook-backed online learning platform Unacademy acquired postgraduate medical entrance exam preparation platform PrepLadder for $50 million. With this move, Unacademy will strengthen its presence in medical entrance examination categories such as NEET PG and FMGE.
SaaS company Freshworks acquired IT cloud management platform Flint for an undisclosed sum. With this acquisition, Freshworks hopes to bolster its IT service management and IT operations capabilities with the acquisition.
Globally, ride-hailing platform Uber acquired food delivery startup Postmates for $2.65 billion in an all-stock deal. The buyout comes at a time when Uber is trying to grow its share of the on-demand food delivery segment as it works to sustain its business during the pandemic.
Well, these were the startup stories that made their way to the top five. In other news, hospitality chain Oyo and videoconferencing platform zoom were in the limelight this week.
After furloughing thousands of employees amid the coronavirus pandemic, SoftBank-backed Oyo has decided to offer all its employees, including furloughed employees, deeply discounted ESOPs. The company claims that the ESOPs would be worth Rs 130 crore. The program is subject to requisite board approvals which Oyo hopes to obtain in the next few weeks.
Video-conferencing platform Zoom reiterated that it is a US-based company with offices in China, after facing heat from some sections in the country as the anti-China sentiment is on the rise.
After facing pressure from the government to comply with the rules to disclose the country of origin on products listed on their platforms, ecommerce companies have started working with sellers to ensure these details are updated. The companies are already mandated to display the country of origin for products listed on the platform, as per the Legal Metrology (Packaged Commodities) Amendment Rules, 2017. The rules mandate that the name of the country of origin or manufacture or assembly in case of imported products be mentioned on the package, and that ecommerce entities have to ensure mandatory declarations on their platforms.
These rules came into effect from January 2018, and cite penalties for non-compliance.
Check out our in-depth Market Coverage, Business News & get real-time Stock Market Updates on CNBC-TV18. Also, Watch our channels CNBC-TV18, CNBC Awaaz and CNBC Bajar Live on-the-go!