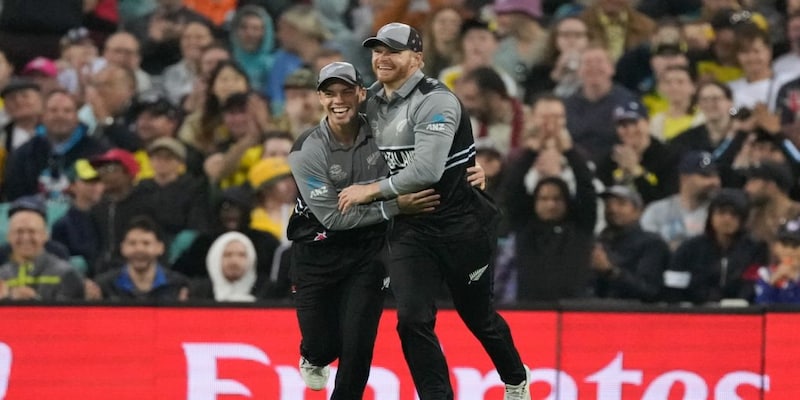 Glenn Phillips takes a stunning catch in the deep to dismiss Marcus Stoinis in the T20 World Cup match between Australia and New Zealand in Sydney.

He ran, he flew and he caught! Marcus Stoinis had to walk back to the dugout! The first match of the Super 12 round of the ongoing T20 World Cup Down Under might have witnessed the catch of the tournament already. New Zealand’s Glenn Phillips produced a scintillating piece of fielding during Australia’s innings.

Also Read |
T20 World Cup: New Zealand thrash defending champions Australia by 89 runs in Super 12 opener
The sensational moment came on the third ball of the ninth over off Mitchell Santner’s bowling. Marcus Stoinis tried to go inside out over cover but skied it. Phillips ran from deep cover point and dived to take a blinder to dismiss Stoinis. The Kiwi went with both hands to take the stunning catch.

We can reveal that this catch from Glenn Phillips is one of the moments that could be featured in your @0xFanCraze Crictos of the Game packs from Australia v New Zealand.Grab your pack from https://t.co/8TpUHbQQaa to own iconic moments from every game. pic.twitter.com/VCDkdqmW3m— ICC (@ICC) October 22, 2022

Earlier, New Zealand posted a mammoth 200/3 in their quota of 20 overs after being put into bat, thanks to Devon Conway’s 92* and opener Finn Allen’s blitzkrieg 42. Jimmy Neesham also chipped in with 26* off 13.
Also Read | T20 World Cup Points Table: New Zealand beat Australia to go on top of Group 1
In reply, Australia were bundled out for 111 to give New Zealand an 89-run victory. Tim Southee and Santner took 3 wickets each. This is Black Caps’ first win in Australia since 2011.
Check out our in-depth Market Coverage, Business News & get real-time Stock Market Updates on CNBC-TV18. Also, Watch our channels CNBC-TV18, CNBC Awaaz and CNBC Bajar Live on-the-go!