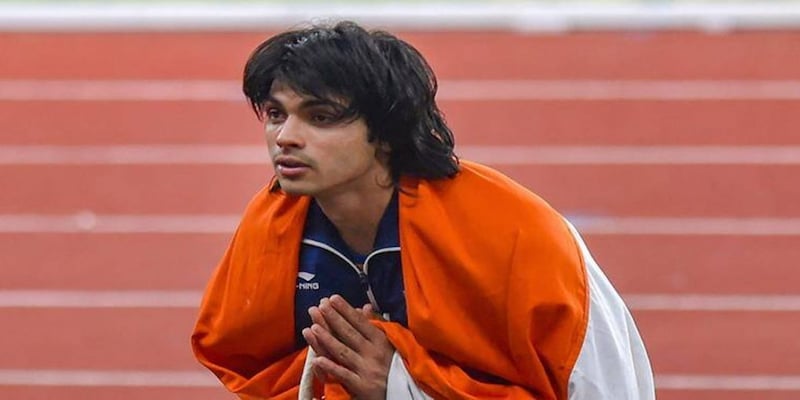 Apart from dancing with the crowd, the World Championship silver medalist also addressed the people from the stage

Olympic gold medallist Neeraj Chopra may not be able to participate in the National Games 2022 in Ahmedabad as he is recovering from an injury, but the javelin star joined the crowd in the ongoing Garba celebrations during Navratri at one of the famous venues in Gujarat’s Vadodara.

Apart from dancing with the crowd, the World Championship silver medalist addressed the people from the stage.
“Kemcho?” he asked the crowd in Gujarati while wishing everyone “Happy Navratri”.
The javelin star’s fans responded with slogans such as “Garam hot siro, Neeraj bhai hero.”

Olympic Gold 🥇Medalist and World Champion @Neeraj_chopra1 🇮🇳 joins in to enjoy garba in #Vadodara, which is part of the Navratra celebrations in Gujarat, during his visit for the #36thNationalGames pic.twitter.com/Zj0UDpbw3l— SAI Media (@Media_SAI) September 28, 2022

After being warmly welcomed by fans, Chopra, who was wearing a Gujarati outfit, was seen offering prayers and performing Garba to the tunes of Gujarati folk music. The video has gone viral on social media.

Chopra had earlier said he will not be participating in the 36th National Games this year, which will be inaugurated by Prime Minister Narendra Modi in Ahmedabad today, September 29.
ALSO READ:
Reliance Retail launches its fashion and lifestyle store AZORTE in Bengaluru
Chopra had said that he would have participated in the Asian Games but the dates had been postponed.
Following his triumph at the Diamond League in Zurich, Chopra said he had consulted his coach, who advised him to skip it and “rest and prepare for a crucial season next year”.
Speaking at the National Games Sports Conclave on Thursday, Chopra said it was never easy for an athlete to return from injuries.
“After the injury, the athlete is forced to answer the question -to continue or not. It all depends on how you answer the question. I decided to keep going both times," The Times of India quoted Chopra as saying.
India’s javelin throw ace pulled out of the Commonwealth Games 2022 in Birmingham earlier this year as he was recovering from a groin injury suffered at the World Athletics Championships.
ALSO READ: Digvijaya Singh joins race for Congress president post
(Edited by : Sudarsanan Mani)
Check out our in-depth Market Coverage, Business News & get real-time Stock Market Updates on CNBC-TV18. Also, Watch our channels CNBC-TV18, CNBC Awaaz and CNBC Bajar Live on-the-go!