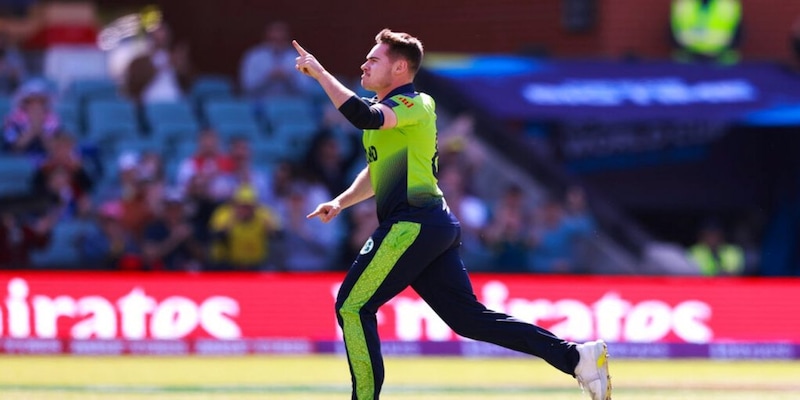 The Ireland pacer is only the second bowler to take a hat-trick in this edition of the T20 World Cup.

It was a memorable outing for Ireland pacer Josh Little in the T20 World Cup match against New Zealand in Adelaide on Friday, November 4. He became only the second bowler to take a hat-trick in the ongoing T20 World Cup.

The left arm pacer achieved the landmark in the 19th over of the New Zealand innings. His prized scalps in the hat-trick were Kane Williamson, James Neesham and Mitchell Santner. While Williamson was caught in the deep on the leg side as he went for a pull, Neesham and Santner were trapped lbw by Little. He finished with figures of 3/22.
Watch Little’s hat-trick:
View this post on Instagram

New Zealand posted 185/6 in their 20 overs. Skipper Williamson top scored with 61. Finn Allen and Daryl Mitchell scored 32 and 31 respectively. For Ireland, Gareth Delany picked up 2/30.
Before Little, UAE spinner Karthik Meiyappan picked up the first hat-trick of the tournament against Sri Lanka.
Overall, Little is only the sixth bowler to take a hat-trick at the T20 World Cup. Before Little and Meiyappan, Brett Lee, Curtis Campher, Wanindu Hasaranga and Kagiso Rabada have taken hat-tricks at the mega event.
Check out our in-depth Market Coverage, Business News & get real-time Stock Market Updates on CNBC-TV18. Also, Watch our channels CNBC-TV18, CNBC Awaaz and CNBC Bajar Live on-the-go!