With European football still warming up, this is the right time to reflect on the business and financial trends of the top five European leagues in the 2020/21 season and what the future holds for these leagues. Below we take a look at how Europe's top leagues stack up against each other in terms of finances, as computed in Deloitte's Annual Review of Football Finance 2022. For this report, Deloitte took into account the 2020/21 season of European football.

The 2022/23 season of the European football season is underway. Among the top five European football leagues — Premier League, La Liga, Bundesliga, Ligue 1 and Serie A — the EPL, Ligue 1 and Bundesliga were the first to get in the thick of the action as they kickstarted on August 6. A week, later the football started rolling in Serie A and La Liga.
It is still early days but the first two weeks of action in Premier League, Ligue 1 and Bundesliga have followed a familiar and expected trend. Manchester City, Paris Saint-Germain (PSG) and Bayern Munich find themselves at the top of the Premier League, Ligue 1,  and Bundesliga respectively by winning their first two matches. In Serie A and La Liga, last season's winners, AC Milan and Real Madrid have won their season openers.
While Manchester City, PSG, Bayern,Real Madrid and AC Milan are favourites to win their respective domestic leagues, a lot can still unfold in the following nine months considering that this European football season would be unlike any season seen in the past. It would be so because the football leagues across Europe will come to halt as some players will head to Qatar for the 2022 FIFA World Cup, which is slated between November 20 and December 18.
Also Read: As Glazers face the heat, here are the people linked to buying Manchester United
With European football still warming up, this is the right time to reflect on the business and financial trends of the top five European leagues in the 2020/21 season and what the future holds for these leagues.
Below we take a look at how Europe's top leagues stack up against each other in terms of finances, as computed in Deloitte's Annual Review of Football Finance 2022.
For this report, Deloitte took into account the 2020/21 season of European football. Two key points to be noted while understanding the business of the football leagues are as follows:
The size of the European football market in revenue terms actually grew despite the absence of fans for a majority of the 2020/21 season. The market grew by 10 percent to €27.6 billion. The boost came because of the UEFA Euro 2020, which was held in the 2021 summer across the major European cities.
Key takeaways from Deloitte's Annual Review of Football Finance 2022 are as follows:
The influence of the Premier League, La Liga, Bundesliga, Serie A and Ligue 1 on the European football market continues to increase. Their contribution to the European football market far outweighs the contribution of other top leagues, FIFA, UEFA and national associations put together. The pandemic saw the contribution of the 'big five' dip in 2019/20 before picking up in 2020/21. 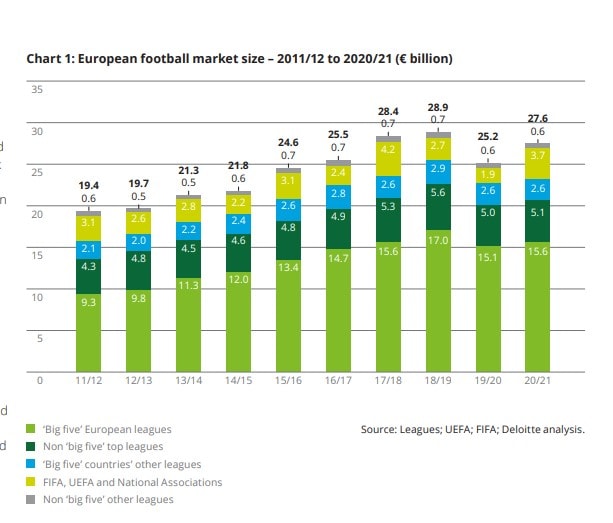 Image: Deloitte's Annual Review of Football Finance 2022 Reports
The 'big five' European leagues recorded total a revenue of €15.6 billion in 2020/21, an increase of 3 percent from  2019/20. More concerningly though, when excluding the Premier League, the 'big five' reported increased operating losses during the year, from €461 million to €901 million.
Below is the figure which explains the revenue of the 'Big Five' European Leagues Image: Deloitte's Annual Review of Football Finance 2022 Reports
While England's Premier League is a clear number one on the financial scale, Germany's Bundesliga and Spain's La Liga are in an interesting contest to claim the second spot. When the revenue from 1996/97 to 2011/12 of 'big five' European league clubs were plotted on a graph, Bundesliga's and La Liga's graph lines followed almost a similar trajectory, sometimes intertwining each other. Image: AP
Serie A clubs experienced the greatest percentage growth in aggregate revenues of any 'big five' league in 2020/21, increasing 23% to a record high of €2.5 billion. It was also the only league in 2020/21 that reported more revenue in 2018/19. The growth was basically driven by broadcast revenue. Image: FootballFactly Twitter
In 2020/21, Ligue 1 clubs' revenues (€1.6 billion) fell further behind the nearest rival Serie A (€2.5 billion) as the divide between the two leagues doubled to over €0.9 billion. Ligue 1 clubs failed to achieve significant growth in 2020/21, with just a 1 percent revenue increase from the pandemic-hit 2019/20 season. Worryingly, 2020/21 was the 14th consecutive year of combined losses for Ligue 1 clubs, as each Ligue 1 club recorded an operating loss for the season with total losses more than doubling in the last two disrupted seasons.
There is a sense of optimism for the 'big five' as with COVID-19 restrictions no longer in place,  the fans have crowded the stadiums starting from the 2021/22 season.  The UEFA's new broadcast deal for 2021/22 to 2023/24 has increased revenues for the participating clubs. Deloitte's Annual Review of Football Finance 2022 report predicts that the 'big five' leagues will generate a record level of €18.6 billion in aggregate revenue for the 2022/23 season of European football.
Two other key points mentioned in the report
1. As the Premier League enters its fourth decade, it seemingly will remain the leading football league.
2. European football is emerging from one of its most challenging periods in history as live, unscripted drama has drawn fans back to stadia and continues to be unmissable content for broadcasters.
(Edited by : Abhishek Jha)
Check out our in-depth Market Coverage, Business News & get real-time Stock Market Updates on CNBC-TV18. Also, Watch our channels CNBC-TV18, CNBC Awaaz and CNBC Bajar Live on-the-go!