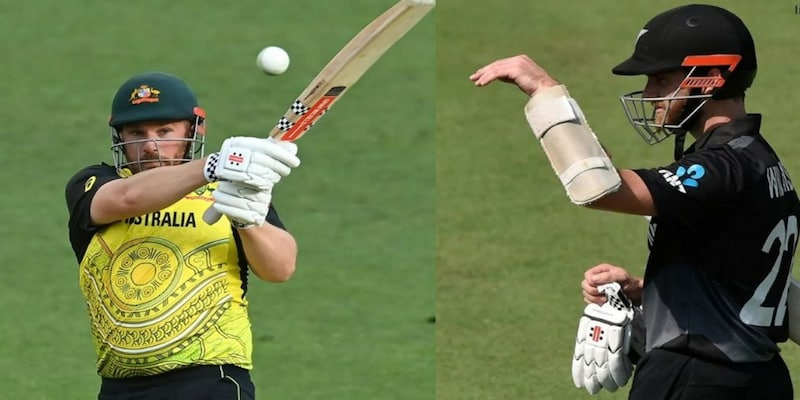 The first Super 12 match of the ICC T20 World Cup 2022 between trans Tasmanian rivals Australia and New Zealand is under the threat of being affected by bad weather. The rematch of the last year's T20 World Cup final could be dampened as there is a 90% chance of rain in Sydney.

The Super 12 stage of the ICC T20 World Cup 2022 will take off with trans Tasmanian rivals Australia and New Zealand locking horns at the Sydney Cricket Ground on Friday.

The match is a repeat of the 2021 T20 World Cup final in which Australia outsmarted New Zealand by 8 wickets to win their first ICC T20 World Cup title.
Shaky buildup for the defending champions
Build up for the defending champions for the showpiece event has been shaky with the team suffering series losses against India and England. Australia only  managed to put aside a struggling West Indies.
In their T20 World Cup warmup match against India, Australia were cruising 171/5 chasing 187 to win. But Mohammed Shami's last over heroics and Virat Kohli's electric efforts in the field meant that Australia succumbed to 180.
Watch: Virat Kohli takes a stunning catch in India's T20 World Cup warm-up match against Australia
Finch would have wished that putting the poor results behind the team should have been his only concern. But the team has been struck with injury issue after Josh Inglis, the reserve wicketkeeper and a spare batsman, was ruled out due to a hand injury. But with allrounder Cameron Green called up to replace Inglis, Australia now have a potential matchwinner that they initially left out from the World Cup squad.
Green was part of Australia's T20I set-up in the leadup to the World Cup but missed the bus once the World Cup squad was announced. The 23-year-old struck a couple of fifties against India and then picked two wickets against West Indies. Green is also a regular for Australia in Tests. With Green Australia have beefed up their depth in the allrounders, with the likes of Mitchell Marsh, Glenn Maxwell and Marcus Stoinis already in the squad.
But one player who will be hogging all the attention whenever Australia will be taking field in this World Cup will be Tim David. Singapore born David was made part of Australia's T20 World Cup squad after he impressed with his batting exploits in league cricket. David had moved to Western Australia with his Australian family when he was 2 and was raised in Perth.  Before making his T20I debut for Australia, David played 14 T20 matches for Singapore in 2019 and 2020, averaging 46.5 with the bat. Australia will be counting on David's ability to go big and clear the boundary almost at will.
Blackcaps low on confidence too
New Zealand would be low on confidence too after they were bundled for just 98 in the warmup match against South Africa. Before that, the Blackcaps lost the T20I tri-series at home against Pakistan. New Zealand skipper Kane Williamson would be relying on his experienced pace duo of Trent Boult and Tim Southee along with the express pace of Lockie Ferguson to dent the opposition batting lineup. The Kiwi's batting lineup is studded with hard-hitters in Glenn Phillips, Daryl Mitchell and Jimmy Neesham but Williamson remains the run-scoring engine who is likely to pull the team as far in the tournament as possible.
There is an injury concern in New Zealand camp as well. The hero of their 2021 T20 World Cup semifinal win over England, Daryl Mitchell has a fracture in his finger, is unlikely to be available for this match.
Form Guide (last five matches)
Australia: NR-L-L-W-W
New Zealand: L-W-W-W-L
Australia vs New Zealand Head to Head
Matches played: 15
Australia wins: 10
New Zealand wins: 5
Pitch
Rains in Sydney meant that the pitch has been under cover for a long time. But expect the pitch to be on the drier side. The spinners from both sides could play a huge role in the match.
Weather conditions
According to Weather.com there could be thunderstorms in Sydney on Saturday. The maximum temperature will be 23° C. Chance of rain 80%.
Possible XIs
Australia possible XI
Aaron Finch (C),  David Warner,  Mitchell Marsh,  Glenn Maxwell,  Marcus Stoinis,  Tim David,  Matthew Wade (WK),  Pat Cummins,  Mitchell Starc, Adam Zampa,  Josh Hazlewood
New Zealand possible XI
Devon Conway (WK), Martin Guptill,  Kane Williamson (c), Glenn Phillips,  Michael Bracewell, Jimmy Neesham, Mitchell Santner, Tim Southee, Trent Boult, Lockie Ferguson, Ish Sodhi
Top Fantasy Pick suggestions
Batsmen: Kane Williamson, David Warner, Mitchell Marsh
Wicketkeeper: Matthew Wade
All-rounders: Glenn Maxwell,  Marcus Stoinis, Jimmy Neesham
Bowlers: Trent Boult, Mitchell Starc, Adam Zampa,
Betting Odds (bet 365)
Australia: 4/9
New Zealand: 7/4
Where to watch
The match begins at 12.30 PM IST.  In India, the match will be broadcast on Starsports Network. Online viewers can follow the live action via Disney+Hotstar.
(Edited by : Jerome Anthony)
Check out our in-depth Market Coverage, Business News & get real-time Stock Market Updates on CNBC-TV18. Also, Watch our channels CNBC-TV18, CNBC Awaaz and CNBC Bajar Live on-the-go!