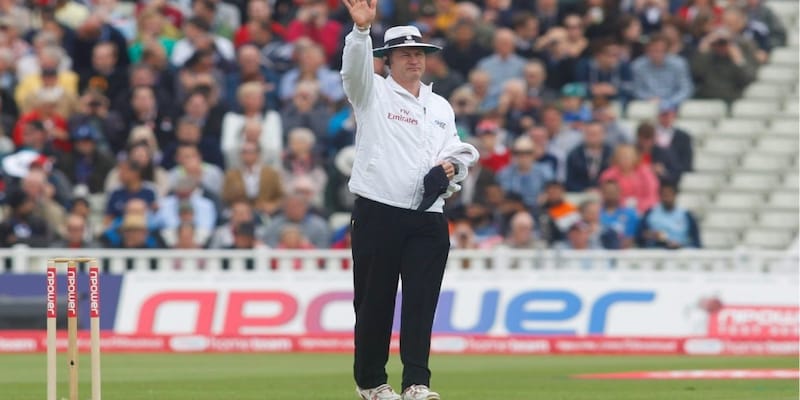 Veteran umpire Simon Taufel has explained the much-debated no-ball controversy in the India-Pakistan match in the T20 World Cup.

Five-time ICC Umpire of the Year Simon Taufel has spoken out on the controversial no-ball decision during India's ICC T20 World Cup 2022 match against Pakistan.

Recap of what happened
The incident occurred on the fourth delivery of the final over of the match. Mohammad Nawaz bowling the over had delivered a no-ball two deliveries ago that Kohli had smashed for a six.
According to the laws of the sport, the delivery after a no-ball is a free hit, on which a batsman cannot be dismissed in any other way except for run-out. Also, the free hit remains in play until a legal delivery is bowled.
But Nawaz immediately after bowling the no-ball bowled a wide, which meant that free-hit remained in play.
What caused the confusion
What happened next caused a controversy to erupt. The next delivery by Nawaz was a full and straight delivery that Kohli wanted to slog for a six but failed to connect and the ball hit the stumps and rolled down to third-man. Kohli and Dinesh Karthik ran three runs.
As Kohli and Karthik were running, Pakistan players protested against the two batsmen being given the freedom to run in between the wickets as they believed the ball should have been declared dead as it had crashed onto the stumps before rolling down the ground.
But the appeal from the Pakistan players was turned down and India was duly awarded three runs. India eventually won the match by 4 wickets adding to Pakistan's frustrations.
Taufel's explanation
Now, Simon Taufel has given his verdict on the decision taken by the on-field umpire in the midst of the heated action. The Australian umpire took to the social networking site LinkedIn to have his say on the much-debated no-ball decision.
Also Read: Virat Kohli made Indians skip doing UPI transactions during his match-winning knock against Pakistan
Taufel wrote "The ICC playing condition is below. The umpire made the right decision in signalling 'Byes' after the batters ran three following the ball hitting the stumps and rolling down to third-man. For a free hit, the striker cannot be bowled and therefore the ball is NOT dead on hitting the stumps-the ball is still in play and all conditions under the Laws for the Byes are satisfied"