Madrid's dominance has almost made the footballing world believe that the club almost owns the competition. Madrid's record in the Champion's League final is truly astonishing. The Spanish club has featured in 17 Champions League finals and as stated above, won 14 of them. Here we look at Real Madrid's five Champions League wins in the past eight seasons.  These five wins can be divided into three phases. Real Madrid La Decima (Image: Reuters)
Madrid's lean run in the Champions League from 2002 onwards had made winning the tenth European title almost a club's dream, an obsession. The obsession to claim the tenth title was termed at ‘La Decima’. By 2014, Italian coach Carlo Ancelotti had been the manager of the team for two seasons. He had successfully guided the team to a Copa del Rey win and to the final of the Champions League. In the "main event" Real Madrid squared off against their cross-town rivals Atletico Madrid in Lisbon, Portugal. Atletico Madrid were coming into the final on the back of winning the La Liga.
The 2014 Champions League final was one of the most thrilling finals played in recent times.
Diego Godín fired Atletico Madrid into the lead as he netted a goal in the 36th minute. Real Madrid's hopes for the title were almost over as the match went into the third minute of the added time. But a lifeline came Real's way as they won a corner. Luka Modrić took the corner and defender Sergio Ramos jumped the highest and headed home the equalizer. The goal from Ramos not only stretched the game into extra time but also broke Atletico Madrid's spirits.
Also Read: Boult, Nicholls in New Zealand squad for England tests but doubts for first game
It was a one-way street from that point onwards as Gareth Bale, Marcelo and Cristiano Ronaldo netted goals in the 110th, 118th and 120th minute respectively to seal a 4-1 victory for their team.
With the win, Real Madrid's obsession for ‘La Decima’ was finally fulfilled.
Zidane's Hat-Trick Zidane wins hat-trick of Champions League titles for Real Madrid (Image: Reuters)
Barcelona's treble in 2014-15 in which they won UEFA Champions League, La Liga and Copa del Rey promoted Real Madrid to appoint football legend Zinedine Zidane as the Club's manager. What followed for Madrid under Zidane was truly remarkable.
First, Zidane made Madrid return to the European summit as they once again defeated Atletico Madrid this time in Milan at the San Siro stadium. It was one goal apiece for both Madrid clubs full time after the extra time and the match went into penalties. Real Madrid won the penalty 5-3 to claim its 11th Champions League.
A point to be noted about Europe's premier club football tournament ever since it was rebranded as UEFA Champions League in 1992 was that no club had managed to win the tournament in back-to-back seasons. So the odds were against Real Madrid winning the Champions League in 2017.
But under Zidane, Madrid defied the tournament's 25 years of history as they thrashed Italian powerhouse Juventus 4-1 at Millennium Stadium in Cardiff to become the first team to win the Champions League in two successive seasons.
But rewriting history was not enough for the Real Madrid side playing under Zidane. The team basked in more glory as they qualified for a third straight final in 2018. This time against Liverpool in NSC Olimpiyskiy Stadium in Kyiv, Real Madrid conceded just once but netted three to complete a hat-trick of UEFA Champions League titles.
Madrid's stunning run in the Champions League came to an end as they were dumped out by Ajax in the round of 16 in the 2019 season.
Return of Ancelotti and return of Madrid at the European helm 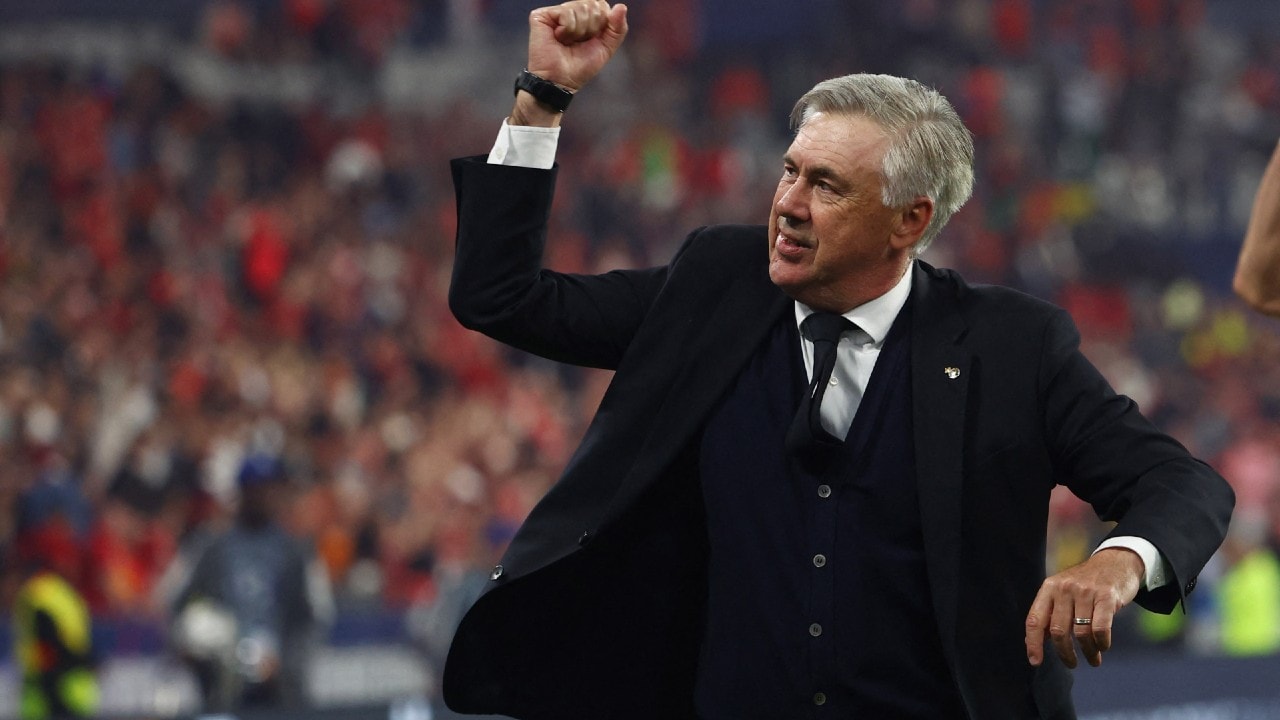 Return of Ancelotti and return of Madrid at the European helm (Image: Reuters)
Ancelotti was reappointed as the manager of Madrid at the start of the 2021-22 campaign. With a few new faces and striker Karim Benzema in the prime goal-scoring form, Madrid stormed into yet another Champions League final.
It was a repeat of the 2018 final as Madrid's opponents were again Liverpool. This final was devoid of all the drama of the preceding finals. Neither did it have goals galore. But Madrid ensured that they were ruthless in front of the goal. The team scored just once thanks to Vinícius jr. and the solid defence did the rest as Madrid won the final for the 14th time in its history.
Also Read: Hardik Pandya 2.0: The all-rounder who can bat, bowl and lead from the front
Check out our in-depth Market Coverage, Business News & get real-time Stock Market Updates on CNBC-TV18. Also, Watch our channels CNBC-TV18, CNBC Awaaz and CNBC Bajar Live on-the-go!